For Freestyle’s Narrative 1 project, students were assigned to write a short fictional story. For animation students, we created a short narrative animation, and in Design, we created creatures in Illustrator based on our narrative’s character.

Inspired by my own struggles, my flash fiction was a simple story about a student struggling with perfectionism, and how he learns to turn in imperfect work. :

The hours turned to minutes, and minutes into seconds. His hand was hovering, quavering slightly, above the keyboard. With every thought that flew through his mind, his hand flinched when he second guessed himself. It was nearing midnight, and the deadline was soon. Too soon. Hardly a sentence was written on his screen, as every time he finished another one, *click, click, click* went the Delete key until it vanished. Nothing he wrote down suited his needs for this paper.

The whole ordeal felt like a puzzle; no matter what he put down, it didn’t quite fit. No matter how close it seemed to fitting, it doesn’t do any good to jam two non matching puzzle pieces together until they’re stuck, and it was difficult to try to lay out all the pieces ahead of time when it feels like one piece has to lead to other.

Tick, tick, tick. His wristwatch clicked its tongue teasingly at him with every second he allowed to go by without making any progress, while his digital clock threw rays of desperation into as eyes as it counted down to the alarm in only 6 hours. The light of his computer made his eyelids beg for rest

Just a page. Just one page or so, and he could shut the document and walk away until tomorrow. No amount of sleep lost is worth this, was it? So he wrote another sentence, but again, it felt wrong. Putting down the words felt like running vinegar over his honey-sweet ideas. No matter what he tried, nothing made sense, it was all wrong. The bitter mess of words sat there taunting him, and he reach a finger towards the delete key. However, he pulled it away.

It felt less like giving up, and more like the relief from the burden of perfection, giving into the natural flaws of a first draft. It almost hurt, having the weight taken off his shoulders suddenly, and he was tempted to go back and write the sentence over again. Against his instincts, he tore his eyes away from the imperfect phrasing and moved on. Why should he bother going back? What purpose did it serve him to second guess every decision he made on something so small?

Every letter felt regrettable, but he pushed through. Soon, another sentence was finished. Then, a paragraph. And finally, a page. The clock struck one A.M. He looked over the page. It was a mess.

A glorious mess, a mess he could use as a stepping stool, a mess he could show as proof of concept. Not a mess he was proud of, but maybe he needed to start with a mess to get anywhere. After all, you need to spill all the puzzle pieces onto the table before you can sort them.

At last, his eyelids gave out. He shut the lid of his computer, satisfied with the nonsense he managed to get out of his exhausted brain. In the dark, he fumbled toward his bed. He collapsed onto his bed, clothes on and teeth unbrushed, as his surviving mental power ascended to nirvana, with a single relaxing thought in mind, something that relieved him of any lingering sense of guilt: He could always revise it in the morning.

For my Design Illustration, I mixed parts of a cat and a beaver, the cat part showing the character’s acute sense of details and imperfections, while the beaver shows how he often stays in his comfort zone, and acts to protect himself from unfamiliar territory. 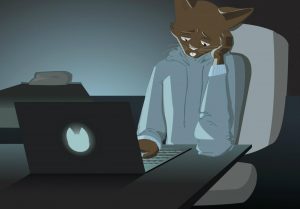 My story this character was based off of is about a boy confronting his perfectionism as he realizes his work habits cause him to fall behind. As he’s writing an essay, he realizes how much time he spends on details and small imperfections. In the end, he decides the best option would be to write whatever comes to mind and let his ideas flow instead of interrupting himself over tiny things.

In the process of making this illustration, I started by sketching everything in the illustration, figuring out how I wanted my composition to work, and making sure I have a clear use of linear perspective. I found that when I originally had a simplistic background, there wasn’t a clear use of linear perspective. I decided to add more to the background to make the setting clear. My main subject, the humanoid cat-beaver hybrid, is a displayal of my character’s personality. The cat parts, the ears and whiskers, show the character’s sensitivity to details, as cats have a great sense of sound and use their whiskers to navigate and feel its surroundings when there’s very little light. The beaver part, the teeth and fur color, reflects on how beavers try and stay in their comfort zones rather than making mistakes, as beavers will make perfect dams and hide in them whenever they can. The teeth, as rodent teeth never stop growing and need to be used to break them down, represent his constant income of ideas, and how not letting his ideas flow does more harm than good. This character is sitting in his bedroom at midnight, in front of his computer, writing an essay. The values are contrasting and the colors cool, to show both harshness in working and relaxation in letting go of perfection.

For my animation, I created a new narrative that would be more appealing to portray visually.  My story is about a strange, forest-dwelling boy, who, although has a sweet heart, doesn’t have the face a normal human has. Insecure about his appearance at first, he learns to overcome his fear of judgement with the help of his friend, a girl who is also out of the ordinary.

Unfortunately, this animation went unfinished, but it’s a project I would love to return to once time allows.