The main goal of the Reflections unit is to take the knowledge from last year, and what we gained from exploring the world around us, and apply it to more introspective projects. Something I learned about myself during this unit was my knack for designing with metaphors. I realized that even subconsciously, I’m always looking for the traits in a character or prop that can tell me something about their personality or purpose. That’s why I really valued the the project in english that required finding items that represent us, and then stylizing them and modeling them in animation.

I always knew I would be a creator of some sort. Since around the age of 3, I would take sheets of paper from the printer on a daily basis to doodle. Fifth grade was when I got my first sketchbook, an unused notebook from my brother. In middle school, my interest in writing fiction spiked. Creating was what I was meant to do: crafting characters, stories, worlds, and, as is inevitable for someone with an anxiety disorder, creating irrational fears.

Unsurprisingly, many artists struggle with similar internal conflicts: feelings of anxiety, depression, Attention Deficit Hyperactivity Disorder, and much more, ranging from mild to intense. Also akin to most artists, my anxiety as well as my ADHD were tightly tied to my art. A lot of what I made was a reflection of my unconventional behavior. I would feel judged when no one was looking, I thought I could never do anything right, no matter what I tried. As these feelings started to loop, I assumed I had somehow brought them upon myself. I didn’t yet know I was genetically predisposed to anxiety.
Sadly, my anxiety did not simply show itself through my art, but limited it. I was constantly comparing myself to other artists, both in drawing and in dancing. A self-fulfilling prophecy formed at every corner; soon, as I transitioned into high-school, I was surrounded by thoughts of mediocrity, assuming I was stuck at my current, unachieving level. My whole life was filled with a constant numbness. The feelings of fear and judgement and self-loathing piled up, creating a maddening weight on my shoulders. The most distressing part of this time in my life was the constancy of it all; there was rarely a day that would go by without some feeling of anxiety. I couldn’t stand another day of not being able to feel more emotions than just anxiousness. I had to do something, anything.
So, I worked up the courage to face what was one of my greatest fears: Asking for help. I told my mom about my focusing and anxiety issues. I saw a therapist. I made weekly visits. And the walls built to deflect any sense of hope were stripped away, brick by brick. As the weeks turned to every other week, and then to months, then a final visit, I had been provided a toolbox. The monster-filled labyrinth that was my mind turned into a car that, although didn’t run very well, was fixable, with my new found tricks and strategies.
After finally facing my fear and taking action to fix my unfortunate circumstance, I was able to lift myself out of my emotional pit with some help from both professionals and friends. Although I’m still trying to improve my mentality, I no longer limit myself because of my own mindset. If I want something done, if I want to get better, I work for it. I learned from experience that sitting in a pool of negativity and absorbing it all through emotional osmosis got me nowhere, and I suffered the longer I waited for things to get better. I learned how to have patience with myself, while also not waiting to long for things to happen on their own. For things to happen, someone or something needs to enact them. I know now how to be a driving force, and I fully intend on using this in the creative industry.

The Perspective Piece was an assignment where we choose any topic we’re passionate about, and write a loosely formed essay on it. My piece was on my frustration with miscommunication, especially between Democrats and Republicans, and how neither side wants to take the time to listen to the other side. We recording this piece and used  Adobe After Effects to edit the audio into a video, to help us practice effects. I feel that, although not very professional sounding, does give an idea of who I am, that I want better communication in the world, and more understanding. 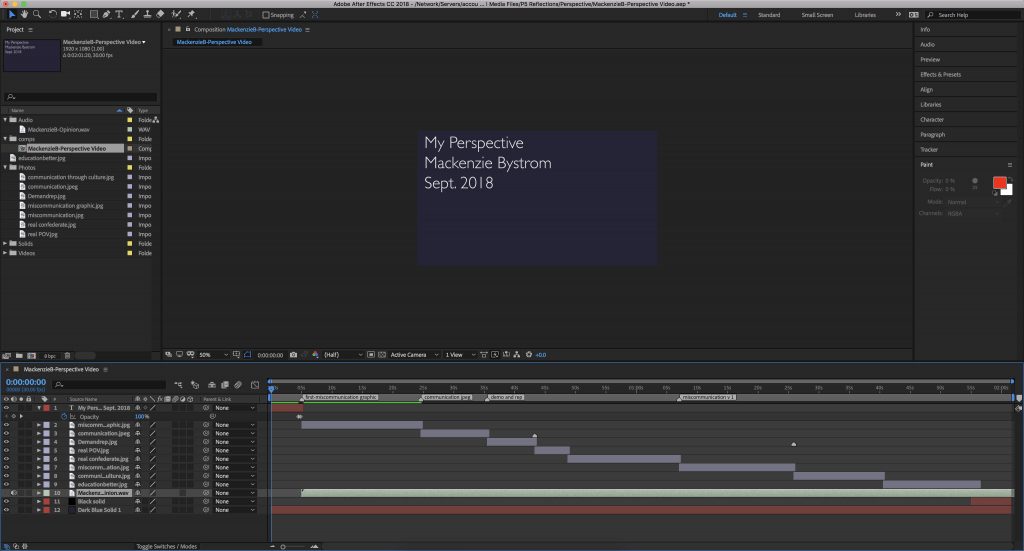 We used After Effects to sync up our audio to images we found fitting to our piece, and used the tools available to change the opacity, scale, and placement on the screen to make the visual effects of the pictures moving and fading out where appropriate. To do this, we create keyframes where we want the image to change. For example, if I make an image fade out for five frames, then I will make a keyframe 5 frames from where I want the image to be faded out, and set that keyframe to 100% opacity, making it fully visible. Then, five frames later, another keyframe will make it change to 0% opacity, making it invisible. Adobe After Effects automatically fills in the frames in between to make the image the proper opacity to give the illusion of the image fading.

The senior’s Animation class, for the first semester, is focusing largely on animating and modeling in a 3D space. Specifically, we are using Autodesk Maya. Our first project in Maya was to model a stylized object. In English, we made a list of “essence objects” that we felt represent us, or something important to us. So, in animation, we took one of these objects, made sketches of many different ideas for how to stylize the object, and modeled it in Maya.