The conceptual view of a world surrounds the metaphorical and aesthetic concept of experimentation and learning. It allows us to present concepts that attribute towards visual metaphors and the explanation of a message through symbolic means. Through this project I was able to learn how to film and direct on a detailed level without the fear of ignorance. I learned detail down to the wire. Such as how to efficiently use camera angles that mean symbolic definitions in a film. I also learned how to use multiple film tools, such as tripods and DSLR cameras. I learned programs such as Adobe After Effects, a variety of google apps, and Adobe Photoshop.

For our first project in Conceptual, we created a short haiku and placed it into video form with a picture symbolizing the poem.

This Haiku i created is called “Skeptic”:

Here is a screenshot of the formatting for the Adobe Premiere editing sequence I created: 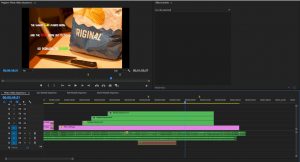 Creating this poem allowed me to understand the relationship between a metaphor and a theme of a general passage. It helped to understand poetry in a way that allows me to understand how to hide a message under visuals and details. The creation of the original photo in the video was the largest learning experience for me as it allowed me to create a vague visual that represents a deep and substantial message. It allows the audience to do some of the work to figure out a meaning. This project also taught me about cutting words, and structure of a poem.

In our learning of the usage of metaphors through visual learning, we created a few more poems to utilize this idea even further. Through our new experience of conceptual thinking we created things such as this conceptual project poem. 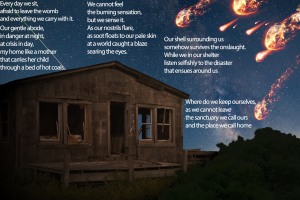 here is a sound cloud recording for those who want to listen and read along.

Here is the freelance poem I created that uses a concept statement that we were randomly chosen with. My concept statement was “the feeling of skepticism through the experience of sharing with others”. We used metaphorical description and sensory details primarily in this poem to enhance the message of the poem.

Every day we sit,

afraid to leave the womb

and everything we carry with it.

in danger at night,

at crisis in day,

that carries her child

through a bed of hot coals.

but we sense it.

As our nostrils flare,

as soot floats to our pale skin

at a world caught a blaze

Our shell surrounding us

While we in our shelter

listen selfishly to the disaster

that ensues around us

Where do we keep ourselves,

as we cannot leave

the sanctuary we call ours

and the place we call home

Here is another poem I created that was called an Ekphrastic Poem. This was a poem that would sit well with an art piece. It was created accompany this art piece shown in the SFMOMA art museum.

This poem is called Annihilation: 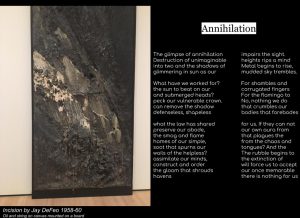 here is a sound cloud recording for those who want to listen and read along.

Here is my poetry intention statement where I explain the details and the message behind this poem!

For our next project, we created an exquisite corpse poem. This was a poem that would be created through some special means. What we did to make this was we created a group of about 10 people. Then we got a piece of paper and wrote our first line of poetry onto it. After that we passed it on to the next person. However through about 2 lines, we started folding over the paper so that the next person had only one line of reference to continue the poem. What we created was this: 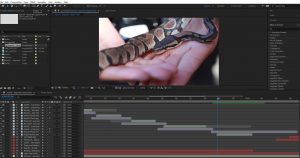 Here is a screenshot of the Adobe After Effects sequencing and editing practice I took to create this.

Creating this poem I valued the process we took to creating it. We were taught how to use many keyboard shortcuts and were trained how to use them effectively. This made me more comfortable with an overwhelming program such as adobe After Effects. I also was able to learn and effectively understand how to use keying and simple animation in videos.

In this assignment we were supposed to take regular at home photos. We then had to enhance the lighting via blending modes and lighting effects that programs such as Photoshop can provide us. In photos that were too dark, we used blending modes such as “screening” to brighten them up. In darker photos we used “overlay” to darken them.

Here are the screening blend photos we experimented with and enhanced:

Here are some brush overlay photos I made to brighten up an object in a photo: 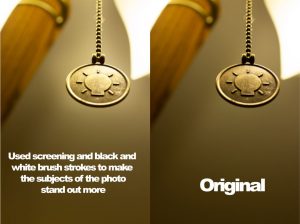 and here are some photos that I blended together to make one photo:

here are some photos where I used multiply to darken the photos: 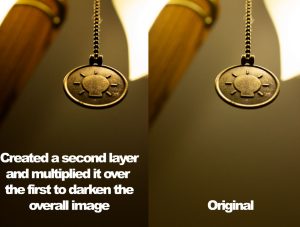 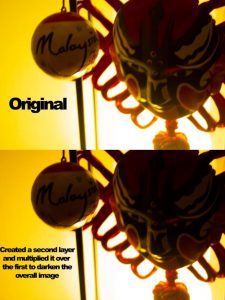 and here are a couple of photos I had some fun with and blended them creatively: 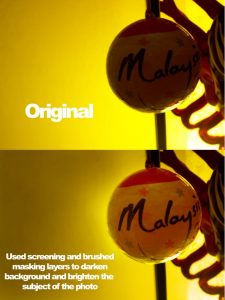 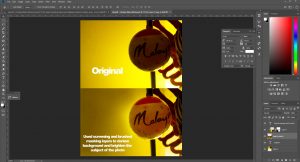 Through this activity I learned how to effectively use DSLR camera and how to take pictures with one. I also learned how to enhance photos, fix lighting issues and make photos look overall better with Photoshop. This helped me understand Photoshop better than I already do and allowed me more tools to play around with.

Our final project was to create an experimental film that combines our skills in metaphorical visuals and sensory detail to express a message.  This film I created was supposed to express the same concept statement I was given for a few of my poems. Which was “the feeling of skepticism through the experience of sharing with others”

This video is called “Ghostwriter:

Through this unit and film, I was able to efficiently express messages and symbolism through visual storytelling and objects. I was able to express detail and link it to a theme and use camera angles and shots to express emotion or story telling.