Hello! My name is Amruta Bhavsar and I am a Design senior at Freestyle Academy. This fall, I will be attending California College of the Arts to study interaction design. Over the past two years, I have cultivated a plethora of skills and interests related to digital design and art, and the two projects that I selected to present reflect that.

In Design, we were tasked with coming up with a movie plot where we are the main character. What I came up with is a horror movie called Vespertine, and the main character (me) has a dog that goes missing one day. I spend weeks looking for him, but can’t find him. Eventually, he makes it back on his own, but seems different. Weird things start happening around the house and the dog acts different and strange. Eventually, I figure out that her dog is dead and his body is just being possessed by a demon, and so I make several attempts to get rid of him before finally figuring out how to do so.

Because the movie centers around the dog, the poster, package, and ticket all do as well. Since the assignment was to keep the design minimalist, I chose to make the graphic on the poster just the eyes and nose of the dog, and it was also creepier that way. To make it extra scary, I made the eyes of the dog red and the pupils really small. I created the font of the title using Adobe Illustrator on an iPad. The letters are supposed to look like they’re made up of little tufts of dog fur while also being tall and skinny to fit the horror aesthetic of the rest of the poster.

The design of the packaging is very minimalistic as well. Each side of the pages have a red claw mark over a textured background, and as you open it, each mark is revealed.

The ticket design is of a red and black paw with claws to stay consistent with the demonic dog theme. All of the graphics were drawn with the pen tool in Adobe Illustrator, and to create the textured background, I took a picture of dust texture and lowered the opacity to about 4%. None of the illustrations are very complex to keep the design clean, simple, and minimalistic.

For this project, we had to create either a cover or an original song using a combination of the music softwares Pro Tools and Reason. The objective was to produce a piece of music using Reason MIDI instruments, Pro Tools MIDI instruments, live musical tracks, and effects to enhance the song. I chose to create an original song, so I started my process by writing out the lyrics. The song is about change and the feelings that come with people in your life leaving and moving on. At the time of the writing of the lyrics, it had really hit me that this was our final year and everything I’d ever known would change after it was over. All my friends and I would be going off to college and the thought that I could possibly never see them again was weighing heavy in my mind.

Because this was a very emotional topic for me, I felt that it was a given that the music itself would have to be depressing as well, so I took a pretty piano piece I really liked that I’d learned in freshman year and sort of improvised it until I found a melody I thought would work. The original piece is called “Flight of the Monarch” and is by one of my favorite contemporary composers, Melody Bober; you can listen to it here. Below is a video of my piano improvisation on it:

I decided on the main melody and then began to digitize it. I created the same melody on a piano in Reason, experimenting with various effects and sounds to get it as close to a real acoustic piano’s sound as possible. Once I had that down, I worked around it with other instruments and added a beat, strings, and supporting pads in Pro Tools.

Here is the final version of the song:

I also created an album cover that I thought fit with the aesthetic of the song. 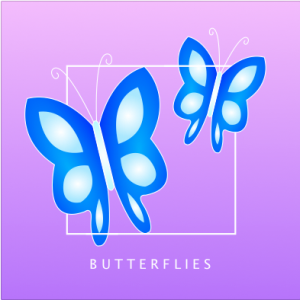