Reflections was the first unit we completed this year at Freestyle, designed to help us explore more about who we are as we start to think about college and our future. In each class, we took part in projects to help us answer the question, “Who am I?” We covered our identities, our perspectives on certain topics, and told stories about our lives to better understand ourselves.  This unit has helped me not just in my college search, but in life in general, as I’ve gained far more self-awareness than I had before the beginning of this year.

The first major assignment we received in English was our personal essay. Through reading Ethan Sawyer’s College Essay Essentials, we learned strategies as to how we would write a compelling narrative about our lives in such a short space.  For me, being able to look back at my life to trace what led me to this point was invaluable. I’m a very future-oriented person and I don’t like to ruminate on the past, but going back to the beginning of my high school experience to write this essay helped me understand how I got here, and take real pride in the hurdles I’ve overcome.

“I sit in my room and struggle to take three deep breaths. It’s 11:30 at night. A blank screen stares back at me, its cursor blinking, mocking me. My World War II essay is due tomorrow, and I sit at my desk, tired eyes, hair disheveled. Panicking.
I’ve always struggled with anxiety. When I was young, it manifested itself as a fear of natural disasters; I refused to go on family trips to Seattle because of Mount Rainier, which looms over the city. I was terrified of a volcano eruption, of all things. In elementary school, it affected me socially, and I had trouble making friends. Once I hit high school, it was impacting me academically. If my writing wasn’t perfect, I’d delete it. First draft or not, people couldn’t lay eyes on my work.
Of course, having such an anxious, perfectionist mindset becomes a self-fulfilling prophecy. I spent so much time worrying about making my work perfect that it became rushed. I would constantly end up in situations like with my WW2 essay, feeling hopeless in the late hours of the night, attempting to write everything, and failing to write anything.
Half of the time I felt clammy and nauseous; I spent long nights sitting on the cold tile of my bathroom floor, hunched over the toilet bowl, expecting to be sick. Nothing ever came up. I was put on acid reflux medication, but that didn’t help. After everything I’d tried, I had to come to terms with the fact that it was a trick of my mind. I had no idea how to stop it.
Something had to change.
Near the end of my Sophomore year, I discovered Freestyle Academy, an alternative academic curriculum for digital arts. This subject matter was foreign to me. The closest thing that I had done to it was 8th grade Photography. Despite all my fears, I needed to take a risk, look towards the future, and search for inspiration to turn my high school experience around.
At Freestyle, inspiration and success didn’t come as easily as I’d hoped. I felt very out of my depth. I was surrounded by exceptionally bright and talented peers, so yet again, I fell into the trap of putting extreme pressure on myself. I came into Freestyle expecting the program to somehow magically better my life, but my grades were at an all-time low. I had hit rock bottom.
As the second semester of the year began, so did the infamous documentary project. The task: film a short documentary on a subject of our choice, write a 10-page essay on that subject, and transform that text into a book, complete with digital illustrations and photography, corresponding with the documentary film. It was the most ambitious project I had ever worked on, and even though I was intimidated, I wanted to finally prove to myself that I belonged at Freestyle.
Despite my social anxiety, I tracked down and conducted professional interviews. I stayed on-track writing my essay, and didn’t panic when my first draft wasn’t ‘perfect’. The week before it ended, I stayed after school for hours, without breaking a sweat, in order to finish the project strong.
By the end, for the first time ever, I had a product that I was genuinely proud of, first to final draft. I was passionate about my goals, I worked hard to reach them, and I learned to confront my anxieties, rather than allow them to derail my success.
Of course, I haven’t defeated all of my troubles. Things go up and down, and I’m trying to focus on the ups and overcome the downs. If I could communicate to my younger self one message after all that has transpired in my life, I would tell him this: Don’t be afraid of Mount Rainier. Scale it.”

For our Perspective Piece, we were to write a short, page-long opinion piece, on anything that interests us.  We then recorded the audio and created a video in Adobe After Effects to correspond with it.  Using After Effects was very difficult at first, but I learned how to string together audio and video to create a nice-looking finished product.  Actually putting one of my core beliefs into words and sharing them with the world was a scary experience, but also very enlightening to me.  I learned more just from sharing my thoughts aloud with people, and really earned a new perspective on life even outside of the content of my video. 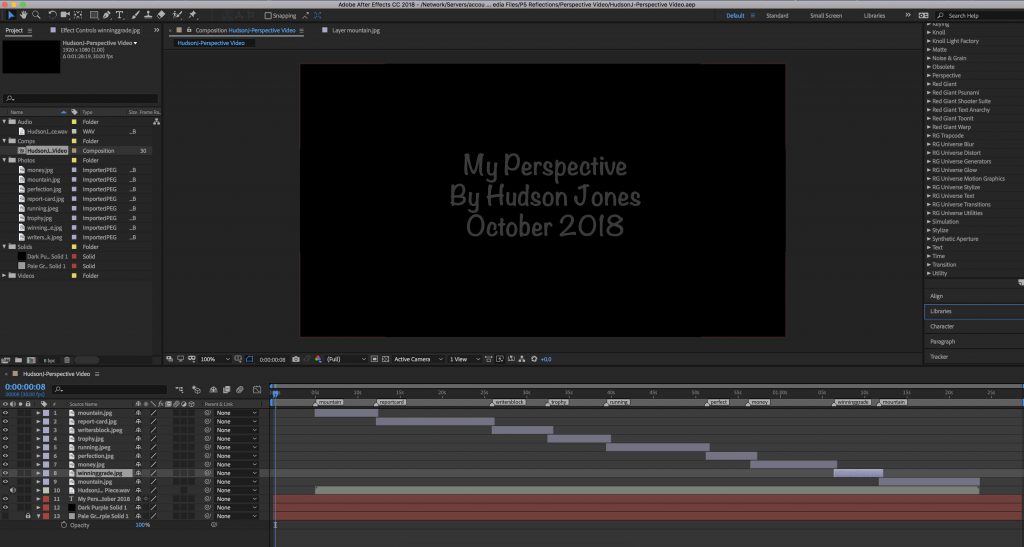