In my movie, it describes a group of friends being washed up on an island by a huge storm. During this movie, these people end up exploring the island, finding a new civilization and species as advanced if not more advanced than the human race. This group of friends finds out that the source of all energy in the island is this blue liquid that comes from the clouds above the island. The movie ends with this group of friends merging both the humans and this other species to where they can both live happily ever after in a new combine civilization.

In my poster, it reveals a silhouette of an island, scattered with blue lines through it as well as on the clouds depicting this energy source the island has. It also has a strange building on it, which is just a glimpse of what the civilization looks like. It also has the title reading “LOST WORLD” in a jungle like font with blue leaves going through each letter, making the font look more tropical. Moving on,  my packaging for the poster will include the same island and different tropical things like leaves and trees. My tickets on the other hand will have the title on them with blue colored leaves going through the ticket. These all relate as not only are they minimalist, but they all have something to do with islands and the tropics. 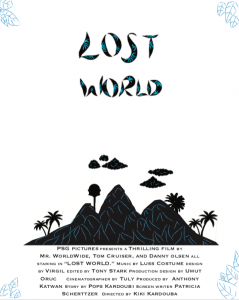 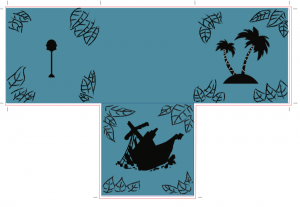