The Conceptual unit was the first project we worked on as juniors. Throughout my three classes, we were encouraged to challenge ourselves with assignments by trying to find new perspectives and different metaphors to convey a message.

In this unit, we were taught the basic of how to use modern professional equipment and applications such as DSLR Cameras, Tascam Audio Recorders, Adobe Photoshop, Adobe Premiere Pro, Adobe After Effects, and WordPress.

For our first assignment in English, we came up with concept statements by drawing an emotion and an action out of a bag. We then got to write a haiku that accurately expressed the statement through metaphors and chose a picture that matched. Later, in Digital Media, we recorded our haikus and used Adobe Premiere Pro to make the final product into a video format.

My concept statement was “I am exploring the feeling of reluctance, through the experience of the desire to rebel”.

the chaos of muffled chants

echo in the heat 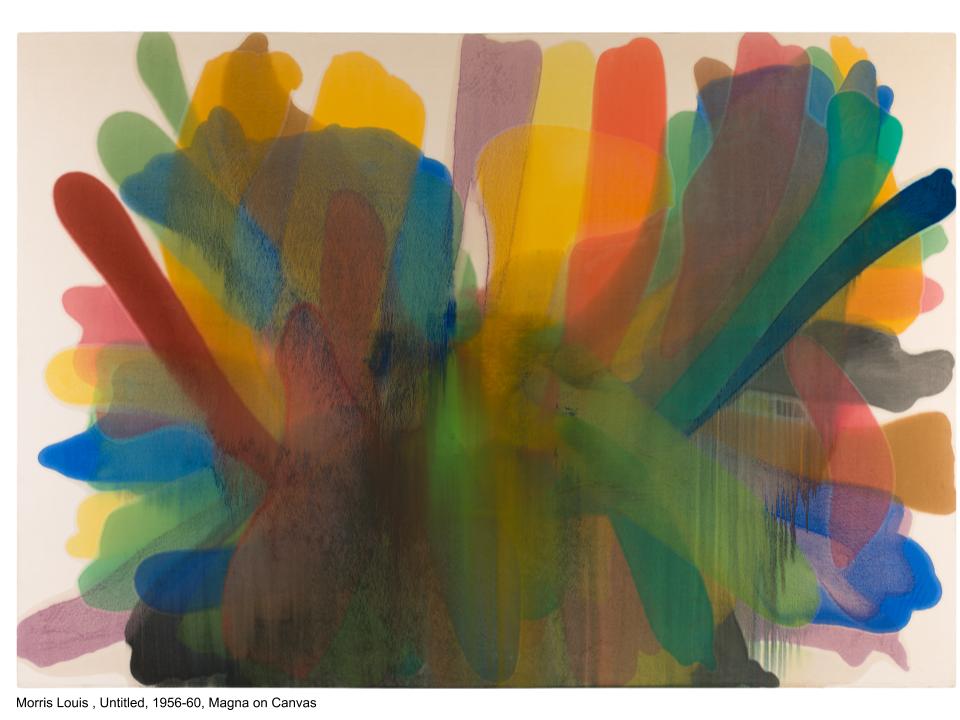 reaching out towards the edges,

smothering the white void behind,

with complete disregard to how they melt

The final product abstracts from the process;

ambitions blurring under the tension

of limitations set by deadlines.

How can you see such conflict

and turn your back?

A tradition that will carry on for years.

The movement of a pink field

Their cries are projected,

to ears hidden under cushioned covers.

leaving you as solid as syrup;

unable to break through the humid haze

and join the roar.

In “01 21 17” I am exploring the feeling of reluctance through the experience of the desire to rebel. I am the intended narrator in the poem. The voice is responding to the concept statement statement by talking about the regret I feel for not being able to go to the women’s march 2 years ago because I was sick that day. The attitude in the poem starts out with a disapproving tone showing the annoyance that the speaker feels towards what is going on around them and changes into a tired, regretful tone in the second half because the speaker wishes that they could show their support but cannot. The poem is in free verse form. While writing, I mainly focused on poetic devices such as symbolism to suggest that the speaker was sick and could not function properly, “Their cries are projected,’…’unable to break through the humid haze”, imagery to show the contrast between the crowded marches and the empty room, “The movement of a pink field bounces across stations, as soft light reflects off grey walls.” and “to ears hidden under cushioned covers.’…, and also some assonance to put emphasis on some phrases like ‘cushioned covers’, ‘as solid as syrup’ and ‘humid haze’. Some other devices that I used were allusions to the women’s march in the title, ‘01 21 17’, and throughout the poem, ‘The movement of a pink field’, similes, “leaving you as solid as syrup;”, and a few onomatopoeias like ‘roar’ or ‘cries’.

In our English class, we split into 2 groups to write a poem for our first group project. An exquisite corpse poem is a collaborative piece wherein multiple people each write a line that goes along with the line written before it, the top line is then folded over so that only the last line written is visible. 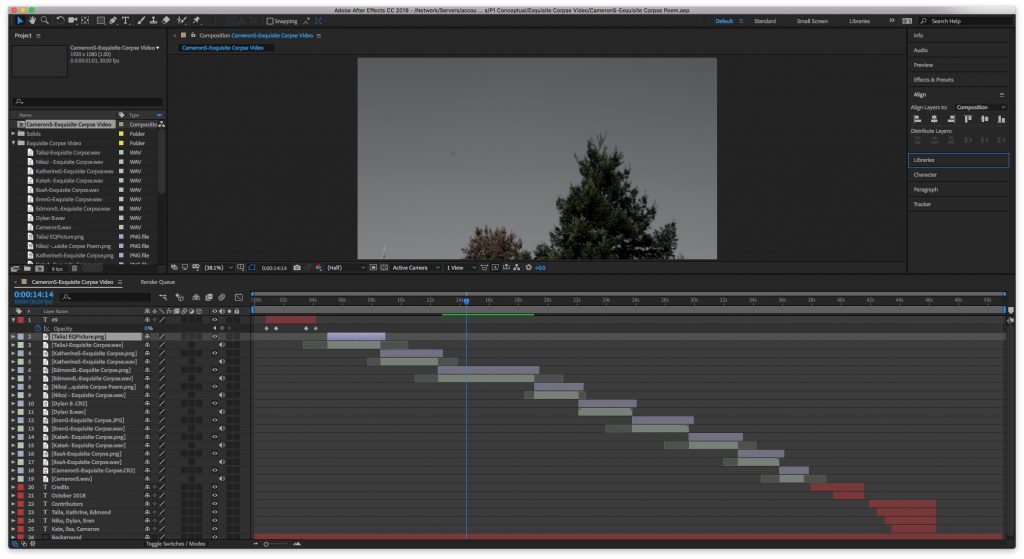 Jagged cliffs reach for the horizon

The raindrop gushes from the belly of the sky

A belly as big as Peter Griffin.

The bigger they are, the harder they fall

the more you have, the more there is to lose

the less you own, the more you crave.

In early September, everyone in the design class received a macro lens to use on our DSLR cameras.

We used Adobe Photoshop CC 2018 to edit our final photos by cropping, adjusting saturation and contrast, and adding filters to enhance certain elements of our photos and apply our knowledge of the Principles of Design. 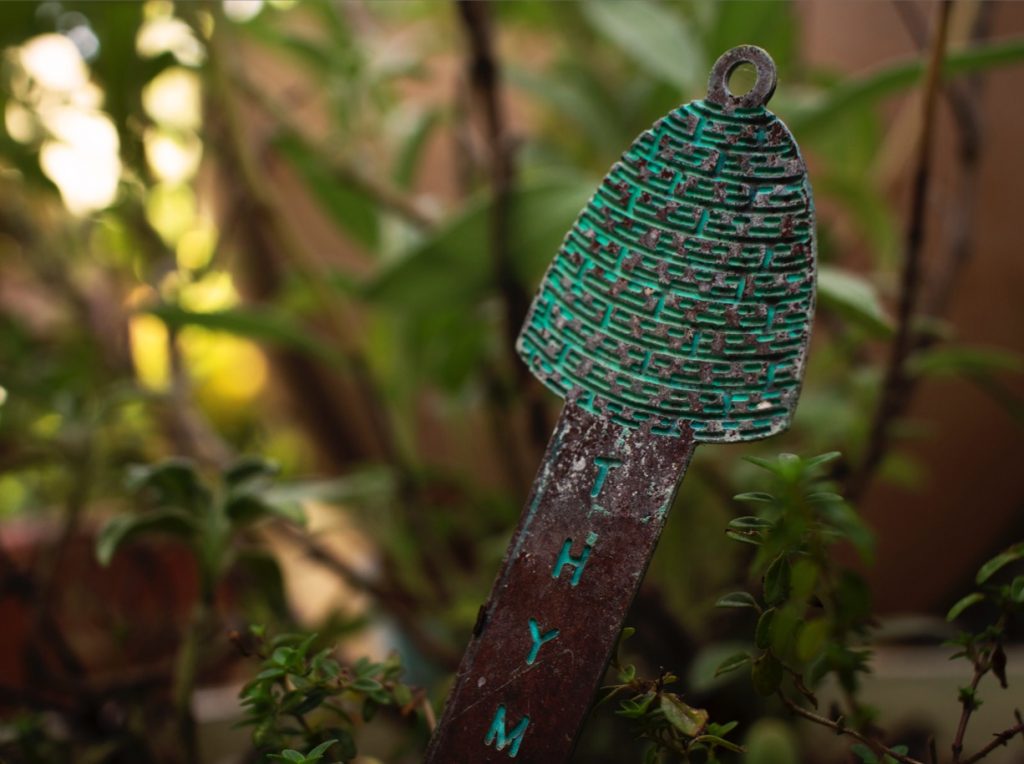 Using the concept statements that we were given in English, we were tasked with coming up with 2 objects that represented the emotion and action in the statement. 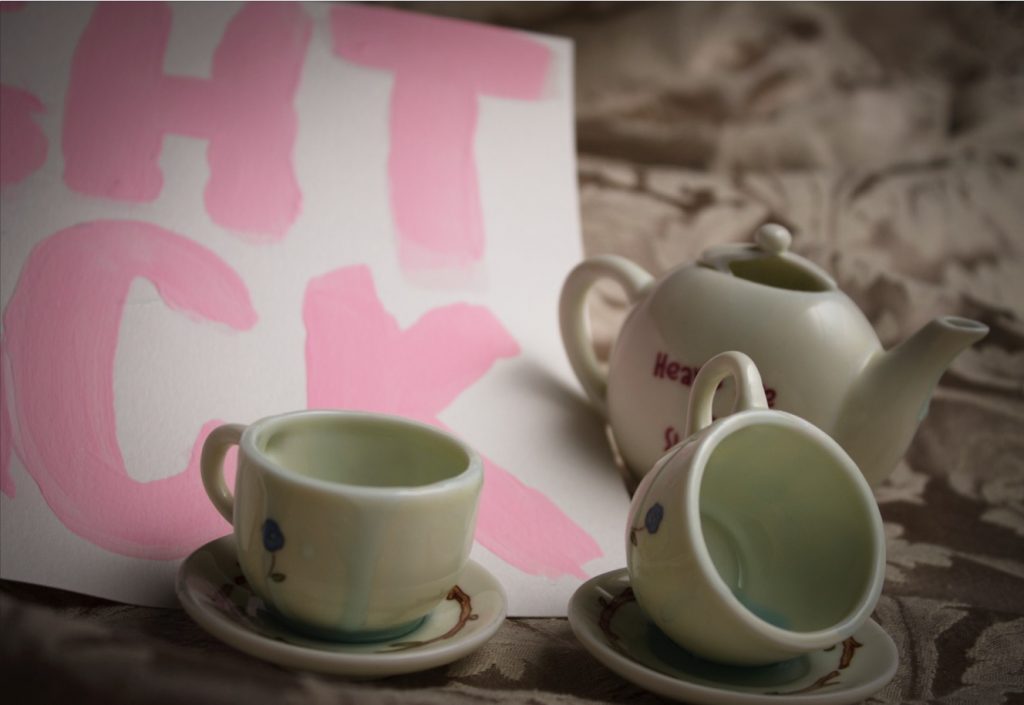 I am exploring the feeling of reluctance through the experience of the desire to rebel.

The objects pictured are a small tea set with broken pieces and a protest sign. The sign is positioned behind the tea set, partially out of frame, so as to not draw the viewer’s attention immediately. The objects were photographed surrounded by muted colors, in low light, with the speedlight pointing away, to create a soft tone.

The tea set and dish soap represents a person’s reluctance to do simple, expected tasks, such as washing dishes. The sign represents wanting to protest current events but feeling reluctant to stand out. Protest signs are commonly written in red because it is an intense color that evokes strong emotions. This sign is painted in light pink acrylics to show a hesitation to do so. Another aspect that shows reluctance is the vague message written on the sign: “FIGHT BACK”.

I learned multiple techniques while editing my photo. I cropped the photo using the rule of thirds, added adjustment layers for brightness/contrast and worked with hue/saturation. I learned to use Photoshop to select objects, save selections, and spot heal the image to remove small hairs and other specks on the objects. I also discovered that by using a vignette, I was able to bring attention to the center of the photo rather than the outer edges.

I began editing my photo by cropping out part of the background to tighten the focus the objects. To bring further emphasis to the objects, I edited the sign by selecting the letters, adding a filter, and increasing saturation to make the words stand out against the paper. I also increased contrast across the entire photo to allow the tea cups to stand out more. Through these edits, the photo has a more precise focal point.