To begin the year in English class, we were tasked with reflecting on our own lives and looking within to answer the question, “who am I?”. This was done in the context of college essay writing, so we were reflecting on challenges we’ve faced and what we’ve done to overcome them. A challenging and emotional project, we had to express our internal strife in under 650 words. What I learned from the assignment was really that I don’t know who I am, and that I’m unsure of what I want to be. This is a rewarding piece of knowledge, and now motivate me to involve myself in expanding my activities, and improving on my skills. Due to the personal nature of the essay, I recorded a different piece in digital media (linked below) which is a persuasive speech about technology use.

The new iPhone X came out recently, and I found myself immediately viewing my perfectly capable iPhone 6 in a new light. It now looks clunky and old fashioned, a mediocre and slow device. “Say hello to the future”, says the Apple website and various billboards heralding the phone’s arrival to the market. My phone, barely three years old, now feels like an artifact, and I find myself considering $999.99 to be a reasonable and necessary price for a new phone, despite it being out of most people’s budgets including my own.

We may be technically aware that we are being manipulated. We all know that advertisements are meant to make a product look appealing, and superior to the same product from another brand. In addition to this, we know that beyond food, water and shelter we need little else. But as a society we continue to buy singing plastic fish. We watch the Superbowl to see the elaborate high-budget advertisements that make us laugh, cringe, or want to buy a car. We are in a constant battle within our minds between knowing that materialism will never grant satisfaction and may in fact be harmful, and wanting the temporary high that advertising promises by giving us a desire and filling it.

This internal struggle is prophesied in George Orwell’s 1984, in which he writes, “To know and not to know, to be conscious of complete truthfulness while telling carefully constructed lies, to hold simultaneously two opinions which cancelled out, knowing them to be contradictory and believing in both of them…. Even to understand the word ‘doublethink’ involved the use of doublethink” (Orwell 35). The word doublethink in the dystopian world of 1984 is at its core another word for irony, which is what we experience on a daily basis as American consumers. We buy into an emotionally oppressive system of eternal expenditure while encouraging ourselves that we are making individualistic decisions and rising above the rest, all the while consciously being herded like sheep to form a collective standard of opinion which can be marketed to on a larger, more convenient scale. We exercise “doublethink” every day when confronted with the temptation to buy junk food which to our knowledge is harmful to our health, or when we buy a bottle of water which we know will hurt our planet. Yet we buy into it, because it’s easy to be told what to want.

One psychological trick used in a recent McDonald’s advertisement was to never say or display the name “McDonald’s”, merely hinting at the brand by dressing the spokeswoman, Mindy Kaling, in a Mcdonald’s yellow dress and placing her in front of a red backdrop. Kaling urges the viewer to, “Google ‘that place where coke tastes so good’”(Maheshwari). She then waits for a few seconds while the viewer, ideally, follows the command. This allows McDonald’s to capitalise on the curiosity of millions of individuals who want to understand the ad and then inadvertently support it and commit it to memory in doing so. The technique generates a positive association with McDonald’s while making the viewer feel like they are being included in something exclusive and are also discovering something new. If the viewer were to already associate “that place where coke tastes so good” with McDonald’s and abstain from googling it, the company would have already achieved the advertisements goal and have gotten into that person’s head.

Arguably the most common deception used in marketing is “charm pricing” which involves lowering an items price by a cent or dollar so that it’s first number decreases by one, such as the difference between $3.00 and $2.99. A study conducted by the University of Chicago and MIT found that when presented with the same clothing priced at $34, $39, and $40, the majority of people bought the $39 clothing, despite it not being the cheapest option (Boachie). This is something that I find myself falling for every day, choosing an item that costs $4.99 over one that costs $5.34, a relatively meager price differential. Although this tactic may not be particularly harmful to us, it is another example of the subtleties of advertising which are constantly manipulating our thoughts and perceptions to get us to buy.

The basic function of an ad is to find the consumer’s need and fill it with a product or service. Yet a given company has a wider market and likelihood of generating revenue if they create the need, create the product, and fill the need that was never naturally there with a product that is not a necessity. Our entire system of commerce is dependent on successful advertising due to our sophisticated and high production of goods, making it highly competitive and difficult for a company to stand out or offer anything new. Therefore one may say that advertising is positive and even a practicality because it offers opportunity and success and increases jobs and ability to acquire recognition, but then the question remains to be asked, why do we need money? Why would we need to make more than enough to survive? Largely, it is because we want to buy products and services that are marketed to us, and to achieve happiness through material consumption, because this is what we are told will make us happy.

In writing this speech I had to use some doublethink myself, because who am I to speak in criticism of a system I am so deeply a part of? I buy Starbucks when I have coffee at home. I want a new iPhone when mine still works. But I am simultaneously aware that the things that make me happy and fulfilled cannot be bought, and my wish is to overcome the pressure to consume and enjoy everything that I have, which is what I hope the rest of the world can learn to do too.

In Digital Media, we were asked to write a ‘rant’, or opinion piece about something we were upset or passionate about. This could be anything, and after we had written the piece we then recorded it in Pro Tools, similar to a podcast. I chose to write about boredom, because I live somewhere that has a lot of options of things to do and a lot of culture/community, but I still see a lot of people bored and depressed, feeling like they can’t do anything they want to do, including myself–and I want to change this mindset. I realized that a big part of how I conduct my life is in trying to escape boredom and unproductivity. After recording the piece on Pro Tools, I created a corresponding photo montage in After Effects using keying and text tools to transition the media aspects so that the audio was accompanied with a slideshow.

My After Effects dashboard: 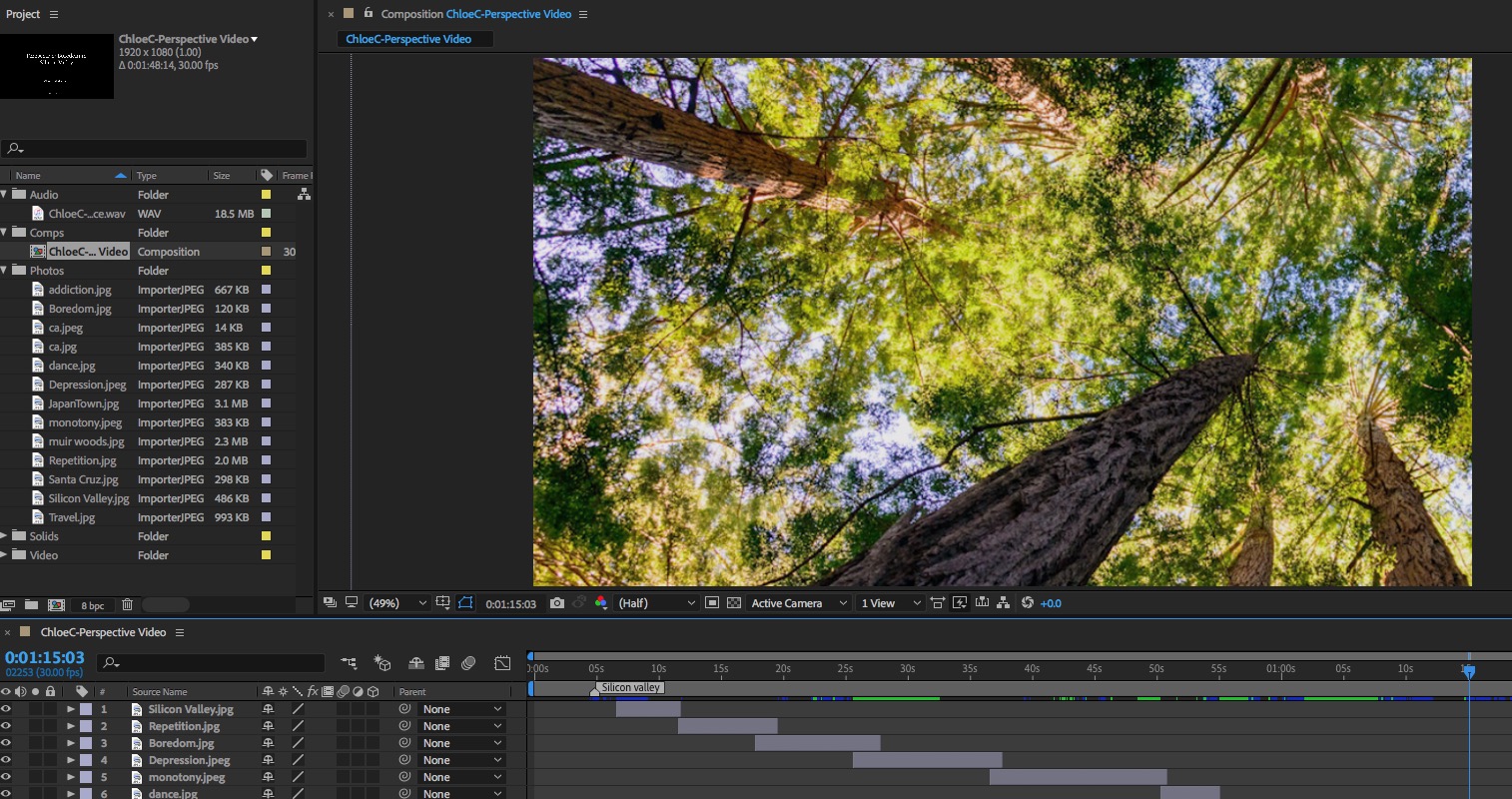 In my Design elective class, we have been working with surrealism, painting, collage, and digital art to learn the elements of design. The goal in these projects is to learn the fundamentals of design, including shpae, space, line form, value, and more. We began with an Aboriginal painting project in the style of Australian native artwork, where we were required to paint a large silhouette of an animal, choose a color scheme, and fill the white space and negative space with dots of varying sizes, in the style originating from the Aboriginal people of Australia. I really enjoyed this project because it allowed me to incorporate a lot of detail and precision in the dot work, and we were also tasked with mixing our own colors which was a challenging introduction to color theory.

Our second project was to create a collage with images from magazines. This was in relation to the principles of value and shape, and the contrast between object sizes. Mine took on a western theme, with an orange/pink color scheme. The goal of this project was to learn about form and scale, and to create a surrealist piece by placing images in unexpected places with interesting juxtapositions of size. We then used this collage to create a monochromatic painting that shows only the silhouetted shapes visible in the collage and excludes details. 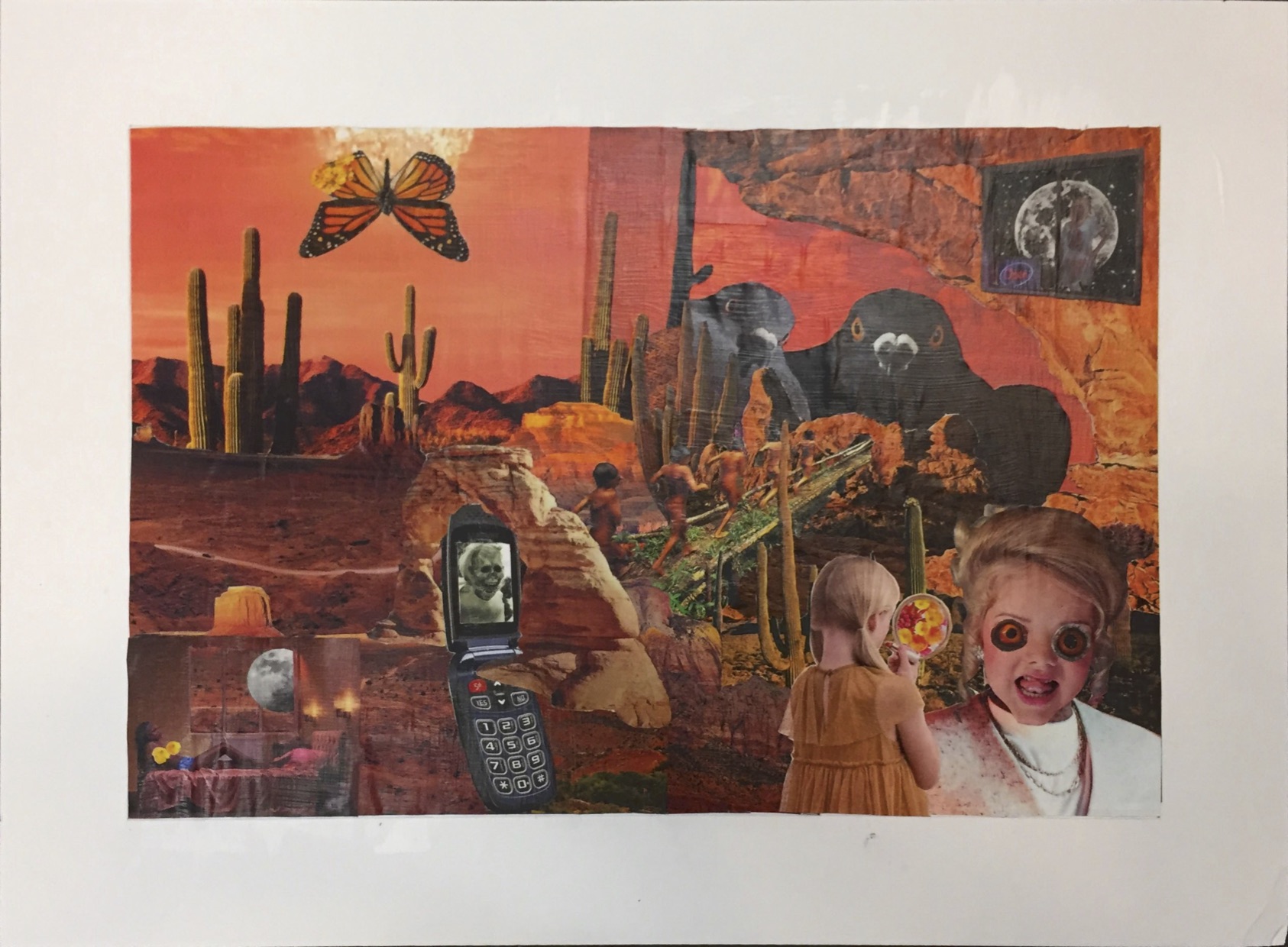 These were some of my favorite projects thus far at Freestyle, because I appreciated the opportunity to use physical mediums and create artwork with my hands, allowing me to more fully express my vision without the limitations implaced by lack of understanding of complex technology. Fitting together the pieces of the collage gave me an appreciation for color scheme and surrealism, being a free and restricted project at the same time.