For our narrative film, the logline is three teenagers make an elaborate scheme to attempt to win the biggest prize in an arcade. There are three boys, the main character is Michael and he is pretty nerdy considering he spends all of his free time in an arcade. Michael is best at figuring out situations and coming up with a plan and organizing. The other boy named Jimmy is also pretty nerdy however he is best at going through with a plan and carrying it out and good at scheming, he’s the funny one in the group. The other boy is named Charlie and he is also a little nerdy but he has everything all the time so if you need anything Charlie has it. The opening scene is in the arcade and Michael is counting his tickets and he finally has enough for the biggest prize. Him and his two friends jump up and down and eagerly rush over to the arcade line to have the worker count their tickets so they could finally get the bike they wanted. They walked up to the counter and Michael saw the girl he had the biggest crush on, Molly. She was another worker and she was standing next to Billy, the worker who counts the tickets and hounded out the prizes. Billy counted the tickets they needed 3,000 and he was counting up to 3,000 and then ripped them up in front of them saying oh guess you don’t have enough tickets! The three boys were instantly angered going off at the workers which gets them banned from the arcade and Michael was embarrassed in front of Molly. The boys went home and created a plan to steal the bicycle. Days later after creating this huge elaborate plan to steal the bike, they began the plan. Jimmy enters the building and sets up little cameras all around the room so that the other boys could watch from outside and make sure they don’t get caught. The cameras are in place and Michael and Charlie are watching on their computer outside and they have their walkie talkies and see that Billy is coming towards Jimmy and he rushes under an arcade game. Jimmy is stuck under the game so Charlie had to go create a diversion so that they would be able and get Jimmy out of there. Charlie sets off a bunch of arcade games to occupy the workers. As the workers were occupied, both of them ran out of there. They create a plan outside of the arcade and afterwards Charlie goes back in and he has to create another diversion so he breaks the ticket machine and tickets come flying out of the machine and while Billy was trying to stop the machine, jimmy slips back in and takes the key off of billy’s hip so that they would be able to get to the bike. This fails as he was trying to open up the bike jimmy realized it was the wrong key so at this point Michael informed jimmy that Billy was coming towards him and jimmy climbed under the counter and his view was of Billy’s feet. Eventually Jimmy sneakily grabbed the right key off of Billy’s hip, he unlocked the bike and Charlie was able to carry it out of the box. However, Billy spotted both of them and they were freaking out because he was saying I’ve got you now. Then a loud siren goes off and everyone starts running out of the arcade and Jimmy and charlie look over to see Michael with his hands on the fire alarm. They all triumphantly run out of the arcade with the bike. Days later, Michael heads back to the arcade and Molly and Billy are on their breaks and Billy is furious seeing Michael with the bike, but he could not touch him because he was not on the property and Billy wasn’t allowed to leave his job. Molly sees Michael on the bike and she hops on the handlebars and they ride off together into the sunset. 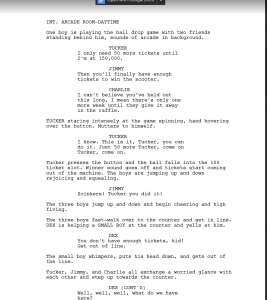 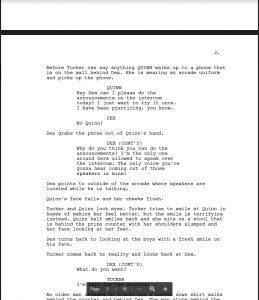 Our script ended up being one of the longest scripts this year being 18 pages, and we wrote and re-wrote the script probably about 5 times and we were the last group to begin filming because we took so long to write the script to make it perfect. 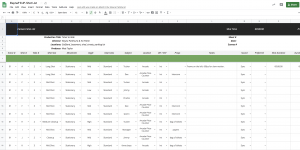 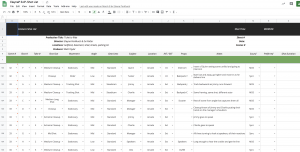 For our shot list, we had a total of 34 different shots even though we ended up taking a lot more than that. Here we wrote how many takes we did, what scene it was, the type of shot, props, location, and everything else you need to know to neatly plan out each and every shot.

Searching is in progress