This is the question we had to answer in the Reflections unit. We were required to reflect on our life experiences and inner self and produce works based on these observations. In our English class, we wrote a personal essay that was supposed to be our personal statement for colleges. In our Digital Media class, we created a Perspective piece on a topic we were passionate about. Finally, in our animation class, we modeled an object in Maya that represented us.

I didn’t really learn much about myself as much as I was reminded about who I was as a person. I’m not going to directly tell you who I am in this paragraph because I think the art can speak for itself, but I will tell you that this project provided me with a lot of closure. For my whole high school career, I struggled with self identity and didn’t really know who I was. But after this unit, I think I have a firmer grasp of my character, and that provides me with a lot of confidence (just kidding– a little confidence because I have confidence issues) for the future.

Oof. This one was a hard one to write. The thing is, I’m really good at honestly expressing my feelings and, but when it comes to actually getting down explicitly expressing who I am, I don’t know where to start. If you were to actually ask me who I was, I would reply with the classic “trash”, but I wouldn’t be able to elaborate on that. If I were to really think about, I would only be able to brainstorm negative aspects of myself– nothing of merit. On one hand, I think it’s good to be able to admit your faults, but if you can’t even find one good thing about yourself, especially when trying to sell yourself to college admissions officers, it’s only detrimental.

So, I got to intense brainstorming. I listed down all of the trauma I’ve been through in hopes of exploiting it for personal gain. And hey, it worked! Yes, it was really hard to watch others read my essays but that’s just part of the process of accepting your scars. The nice part is is that I was able to find some closure with myself by writing this essay, and I was actually able to find some merit in my existence. If a piece of writing had to define my whole high school experience, this essay would be it.

When I learned about the new Animation class at Freestyle Academy, a multimedia arts program, I almost immediately signed up for it. I was initially hesitant due to inexperience, but I applied anyways for art’s sake. Animation eventually became a passion, because I enjoyed utilizing it as a storytelling tool and appreciated the careful consideration needed for every shot. However, it also became a source of self-sabotage. When I looked at my peers’ animations, I saw exquisite masterpieces. When I looked at my own, I saw a steaming pile of garbage.
This unhealthy habit of ranking and comparing myself to others began at the start of my freshman year, which prohibited me from pursuing academic and social opportunities because I believed I wasn’t capable. The only door it opened was depression, for I felt my efforts were futile. I tried opening up about my issues and desperately used tidbits of validation to build myself up, but I couldn’t control the inner voice that constantly tore me down. During the February of my junior year, an opportunity to escape the trench I was stuck in revealed itself.
Surprisingly, out of many contenders, my narrative animation was chosen for the mid-year exhibition screening at the Computer History Museum. As I watched my story unfold before the dimly lit faces of peers and strangers, my body shrunk into my seat for fear of disapproval. But before I disappeared into the darkness of the exhibition hall, the applause flooded me with light, swelling me with pride. Finally, my in-class breakdowns and anxiety attacks weren’t all for naught.
However, as the films continued to play, my admiration for my peers buried my pride. I completely disregarded my film’s praise and instead focused on how others achieved the things I couldn’t. My pride was passing, and my film was forgettable.
Fortunately, the Junior documentary project eventually interrupted my moping. The objective was simple: tell a story from the community. The process, however, was a lot more complicated than that. Within four months, I animated a three-minute documentary on teenage depression, interviewed five experts of the field, and designed a book that included my research paper on the topic and original photography––all while learning to love myself.
When you become aware of your aching hands and blurry vision from staring at a screen for five hours straight, you’re reminded to pause and reflect. Looking at my essay’s eighteenth page, I remembered overcoming the anxiety of reaching out to strangers, synthesizing about thirty-seven resources, and struggling with sounding smart in my paper. Watching my animation, I recalled the muscles I pulled stretching my imagination, the hours animating a mere five seconds, and the frustration of trying to save my audio from sounding like a dying goat in a woodchipper.
By the end of such contemplation, I couldn’t help but be in awe of my accomplishments in light of these challenges. I felt fulfilled after creating something both meaningful to me and my community, my purpose slowly materializing. Because I started recognizing my own merit, I began treating myself more kindly, the words, “you are a person worthy of love”, ringing in my head.
Yet, even after this paradigm shift, I know my negative thinking still needs to be constantly managed. Much like animating, mental health is a grueling, time-consuming process that requires close attention to detail. A quality product can’t be produced in a day, a week, or even a month. If I don’t deal with the bugs as they come, the process will become increasingly difficult to handle and could end up rotting the fruit. Halfway through, things may get overwhelming and will compel me to give up, but the prospects of an amazing creation ultimately provides me with the motivation to trudge on.
Sure, maybe I don’t have the best technical skills or artistic abilities.
But I sure as hell have a lot of patience.

Here is my first draft of the essay in audio form:

For this assignment, we were required to record our perspective on any topic of our choosing. While the essay explored the dark parts of me, this perspective piece showcases what I’m outwardly like, the humorous parts of me. I kind of wish I did something more meaningful, but I needed a break from the doom and gloom of my essay. Thus, I present to you the thing that usually gets me out of my depressive states: irony.


I spent way too much time on the editing; it honestly set me back a day or two for my other classes. But it was worth it, because I had a lot of fun editing it. I personally think the intricate editing makes up for my subpar perspective. Yes, what I’m saying isn’t revolutionary, but at least it’s fun to watch. 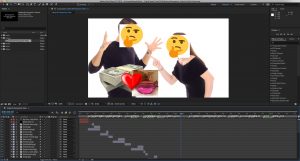 First Animation project of the year! I don’t think there’s much explaining to do; it’s really just an illustration of my name. It was really fun for me though, since we were essentially allowed to do whatever we wanted with it as long as it described some aspect of ourselves. This illustration demonstrates my love for autumn and my tendency for introspection, as demonstrated by the lonely swing and mellow, blue sky.

For this project, while I initially sketched out ideas by hand, I primarily used photoshop to render the final design. Ah Photoshop, what a kind friend you have been to me. This is actually my first time grayscaling–meaning, you illustrate the image with blacks, whites and grays and then overlay it with color in the end. Grayscaling is helpful because it helps you establish value. Plus, it’s a lot easier to mix colors with overlays other than solid colors. 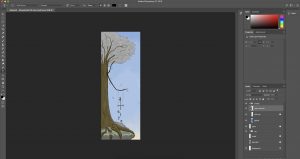 Photoshop Interface – in the color overlaying part of grayscaling

We created a Google Doodle gif based on a national event that happened on our birthday. My birthday is on February 20th, so I decided to base my gif on the first annual Pancake Race. I was going to do something about space, but pancakes are a lot more fun to work with (sorry, space).

I created the gif solely with Adobe Animate, a trustworthy friend of mine. After volunteering as a Digital Animation aid at CSMA, I developed a newfound appreciation for the animation principles. Watching the little kids completely disregard these principles frustrated me and in turn, forced me to realize how important they were in creating a quality product. So, for this animation, I actually tried incorporating these principles. 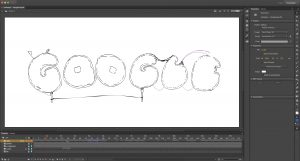 Despite having to make sacrifices in the animation quality due to time constraint, I’m overall proud of the animations I’ve made because they honestly look really good. I’m genuinely surprised that the Google Doodle was created with the limited brushes Animate has. If I had more time for this project, then I would definitely continue working on it.

AHHHHHHH I *strongly dislike* THIS PROGRAM IT’S SO FRUSTRATING. Yes, modeling objects can be quite relaxing when the program is actually working, but when Maya decides to crash or distort your object in unimaginable ways, you can’t help but scream.

For my animation class, we were required to model and texture an object that is essential to understanding us. They could be real objects from our childhood or completely made up–as long as it described us. Even though I was aware of how difficult it was to learn the Maya interface, I decided to model something complex for my first Maya project: a rib cage pocket watch. 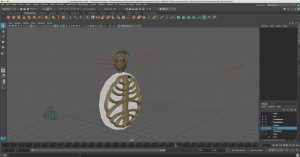 Modeling and lighting in Maya

Yes, you heard me, a rib cage. I’m aware that I’m pretty reckless for wanting to do something so complicated as my first 3D model, but I was just so enamored by the prospects of the final result. Just imagine how cool that would look! 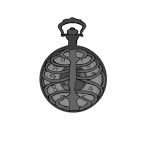 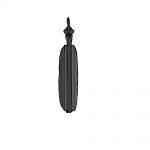 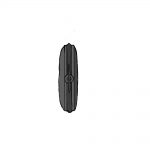 Surprisingly enough, building the rib cage didn’t end up being the hardest part– it was the texturing. Let me clarify, it wasn’t the actual drawing on the object, it was creating the UV planes so that the textures would be applied correctly. Because the rest of the model ended up being janky (all thanks to me sometimes accidentally deleting faces and modifying vertices), it was extremely hard to UV correctly and efficiently. The program would decide to cut the UV shells oddly, and sometimes, the UV shells would overlap. I probably exported around 6 UV maps before I finally got it right…

But alas, the deed’s been done. I finished it.


Did it turn out the way I wanted it too? No. But did it end up being the best it could’ve been given my busy schedule and constant struggle with the application? Absolutely. Don’t get me wrong, I still think this pocket watch ended up looking nice, but I know that it could definitely be better. Hopefully, I’ll be able to take the things I’ve learned from this hellish experience and apply it to future projects to prevent any more complications from happening…