This has been a very time consuming, difficult project but it has been very fun. My project has changed a lot over time. I have been working with Nisha Malley on this project, and we initially went with her original idea for our film. Here is the synopsis of our original plot:

The CEO of a company that makes pipes for the county learns that the current city mayor named Leo Barry is leading an investigation into his company. The CEO is upset about corruption and bad things happening on his watch, but his executive board shrugs off his complaints and tell him to go talk to the mayor to try to stop the investigation. The CEO goes to talk to the mayor, who has just finished a debate against a young candidate named Ana. The CEO realizes that the Mayor will probably be elected again, the investigation is going to continue, and he will lose his job and his company will be shut down. He talks to Ana and tells her that if she wants to win, she has to make some changes to her campaign. Ana is desperate for advice and asks the CEO to help her with her campaign. The CEO says no because he has a company to run. Ana asks him again, and he realizes that if she is elected, she can stop the investigation. He agrees. Ana and the CEO go to gather support to Ana’s campaign. They go canvassing, get ready for debates, and meeting constituents. Ana and him are friends! Then, Ana learns about the investigation into the CEO’s company. She is super upset and doesn’t want to work with him anymore. The CEO realizes he needs to take responsibility, so he holds a press conference where he explains that his company will cooperate with the investigation. He apologizes for everything he’s done. He becomes a better person! Ana forgives him, and the two of them prep for the final debate. Ana wins the debate, and then the election! The CEO resigns his job, and he decides to resign and help Ana when she is the mayor. They are best friends again and Ana is an excellent mayor.

It ended up being extremely long, boring, and complicated. We decided to scrap that and go with a new idea. Now, our story was about a twelve year old named Ana who doesn’t want to move, so she teams up with her brother to scare potential buyers off. Here is the first page, which is about the first minute of our film: 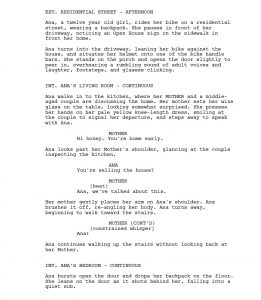 As we continued working, we developed a shot list. This is a list of every shot we would need, what kind of shot it would be, and what we would need to film it. Here is a screenshot of part of ours:

Finally, here is the trailer I made of our movie. It isn’t as good as our finished film, but I worked hard on it.