The reflections unit was centered around the question “Who am I?” In order to answer this question, we explored methods of personal writing in English, which we used to write a personal essay. In Digital Media, we used Adobe After Effects to create an opinion piece, with images and audio. In Design, we made a collage, with a color scheme of our choice. I valued the chance to explore my own style of writing and self expression throughout this unit, as well as explore the art of personal expression as a whole.

To prepare for the personal essay, we did several brainstorming activities in English, to explore ourselves, and find material for our final essay. My essay tells a story about my personal evolution, and how the steampunk community affected it. It answers the question “Who am I?” by showing how I came to be what I am, and what exactly that is.

“Torso trap” was a term I coined after I had formed a contentious relationship with my first corset. I had always believed that only brave, skilled, spirited characters, who were in some way “worthy,” ever fell down rabbit holes, or stumbled into wardrobes. However, though I would hardly be a worthy side character, anxious awkward thirteen year old me had been beckoned by two faceless piratical sirens (they were actually mannequins) into a store which would serve as my first introduction to the world of Steampunk. The style expressed humor and elegance; it paid homage to the past while professing hope for the future. I was so excited to explore every shelf and cabinet. I quickly found a coat, hat, goggles and corset which fit well and looked amazing. However, as I discovered later, the bones in my corset delivered no shape, only lung crushing agony. I almost never wore my first and favorite corset as a result. In spite of my unruly corset, I continued to explore this little personal adventure that had been thrown my way, slowly wriggling out of self-censorship and into tentative self-expression.

My fellow steampunks were these peculiarly magic little Domovois, who had installed such a warm and welcoming community within the underbelly of mainstream nerd culture. I loved to see them darting around the corners of the Dickens fair and bantering at conventions. Stories, performing arts, music, humor, and a general feeling of affability defined the culture. While watching performances at Steampunk conventions, it was not uncommon to hear the audience erupt into a chorus of tweets and whistles throughout the show. They would invite anyone to race teapots, whether they were a cruiser or a loser. Vendors would invite anyone into a conversation, whether they seemed interested in buying or not. Everyone from blue aliens to crossdressers were welcome in the little bronze encrusted bubble of comradery. I admired each of them for the vibrance they exuded, and they inspired and fostered my own self-expression. I began to wonder, if they could accept me, why  couldn’t I accept myself? I felt comfortable asking about boneless corsets, and a wise burlesque goddess advised that I could dismantle the torso trap with a seam ripper.

In addition to community, there was art. Of course there were ornate costumes and performances. What I appreciated more, however, was the art of presentation. Something as simple as tea and cookies became an unforgettable experience, because it was served by Deadpool. A hotel lobby did not need a complete steampunk remodeling, if a few paintings of airships were plastered in a few crucial spots. It was an art where the medium were the little emotional triggers, which were woven into an experience tapestry. To me, it was real world wizardry.

I wanted my friends to experience the enchantment as well. However, this only led to fair fiascos and convention tension. They didn’t see the magic I did, which was disheartening to me, because it was such a large part of my life and self expression. I reasoned that if I wanted people to have a magical experience, I could bring it to them, instead of trying to bring them to it, through the art of presentation. That is why I want to go into hospitality. I want to weave together a world that seems magical and fun to someone else, where people feel they can express themselves and be accepted. I don’t just want the experience to be a tapestry; I want it to be a warm blanket.

I sometimes struggle to strike a balance between self-expression and the feelings and desires of others, but I believe that if I have the skills and the spirit to dismantle the torso trap and do what the steampunk community did for me for someone else in the future, then I am a “worthy” protagonist.

For the perspective piece, we had to write a rant style opinion piece, about a subject of our choosing. I chose the bond between human and animals, because it bothers me that not all animals have the ability to understand friendly relationships. We then recorded ourselves reading the piece, and edited it together with images and text in Adobe After Effects.


Here is a screenshot of my work in Adobe After Effects. 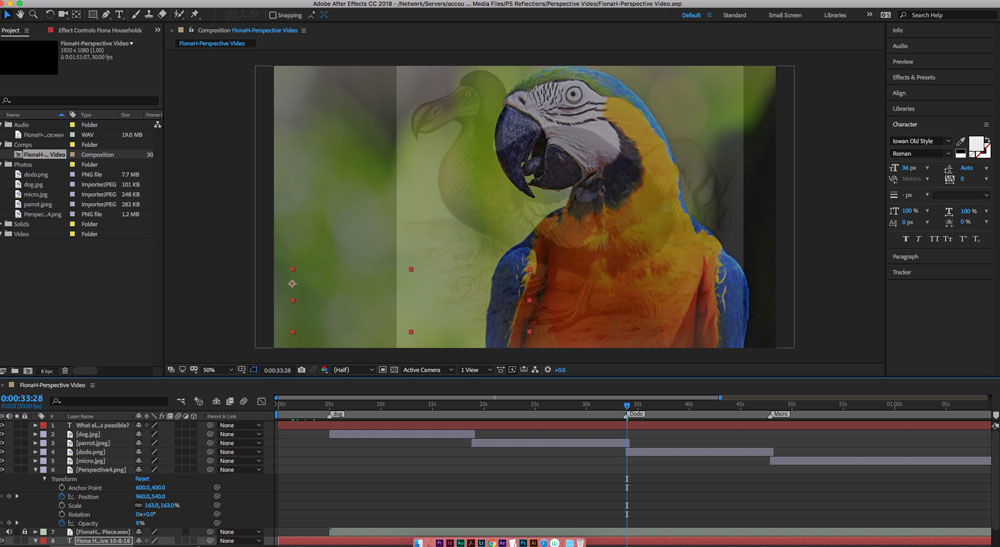 In design, we made a collage using magazine cutouts. Afterwards, we traced the outlines of our various objects, and painted them using a monochromatic color scheme. Meaning, we could only use one hue, a pure color with no white or black, and tints, a hue plus white, tones, a hue plus gray and shades, a hue plus black, of our base hue to color in the silhouette. This project was meant to teach us about shapes, and I found it to be an interesting exercise. 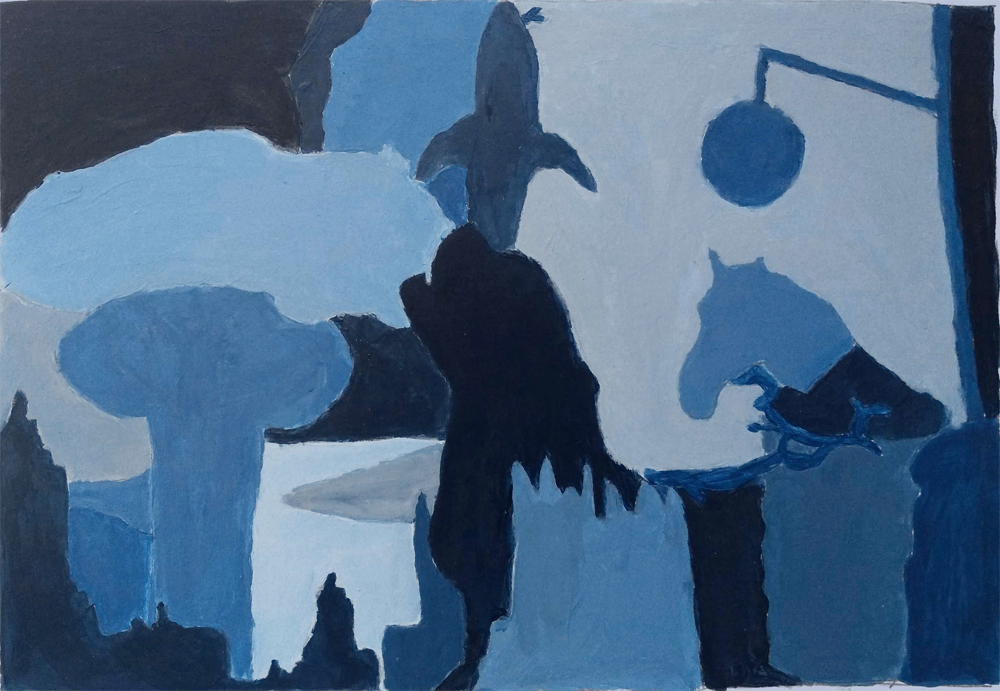