“What have you accomplished? How have you grown? How did you grow into the digital artist you are today?”

Hello! My name is Kaitlyn Ecklund, and I’m a Design student at Freestyle Academy. Over the last two years, I’ve learned so much from my classes and have grown tremendously as an artist. I particularly enjoy photography, painting, and graphic design work. Outside of my Freestyle work, I enjoy reading, running, watching movies and hanging out with my friends.

For my Senior Showcase, I am excited to share my Junior Documentary and Senior Zenith projects with you. I feel that these pieces reflect my best work and are the most meaningful projects that I’ve created here at Freestyle. For my Documentary book, my subject was my grandfather who contracted bulbar polio when he was in college. The book outlines his struggle with the illness, how it has affected his life and how it has shaped him. We were supposed to connect our documentary subject to a current day issue so I connected it to the anti-vaccine movement. I learned how to compile a documentary and to focus on the most important parts and string it all together in an accurate but intriguing narrative that makes the reader want to learn more. For my Zenith, I wrote a documentary book about a Liberian refugee who was later adopted and brought here to Silicon Valley. However, in order to push myself, I wrote it in a children’s book format rather than a traditional one. I also created a digitally painted triptych which showcased three important locations in his childhood. My Zenith helped me grow in many different areas and I learned many new skills. I am extremely proud of myself for creating a product I take pride in which also gives back to our community.

I would like some feedback focused on how well you thought the narratives of the two books worked in each project. Did the writing and the imagery help accentuate the most important aspects? Did you feel like the stories were clearly and thoroughly told, or were you left with ambiguities or questions? In short, if I decided to rework these two books, what would you suggest I do differently?

Next year, I plan to move to Townsville, Australia to participate in a medical missions gap year program with Youth With A Mission (YWAM). I’m looking forward to being in a new place and having the opportunity to meet new people and learn about a new culture. After my gap year, I will be attending a four-year school and am currently looking to become a nurse or a physical therapist.

You can reach me at kaitlyne@freestyleacademy.rocks

For the Documentary Project, we were tasked with the idea of portraying the story of an interesting person, group, place, idea or issue and finding contemporary research sources to develop a perspective on the subject and determine their significance in the community. I did my documentary project on my grandfather, Robert Matthews. When he was in college, he contracted bulbar polio. The polio paralyzed his pharynx (vocal cords) and left lasting damage on his neck muscles, leaving them weak. I chose to write it about my grandfather because I realized how little I knew about his life and what an incredible story he has to share. I can only hope that through this project I did his story justice.

To see the digital version of the book, click the image of the cover below. 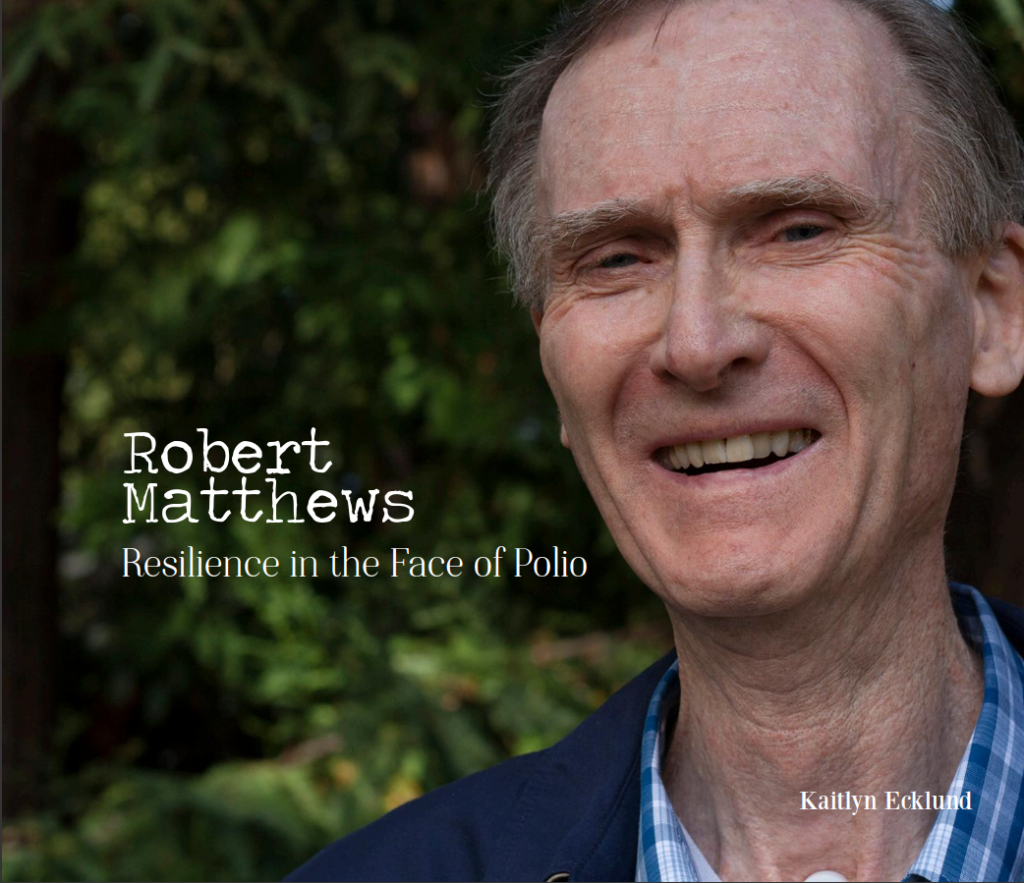 I used Adobe Photoshop, Illustrator, and InDesign to create this book and bring it to life. During this project, I learned a lot about photography, writing non-fiction and making sure that all of your elements come together to enhance the narrative of the individual. This was the first really big project that I did on my own and overall I’m proud of what I was able to accomplish. However, I look forward to hearing your feedback and understanding more about what I can improve on.

For the Zenith Project, we were encouraged to push our boundaries and try something new. I really enjoyed the Documentary unit last year so I decided to make another book, as well as a digitally painted triptych. To push myself, I decided to create a children’s book that was still a documentary about an individual’s life. This allowed me to utilize the skills I obtained during the Documentary unit while still expanding my skill set. The story is about a Liberian refugee, named Ansu Dolleh, who lived through the Liberian and Sierra Leone civil wars before being adopted and brought to the Silicon Valley.

To see the digital version of the book, click the image of the cover below. 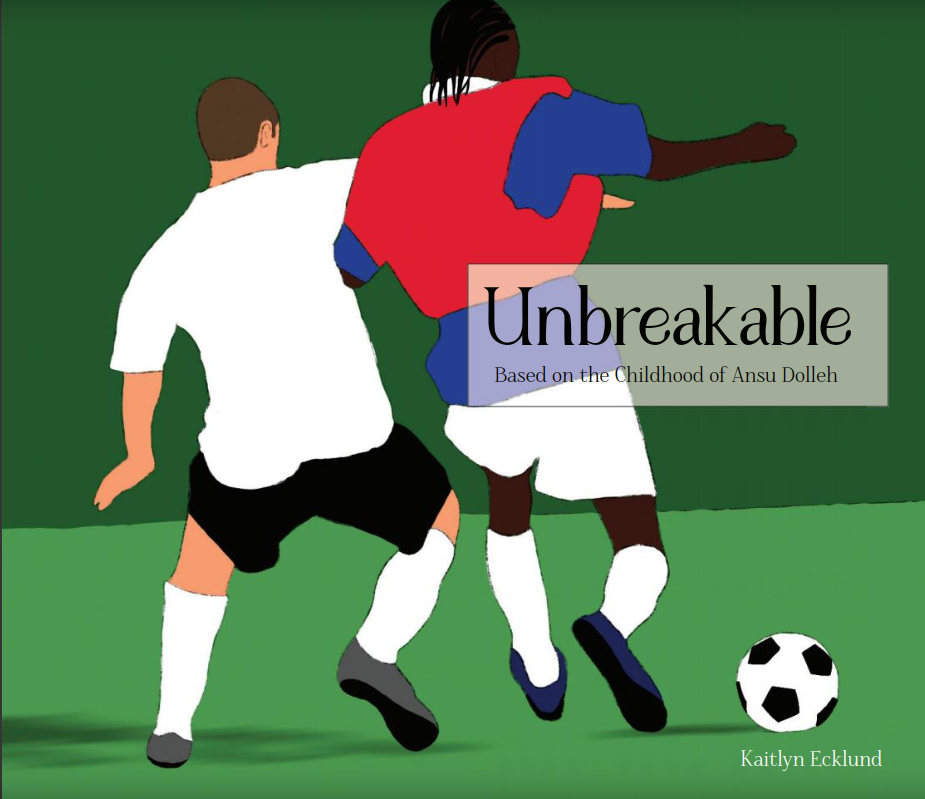 I used Adobe Photoshop, Illustrator, InDesign, and the Procreate app on my iPad Pro to create this book. The illustrations were completed in Illustrator and Procreate, photos edited in Photoshop and it all put together in InDesign. This project was much more challenging than I had initially anticipated. Making such a tragic and at times graphic story appropriate for children while still not “erasing” or taking away vital pieces of the story was one of my biggest obstacles. I wanted to keep the story as authentic as possible while still maintaining my goal of having it be a children’s book.

Additionally, I underestimated how difficult the illustrations would be. I experimented with multiple styles of illustrations and applications before settling with Procreate, while still using Illustrator for a few of them. I wanted to incorporate the vivid colors of West Africa and a rougher style of illustrating to make it less refined and seem more fitting for a children’s book. While I am proud of my final product, I am interested in ways I could’ve had it be more engaging for the reader and new techniques I could’ve utilized to produce a more professional product that could be sold.

For the second part of my Zenith Project, the triptych, I used Corel Painter to paint the three landscapes. I had never used Corel before so I learned a lot about the application but also about painting and different techniques used to create different textures and illusions. There are three separate panels that come together to create my triptych. The first panel is of a sunset in Liberia. This is meant to represent the end of his peaceful life with his family and the beginning of his life on the run. The second panel is of the Sierra Leone jungle at night. It is meant to represent the five years spent on the run in the jungle and the darkness that accompanied that time for him and his family. Lastly, the third panel is of the San Francisco Bay. It is meant to represent the new fresh start that he was given coming to California. After completing these paintings, I have a greater appreciation for painters now that I understand more of the difficulties that come with painting landscapes. I also printed the panels on canvas and stretched them on 10 x 20 frames to have a tangible version as well.

The three panels are displayed below.

I have chosen these two projects to present to the panel because I believe that they are my best and most meaningful pieces of work. Freestyle has given me the opportunity to create fun and innovative projects that allow me to be more creative and grow as an artist. However, I also believe that part of growing as an artist is producing meaningful work that creates an impact. With both of these projects, I felt that I was able to give back to my community in some way and contribute positively to it. It may have only really affected an individual or a family, but I believe that it is a step in the right direction to continue to touch others and create change or bring awareness.

With experience that these projects and my time at Freestyle has given me, I look forward to using my skills in the future to share others’ stories. I enjoy getting to know new people and hearing about their lives and I think that it’s important to reach out and to create those situations for yourself. You never know what you will learn from someone else and their story. Freestyle has opened my eyes and I hope that my work does the same for others. If I have inspired someone to put themselves out there by engaging with others and to look for new opportunities, pushing themselves out of their comfort zone, then I would consider all the blood, sweat and tears I’ve put into these projects worth it.

Thank you for taking the time out of your busy schedules to review my work and give me feedback. I look forward to hearing your thoughts about how I can grow more as an artist in the future.