Skip to content
The narrative unit served as an outlet for us to explore different mediums or storytelling, and what makes a good story. In English class, this includes writing short stories that imitate other’s style. In digital media, we continued to practice adobe illustrator, as well has had a personal illustration project and learning basic html coding for our websites. Finally, in animation we created original stories to animate, and explores new ways of animating using adobe photoshop, illustrator, stop motion, and after effects.
Our assignment in English was to write an original story, inspired by the book we read during this unit. In my case, “The Things They Carried” by Tim O’Brien. This original story was to encapsulate the moral and ideas presented in the original work, as well as written in the author’s style. I was to write about the Vietnam war, and how it negatively affects its victims. I was heavily inspired by the Fist chapter of O’Briens, book, which gave a detailed list of various items which soldiers carried along with them during duty. Taking one of these, candy, I explored an original character based off of this idea. I based my story around how candy may represent a sense of childhood innocence which the war can destroy in people. O’ Brien’s style has extremely influential in my work, aiming to show the true nature of war, not exaggerated nor changed for the sake of telling the story. After writing the story, in digital media we were assignment to record their short stories, and alter the audio on adobe audition, adding ambiance, music, sound effects…etc. with the purpose of creating a more engaging storytelling method. From doing so, we learned the basics of a new adobe application, audition, as well as how to write a cohesive story to convey as specific message. It was extremely useful learning how to write a story in english, because art is essential fully of different storytelling mediums.
Hedgehog

Bow Davis carried pink hubba bubba gum. The too sweet, the too much kind. He chewed whenever we began on mission of traveled. I have never seen him without the package of the scrap wrappers which he would fold in to small paper boats. It was hard not to be close to him. I remember him telling jokes and giving me hug on my birthday. Like a kid.

Bow had dark curly hair. Even with his head shaved you could see the small ring pattern on his scalp. He wasn’t particularly good looking. He had a particularly round face despite being real thing which made him look particularly young. There were once rumors that spread that he had taken the draft in place of someone else. It didn’t help that he had a very bright personality as well.

But the war did not care.

During a squad raid of a small village on the mountain side, he had lost his life. Word got around that he hesitated to shoot a family, and the mother, scared to death, stabbed him with a kitchen knife. That family was later terminated by the other squad members. The rest of us knew that something like this would happen eventually, however that did not mean it hurt any less. It was one of the more tragic endings. One undeserved.

It reminded me of the hedgehog’s dilemma. As soldiers we seek comfort in small things, such as human bond, but the closer we get, the harder it becomes to do our jobs. Thus many soldiers carried around material vices, in his case the gum. Even when the gum got wet and soggy, he would still pop one into his mouth and tell us the story of how his mom used to buy them for him whenever he got an A on a test.

For a long time this event quite bothered me. The idea that the woman had just tried to protect her own child’s life, even in giving up her own life as well as that of the soldier. This common sense which we had to disregard in hopes of a greater good. This moral ambiguity came across most of the soldiers. Those who were unable to ignore the fact often died. Case and point.

When it was announced that bow had died, a very few of us had cried. It was the realization that if you don’t shape up that would be the end. None of us wanted to admit however, that it was his own fault.

It was not his fault.

At the time of the raid, we were relatively close to an outpost station. Fellow troop mates and I took shift carrying his body back, in hopes he would be able to be returned to his family. With each stepped his body seemed to get colder and colder. I often wondered if it was even worth all the trouble.

We carried on with our missions. Tried to not think about thinks that mean too much.

As soldiers we had to ignore all common sense and out personal feeling for the sake of fighting for a cause we were forcefully put into.

Three weeks later I was injured during hand to hand combat, breaking my ankle. I was then dispatched and allowed to return home fo the time being. There I decided to visit his family and explain what my thoughts of him was. They were very humbled by the fact that he was an optimist even in situations ife that. It seems like you either stay innocent and die early of watch yourself become empty, pouring so much of ourselves out.

They then took me to visit his grave.

The air was partucatry fresh because it laid right next to the sea. I would see the white boats docked in the distance. It reminded me of the small boats he would fold out of the leftover gum wrapper, which he would refuse to throw away.

A beloved son and soldier

Despite spending so much time with him, I had never asked for his age.

In five years you could graduate college, travel to other countries, settle down, get a job, have kids and so on. But those 5 years were ripped away from him, along with the rest of his life.

His family then thanked be for coming, and I proceeded to return home. Driving back was an unreal experience which made me have to pull over on the roadside and burst into tears. Back then it didn’t mean much. Another of the thousands of young soldiers who were unlucky. It seemed so much real to me know, that they were in fact not random people, but those who had lives of their own which I had no idea about.

After my ankle healed I returned to Vietnam. I didn’t talk much to the other soldiers out of courtesy.

For our website, we were instructed to create 4 header images for our narrative pages. I went with night sky theme. We also had a personal illustration project in which we had complete creative freedom to create whatever kind of image using Adobe Illustration. My illustration was originally a hand drawn image which I then scanned and colored/refined on illustrator. 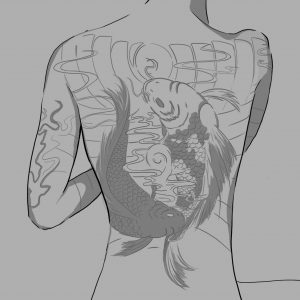 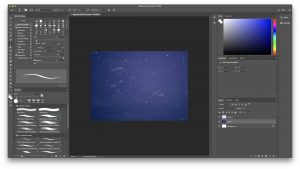 In animation we worked in group of three, Isabella Levinston, Alex Carlton, and I, to create a 1-2 minute short film. We started out by creating a story board and concept designs. Our story, titled “no shot”, was worked on for 4 weeks on a mix of Adobe Photoshop and Premier Pro. One of the biggest challenges we faced in this project was the time restraints/tight schedule. 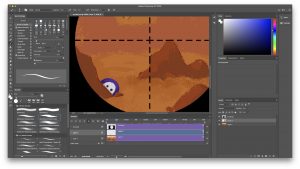 We also worked on a parkour rotoscope, which involves animating over live video footage. We learned how to do so as a tool for our narrative projects. We used this in the scene of one of our character’s hand grabbing a rock. It is used for a realist appearance that mocks reality, however can sometimes be uncanny. Using a parkour video provided and the adobe photoshop, we drew over each frame of the video.
Finally, we worked on a mood scene, which required us to create 2 original designs for characters  as well as one walk cycle on adobe photoshop and the other on adobe animate. We also built background sets in real life using paper, cardboard, foam board, and other materials. 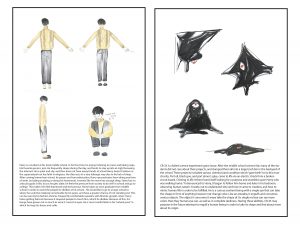