The reflections unit served as a way for us in out seccond year in Freestyle and last year of highschool to look back and better understand who we are. This mean learning about the messages we intent to portray throughg our art. With that intent in mind we created projects that reflected our thoughts. In Egnlish we came up with a list of essance objects which represent our natural selves:

We were given an opened prompt to create around a 2 minute video discussion our opinions on any given topic of choice.

Art is a form of informal, unconventional communication, yet the most ubiquitous method for understanding one another. The awkward in me prefers this way to communicate rather than speaking. My art tends to echo themes of social isolation and how various cultures can relate to modern society. A more recent project, an animated GIF of a wearable sculpture composed of an arm made of wires and scrap technology, explores the isolation which technology has caused in the contemporary world. Nowadays sending GIFs or memes through the internet is more frequent than talking face to face. Yet it is those never ending looped videos that further isolate us from one another, preventing or rather hiding the small nuances of true emotion that would otherwise be visible through traditional in person communication.

Technology has caused massive tension in the way that I communicate with others. While I acknowledge how technology has closed us off from human connections, I appreciate that modern technology has provided me with a sense of comfort in shielding myself from other people. It is this dilemma which I often explore within my art.

Working through these feelings of tension has lead me to create unconventional fashion pieces. The aforementioned arm sculpture paved the way to the creation of a headpiece of similar a nature. Both wearable pieces connect to the hidden form of self expression in the things we wear.  Fashion design has always peaked my interest. It is one of the most upfront ways in which humans communicate with one another, and I prefer this unconventional kind of communication in particular. For one fashion has allowed me to explore the different personalities within myself. On the daily, what I wear shapes my mood and has a large impact on how I understand others.The fashion choices we make influence other people’s perception of us, which consequently influences how we view our sleeves-sorry I mean selves.

While visiting the Museum of Modern Art, Students were assigned to currate art we think represents oursleves, as well as pieces that we do not. We then had to explain our opinion of each piece 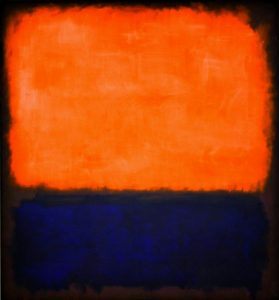 What really draws me to this piece is the emphasis on simplicity and emotions. I think art, essentially, is made to draw emotions out of us. With something as simple as the use of color, Rothko is able to portray emotions to his audience without getting wrapped up in the details or complexity of art. Rothko’s purpose is to create pure emotions, which is highly respectable and why I would like to put it in my personal museum. 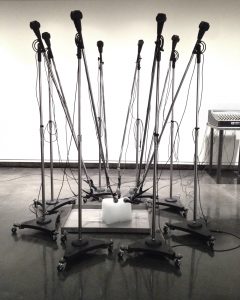 I like modern art that is out of the convention. One of my main values is going beyond tradition. Sometimes that can mean questioning what can be considered as art. Modern art can bring controversy to those who favor tradition, however I believe that good modern art can go beyond the abilities of a painting or drawing. Furthermore I find the title to be very intriguing Ice reminding me of coldness, which can relate to the vibe and color scheme of the work. 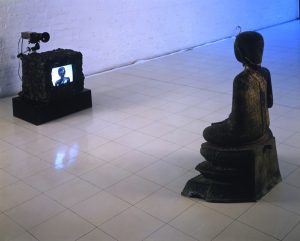 I love how the art spans across multiple walls, requiring a view to move around to get the full spectrum of the piece. 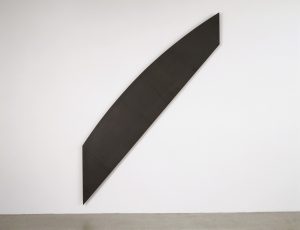 There is a saying that good modern art has to A. intrigue emotions or a story, and B. Be something that other people can not think of. I think that while it is arguable if the piece relays emotion or not, I do not think it is the most original. It is not lazy by any means, but I do think that The concept for this piece could have been made up by many people, which I why I would not like to have it in my personal museum. 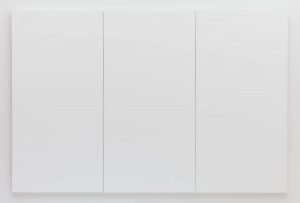 For the same reason as the piece before, “Curve IX”, do not think this piece is very original or innovative. It could be a comment on how anything can be considered art, but unlike Rothko’s color painting which house depth and character in the brush strokes, This painting is hard to go off of. While it could be my understanding, this is not something I could find myself looking at for a long time or being intrigued by.

With the work that I have curated, I think that I chose work that I could possibly see myself creating. I think that all the work, including the ones I did not like, that I have curated are all of those that fit my aesthetic. I also subconsciously tried to choose pieces that were not so traditional. After creating a portfolio for college applications, I can to realize that much of my art is multimedia and has themes of social loneliness and technology. Looking back, I do think that the art I curated is very similar to my own aesthetic. Pieces that didn’t make the cut tended to be modern art that was not creative. I think that one of my core values is innovation, which could explain why I did not like these pieces.

After reflecting upon our artistic intentions, we were lead o create Mandela using repetition functions withing adobe illustrator. Upon finishing our teacher then lazer carved them into carious materials.

Communication is fascinating. Be it language, practices, lifestyles, etc. My interest in culture drove me beyond the simple exchanges of heritage between my peers and me.

In early schooling, when it was disclosed that students were required to take a foreign language, while most saw it as a hindrance, my exuberance was through the roof. Overly excited, in middle school, I begged my mom to sign me up for outside of school Japanese and fell in love with the language. I would then go on to engage in community festivals, participating in a homestay program, and of course taking courses in highschool.

Then during my sophomore year, I took it upon myself to engage in more foreign cultures. I joined the Mandarin club, which I would later become the president of and began taking Korean lessons. Studying Korean helped me better connect with my own heritage, and understand my parent’s past. While of course it taught me how it literally speak to my mother, I learned how to better communicate with her because of a better understanding of the culture which she grew up in.

Studying languages has not only taught me about my own life, but it has also helped me learn better ways of communicating with other people. From the skills I have learned from studying languages, I apply them to portraying personal messages through my artwork. My most recent project, an animated GIF of a wearable sculpture composed of an arm and helmet, made of wires and scrap technology, explores the isolation which technology has caused in the contemporary world. Nowadays sending GIFs or memes through the internet is more frequent than talking face to face. Yet it is those never ending looped videos that further isolate us from one another, preventing or rather hiding the small nuances of true emotion that would be visible through traditional in person communication. Be it speaking, writing, drawing, and so on, learning how to relay messages to other people has become a hobby I find very engaging.

Communication has always played a pivotal role in the way I perceive the world. Without things such as languages or art, people would not be able to understand one another. Rather than branding myself as an artist or a linguist, I take pride in being a person who explores the various methods of communication. 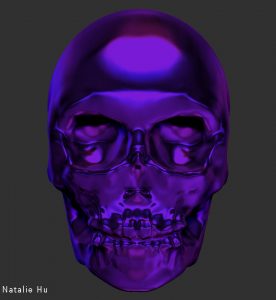 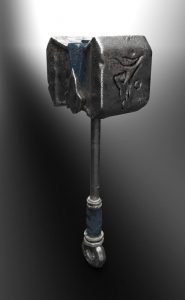