During this unit we created narrative stories and worked on developing our own worlds. I really enjoyed this unit because of the freedom I had with my projects and what I was able to create with many different mediums.

In English we created a narrative story and focused on storytelling without dialogue.

Color for the living, letters for the dead

The clocktower rung note after note, making the air seem even more dreary. The land of the dead did not have a color, only black and white, impossible and absent. Keir drew the letter from the bag at his side and walked up the steps, sliding it into the door. It made a short thunk as it hit the ground on the other side. He continued his journey down the street placing one after another into each door, scanning the address, sliding it into the metal slot.

Few people stood on the sidewalks. There was no point to look up past the tops of buildings because the sky was a never-ending sea of overcast clouds. Keir would do his best to avoid the others, eyes down and hood up. For a second he glanced up, a woman was pacing slowly step by step with spindly arms. Her face perpetually void of emotion, a walking corpse.

He was only a messenger, give the letters to the empty people and nothing more. There was never a return address, just a name and a number. Every day more rounds, more letters to deliver, he never bothered to open one. Keir had no interest in what was inside – what good would come out of reading a letter meant for the dead?

He slowly walked past a rusty gate. The only noise was that of shambling footsteps or the occasional caw, not the soft chirp of a songbird but the harsh laugh of crows.

He removed another letter from the bag at his side and felt the sharp edges and smooth surface. He flipped it over and read the lines on the front, looking up and matching it to the apartment. It slid smoothly into the metal slot and fell on the other side. He reached for another, flipping it and reading.

He read the address and stopped moving, peering at it a little closer. The numbers did not match; they didn’t match the next home, or any on this street. He scanned further down the white letter. He gripped the paper. black ink printed his name, his family.

When he had taken up this job there was a constant irk in the back of his mind, telling him that maybe one day he would be giving a letter to his mom, his dad. That he would see them among the pale-eyed walking dead in the streets, their faces  placid masks.

He started to run, moving fast. The figures around him seemed to move in slow motion.There was no time to give out letters – only time to run. He had not forgotten his old life: the holidays, the smiling faces. They still resonated with him, but he had accepted this one. Accepted that at this time this was his job. Even in the world of the dead he would carry on, but not like this.

Another turn on the road, another jumped sidewalk, another step. Finally, Keir slowed, forcing himself to look up to the people walking there, afraid that one of them would be a familiar face. He took a deep breath and tried to calm his beating heart. Steely eyes scanned the street, but on the empty street stood nothing but a grey fog. Blank and dull, just like every day.

Slowly he walked up to the door that the address was on and gently slid the letter in. Keir lifted his hand to knock.

No one answered. He waited another minute before dropping his hand to the handle and twisting. It gave way without resistance. The door swung open without noise, inside was empty. He stopped before entering, uncertain if he should, but then pushed forward with resolve. The walls, the room, everything was empty. He picked up the letter and moved a bit further into the dead space. Nothing, he was glad, nothing was good. The corners of his mouth tilted ruefully – not yet, it had not happened yet. Carefully he placed the letter on the ground and moved back towards the door. The letter would wait to be opened. Even if he never came back at least they would have it. Keir stood back outside in the grey, with his bag of letters. He started to walk one by one to each door, and didn’t look back.

To accompany our narrative project we created an animation. This was my first long animation and long term project. Although I was not very versed in drawing I still tried my best. I think that the product could have been better but I needed to learn more.

In design we created a scene and also combined animals that reflect on our character. Here is what I came up with in Adobe Illustrator.

In Animation we also created physical puppets used for walk cycle learning, but we had to give them a personality and a backstory. Here is the work I did on my puppet and the walk cycle. 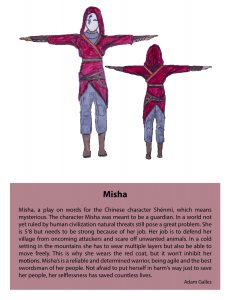