Zenith, being the one big project that will conclude my Freestyle career, is a very interesting thing to start. It is our final project as a senior at Freestyle Academy where we get to choose what we do. I wanted to make it a big production and since I am passionate about what I am doing I wanted to make it better than what I have done before. I was excited to begin something that would be the culmination of everything I had learned and taken away from freestyle.

I have always wanted to pursue animation, but am usually unsatisfied with the quality of work I have produced so far because of my inexperience with art. I want this project to be uniqely mine and to live up to my own exepcectations of what I can acheive with animation.

This project is a risk because we are simply using a different form of animation than we ever have before, rotoscoping 2D stylistic animation over 3D MAYA animation. It is also the first time I have ever working in a group, my partner being Addison L from the PM Senior class at Freestyle.

This will truly be a cumulation of my skills here at Freestyle, making sure that I keep to all of my animation principles, following the rules of design, and incorporating more adobe programs than any of my other projects into into this one. I want to make it look good and I am determined to finish this ambition animation project.

Before the official start of Zenith I had created a song in Reason for my Freedom Project before ski week break. This was so that I had somewhere to start, I wanted to animate over the song. Here is my process for coming up with the idea and also pitching it to my animation class.

For this project I am working with Addison L to create a clean animation with good perspective. We wanted to work in a group just because of the amount of work that it would take to complete an animation which has a total time of, or has the goal of reaching, 2 minutes and 10 seconds roughly.

Coming up with the idea:

We want to animate from a 3D Maya model to 2D to compensate for our lack of proportion experience and also make sure the character stays normal. We want the animation to feel fluid but at the same time keep our own artistic styles.

To accomplish this we would use a basic Maya model and rotoscope over it.

We were going to create a chase animation over a fast paced EDM song Adam had created and refined during the period in digital media called “Freedom Project.”

We wanted to try and use a lot of strange and abstract shots to push our reasons for using animation as our medium. We also want to incorporate many more animation principles than we have used before as well as many drawing effects.

We want to show our improvement.

The animation concept stemmed from the idea of how we always run from our fears and the hardest thing to do is to overcome them. It was about how they initially form inside of us and the struggles that comes with our own fears. This is why Adam chose the name: Daunt.

Addson plans to have the characters be super vibrant. The character being dominated by neon green/blue while the monster dominated by luminescent purple/pink while keeping a rather dark and monotone background for contrast. The vibrant colors would be for visual cues to ensure that the viewers knew which was good and which was bad.

From here our plan was to block out parts of the songs as different scenes so we could discern the action that would be taken due to the intensity of the song.

Since it was the first time that either of us had used both 3D animation and 2D animation in the same project I created a test fram that took about 30 minutes to complete the whole thing. The first one is just the project in MAYA that I created roughtly. The right side one is also my drawing over the frame to make it come out as an actual animation, the character design is on the bottom right. 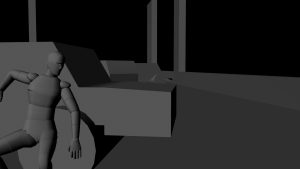 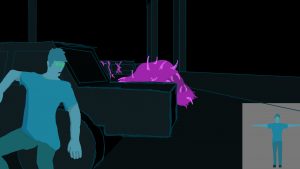 The process has been hard and I have gotten all of the 3D animation done which is a huge step but I still wish I had gotten it done sooner. I was able to work with MAYA and finish it up and now I will work with Addison to finish up the whole project. Here is the 3D animation without the 2D over it.

Here are some images of the MAYA files from different angles not included in the film. 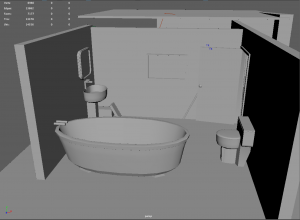 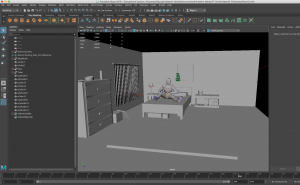 After the last week of Zenith both Addison and I tried to get the Zenith done, although we have don’t a LOT of work to get something in we did not finish the 2D outlines like we originally set out to do. Probably my biggest takeaway from this project is time management and knowing my strengths. I know that I am not the best at doing 2D drawings but I like doing 3D animations. I think I learned a lot of valuable information and gained a lot of good experience with both Photoshop and Maya. So overall, the project didn’t go exactly as planned, but I am somewhat happy with how it turned out. I may or may not go back to it to make it whole/revise the project.