In early February of 2019, perhaps the most challenging project of junior year had begun: the Documentary. With this project, we were tasked with making a documentary paper, magazine, and film/animation/book about a specific group, place, person, or group in our community. What made this such a challenging project was the goal to make the subject entertaining and educational at the same time. To do this, we had to gathering primary and secondary research sources like interviews, books, and articles to provide the academic and educational piece, and we had to creatively use these to paint a journalistic narrative.

So with my partner Alex Beattie, we decided to document the modern uses of drones. Alex had a friend who was into FPV (First Person View) drones. These are drones that are piloted with VR goggles that have radio transmitted signals that give video feed from the drones themselves. This makes the pilot feel like they are flying from the inside of the drone. This subject fascinated Alex and I, so we explored the uses of these drones as well as other cool ways that drones are used.

This was the first time I had taken on someone else’s idea for a project instead of my own. For my Experimental and Narrative films, I was the main coordinator in terms of my vision and goal for both of those projects. In the Narrative film I got to experience accepting changes to my own original idea, while in the Documentary film I got to experience contributing my own ideas without tarnishing my partner’s original vision.

This is also the first time I’ve taken such an academic approach to film. I recognize that if I want to pursue film as a career than I should try working with different genres to see what suits my interests. While I did not take a particular liking to documentary film, I am very glad I learned about it because it taught me about how to effectively research a topic and how to reach out to people and establish contacts.

My partner Alex Beattie and I did a documentary on drones. Our angle on the subject was that drones are beneficial because of the modern uses that they bring to society today. Me and Alex’s angle changed multiple times in researching our topic because at many points we were interested in specific uses of drones and getting to much into that. At one point we both realized that we just wanted to show that drones are cool in general because of the new ways they are being used. We could support this with viewpoints from student engineers who were building drones, drone racers competing against each other, and drone promoters at Intel without specifically going into either of those topics in depth. We decided not to touch on the military and surveillance uses of drones and instead focused on the nuances. 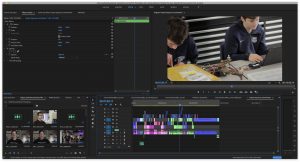 This was our Adobe Premiere Pro file we edited our documentary in. Originally, the documentary was only going to have the parts about drone racing and engineering, but to make it a complete documentary we felt we had to find another modern use of drones which is when we stumbled upon Intel.

I learned a lot about the importance of reaching out, establishing contacts, and maintaining relationships with other people. The Documentary project is solely dependent on your subjects so you need to make sure you are on par with them completely, which is very hard to do but I think I really grew in this area. Before this project I felt a reluctance to go out and get the footage I needed to get or put more effort into making sure something was perfect, but the Documentary really helped me get out of that mindset and get me to go out and get work done as well.

Here are our interview transcripts from the 7 interviews we included in the documentary. We had to cut a lot of content out that we wanted in the film but didn’t have time for.

A big portion of documentary production is researching the topic we chose. In order to learn how to expertly present a body of research, we wrote a paper on our subject. The research paper assignment gave me an opportunity to put my own focus on someone else’s topic instead of working with someone else’s vision like I did with the documentary film. I was required to write 8-10 pages and incorporate annotated research sources including books, articles, and personal interviews. Here’s how it turned out:

No film, paper, or any other kind of project that requires development to a final product can go without criticism and revision. In the process of writing this paper, I was faced with harsh criticism that made me reflect on my original vision for the project and correct it for the better. After going through the process of correcting it, I knew my paper would not have come out as good if it wasn’t for the feedback I received.

Going into the Documentary Unit, we had absolutely no idea what constituted good lighting, good interviews, and good camera work for those interviews. After learning about those rules in class, we had to attempt to create a mockumentary exemplifying the techniques we learned. Some of those rules included making sure the camera is on the subject’s eye level, making sure light is in their eyes, having a dual camera setup, etc.. The mockumentary could be about anything as long as we tried to follow the rules. So, we made a mockumentary about dumpster diving! I will admit, our group was maybe too focused on the content enough to follow each rule for filming interviews, but we tried our best and this is what we ended with: