Our reflections unit was all about answering a single question: Who am I? Pretty simple, right? To answer this question, we examined ourselves through consuming art, making art, writing, and video production. This project helped me culminate an image of myself that I truly appreciate.

Finding out about ourselves involves finding art that resonates with us and displays our values. Conversely, we find art that does not represent us at all and displays values we do not connect with. To accomplish these things, we took a field trip to the San Francisco Museum of Modern Art. 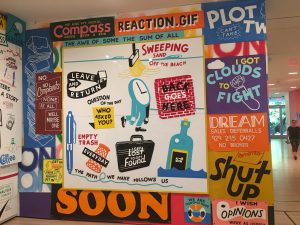 Much of the art I create involves drawing lots of funny emotes and situations in random doodles as well as comics. I think this piece speaks to that style of art which I didn’t consider as such. I value humor in my everyday life a great deal and this piece resonates with me in that way as well. I remember the instant I saw this, I thought about how relatable it was and how I could connect it to my life so easily. 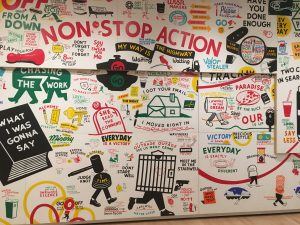 In the art, I make that was mentioned in the previous piece, I often just end up spewing my thoughts and emotions onto a piece of paper and apply meaning to it. I feel like this exemplifies that well. This piece also makes you pay attention to all the little details, which may represent a way of perceiving life which resonates with me. I also like that this piece has so many obscure words and phrases. You don’t have to write a full paragraph about something to communicate what you’re feeling. 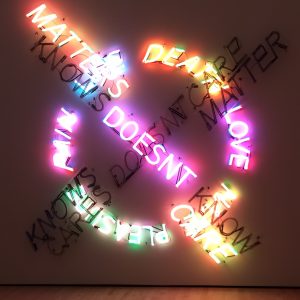 I think the way this piece by Dan Flavin captured a piece of myself is in the way it “moves”. The neon lights flash different words instead of lighting all of the words at the same time or just lighting some of the words. I think this reflects my thought process about things like life and death like it seems to suggest in the piece. This piece is also relatable in some way. You may not be able to express how it is in words, but you just know what it’s about internally. 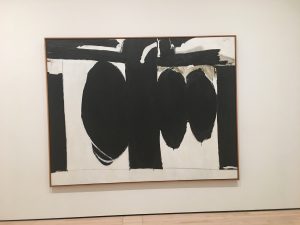 “Elegy to the Spanish Republic, No.57”
Robert Motherwell

While there may be some historical context to this painting I am unaware of, on its own, it doesn’t speak to me, personally. I don’t think the colors or the way the shapes are formed say anything about my life whatsoever (a.k.a. my thought process, my way of living, my inner struggles, etc.) To me, it is just some random blobs of black, white, and a little grey. 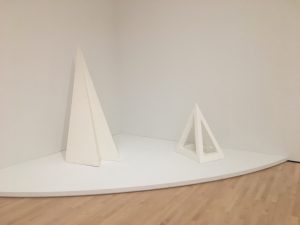 When I saw this piece of art, I immediately seemed to recognize how this was not representative of myself. I looked at it and thought, “I am not geometric.” I’m not exact. I’m not calculated. These are all words used to describe this piece of art that I don’t think are words you could attach to someone like myself. Also, why was this made? They’re two pyramids. What for?? Why? I don’t get it.

My art influenced the first two choices. I value expressing my emotions in a way that is subtle but not so obvious that it’s painful and not so abstract that it’s confusing as all hell. The specific pieces that didn’t make the cut were too abstract for me to understand and align my values and emotions. The ones that did make the cut, however, were able to communicate enough for me to make connections to my own life experiences and art. 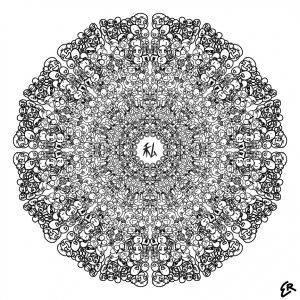 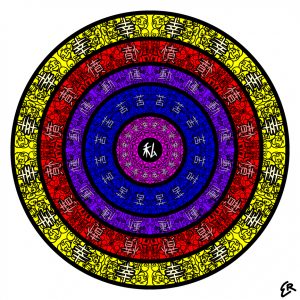 A mandala is a geometric Hindu and Buddhist figure that represents the universe in those religions. For my mandala, I valued being able to create something much different from everyone else’s mandalas. I draw little emoted characters all the time and I often clutter page after page with faces overlapping and going all over the place. I often draw these to express certain emotions, which is why I decided to categorize those emotions and culminate them in this repeating fashion.

The character in the middle is Japanese for “me”. I’m not Japanese (I’m Korean, people get it mixed up all the time like “oh you speak some Japanese, are you Japanese?” “No.”), but there’s a certain aesthetic about Japanese lettering that appeals to me and I try to implement it in my art.

A lot of the mandalas that are “beautiful” have very complicated and intricate patterns, but I think mine is beautiful in the way it represents me.

Here’s the video showing the reveal of the black and white mandala:

My friend Trevor is the buffest guy I know. In seventh grade, he left school to go on a family trip to places like India and Africa, and he came back from his trip looking extremely ripped. He was so big that teachers in eighth grade mistook him for a trespassing high schooler. As we head into our senior year, I’m pretty sure his forearms are bigger than my legs.

Heading into high school, I was a twig. Many of my friends are athletic; I am not like my friends. During freshman year, I had to take P.E., which included a swimming unit. One day, one of my classmates told me that her friend had commented on how skinny I was. I held my towel a little closer after that.

During sophomore year, I decided to sign up for weight training instead of regular P.E. The only time I could fit this class was during “zero” period. The weight training teacher let me in, even though he obviously held some doubts. This particular class was for advanced weight training, the class football players took. So, on the first day, Twig-san (me) walked into a room of about 30 of the buffest, most Chad-esque guys in the school. I started with weights that the football players would’ve felt were like lifting air.

For those first weeks, I constantly heard snickering whenever I tried to lift weights that, at the time, felt pretty freakin’ hard to me. But every morning at 7:15, I was there. After a while, some of the guys asked me, “Why are you here?” Maybe I wanted to level up from twig to… branch? The branch level definitely would gain more respect than the puny twig level, right? I didn’t say that, of course, so I just shrugged and kept coming to class.

I signed up for weight training again for junior year: same period, same group. On the first day, I got a massive greeting from the football players. They seemed excited to see me, and strangely enough, I felt glad to see them.

Again they asked me, “Why are you still here?” That year, I had tough AP classes, I filmed all the school’s football games, and I was balancing a demanding creative arts program for filmmaking where I frequently took on roles like director, producer, screenwriter, and editor, to name a few.  So you probably think it was a stupid idea to add weight training on top of all of that, huh?

On the contrary: even though the schedule felt hard, it felt possible because the football players were there for me. They’d help me with my lifts and cheer me on even though I knew my weight goals were way below theirs. They showed sincere appreciation for the game films I captured. They treated me like a real member of the team.

This experience made me think about which traits help me overcome obstacles–not to some dazzling vision of success, but to achievements that feel earned and satisfying. One trait is persistence, like sticking with weight training even though it didn’t make sense in terms of timing or group dynamics. And two, collaboration, like winning the football players’ support by showing up and doing the work.

I couldn’t help but notice these aspects in other areas of my life. I got my personal bests in weightlifting. I got great grades. I made films for my creative arts program that I am really proud of. I asked a girl I thought was way out of my league to prom, and she said YES!

Persistence and collaboration aren’t the secrets to everything. It didn’t stop that girl from breaking my heart later that year, for instance. But I recognize that these qualities get me to places I would never, ever get to see otherwise.

To learn how to use After Effects, I created a video for my personal essay with images and voiceovers.

Our film assignment for this unit was to make a video that essentially shows who we are. We had to put ourselves in the minds of college admission teams and think about what we would want to see most from ourselves. To film this, I had to get help from my friends and teachers as well as film myself, by myself. This was difficult because I had to set the focus while still being the subject, I had to figure out the framing even though in the moment I was not able to see what was coming out on the camera, and had to act while thinking about all those creative aspects.

Here is my final product: