The Narrative Unit during senior year involved a broad range or projects. Everything began in English with our reading of Citizen: An American Lyric by Claudia Rankine. The book discusses several aspects of what it’s like to be an African American in the United States in a unique style that uses poetic devices and experimental form to tell stories. After reading this book we began a process of writing a lyrical essay. We did this with the intent of understanding an identity different from our own. To do this, I interviewed a friend of Asian-American decent. After talking with her, I was able to learn more about how her life has been impacted by her identity, and I used the emotions and main ideas of what she told me to create a lyrical essay (shown below)

The narrative unit kicked off in English. We read Citizen: An American Lyric by Claudia Rankine. Her book explores what its like to be African American in the United States in a unique form of writing that combines poetry, essay, research, and narrative. After thorough reading and discussion, we went on to explore how other identities face struggles and biases. We wrote a lyrical essay inspired by an identity different from our own. I interviewed someone of Asian descent for my project and used the emotions she conveyed in our conversation to write my lyrical essay that is linked below.
Lyrical EssayDownload

After writing the lyrical essay we moved the project to Design. Our first assignment was to practice street photography. Our photographs were supposed to capture an emotion, and after several rounds of practice, we settled on one photo that related to the character in our lyrical essay. To create the Citizen Diptych we first edited our chosen photo, gradient mapped it, selected our main point of interest and copied it onto a white background, and added warped text. Below I’ve left a copy of my original photo and the diptych. 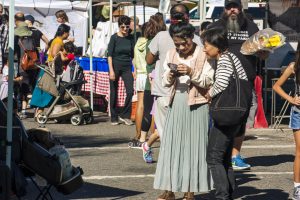 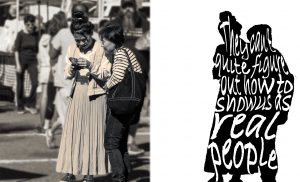 After we finished with our Citizen Diptych in Design we moved onto a challenging new project. The premise was to make a handmade book, but not just any book, a book imitating Japanese aesthetic. The first part was creating a cover. We had piles of paper to choose from to create a color scheme for our cover. I chose a salmon color for my front cover and a blue for the back. The next step was making a frame. We cut out different shapes out of thick cardboard. I stuck with a simple rectangle and covered it with blue paper that was decorated with fans and flowers. It took me quite some time to figure out what to put in the frame. Most of my peers chose to put beads inside, stringing them together across the frame, but I felt that the colors of the Japanese beads provided would only make my front cover busier, so instead made a little origami fan to put inside. It was quite tricky to glue it down, but I’m happy with how my adventure for a centerpiece turned out. Next came what would go inside the book. We were to paint Kanji onto rice paper as part of the book. To decide what Kanji should be chosen, we pulled quotes from our Lyrical Essay and chose an emotion that they conveyed. Then, we looked up the Kanji for the emotion we chose. We used a traditional Japanese brush and Black India Ink to then copy the Kanji onto rice paper. Another set of pages had the quotes from our Lyrical Essay that we had picked out. There were also five pictures we took with macro lenses to get close-ups of nature. We edited them in Photoshop and then added a watercolor effect to make them look painted. Sheets of paper covered in tea-dyed newspaper bits were also included. Those pages had different drawings painted onto them, for example, I had a crane in water. The project overall was an interesting journey, as it is the first time Design has pioneered the project at Freestyle. We ran into several bumps along the way. Overall though, I’m proud of how much I was able to accomplish in such a short period of time.

The last project we did in Design was an exploration in minimalism. We created a minimalist poster and ticket for a movie we created. In short, my movie was about a girl whose friend did not see eye to eye with her about girls being team captains in P.E., but after they go to the Women’s March together, her friend begins to understand after talking to many women about their own experiences with injustice. On the right my poster is displayed, on on the left is my packaging. The packaging is composed of silhouettes of signs on the outside, and on the inside is a more complex version of the t-shirt she wears on the poster.

In Digital Media we learned a handful of skills as the narrative unit went on. The first project was using the music production applications ProTools and Reason. As a second-year Digital Media student, I was given more freedom. I wrote a whole song and ended up not liking it, but it was part of the learning process. Instead, I did a cover of one of my favorite songs and small experimentation in classical music which you can check out below. 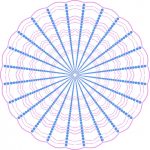 After sharpening our skills in music, we moved on to learn more about the Adobe app Illustrator. We set up a template and created two mandalas. One in color, and one to be printed on a surface of our choosing. I printed on a rose gold colored metal and then created another colored Mandala that’s shown below.

Our last project in Digital Media was called the Freedom Project. We were told to create a video on a topic of our choice and use the skills we learned to edit it. My friend, Tanshi, and I did a talk show called Talk. The topic we explored was self-esteem issues that girls and women have.