The reflections unit required an introspective approach. All our work was centered around the question of “who am I?” The hardest part of the unit for me was narrowing down my values. In English we were given a long list of commonly sited values. From fifty, we were to narrow it down to our most valued ten and then three. I’ve decided that as of senior year, the three values of most significance to me include communication, knowledge, and creativity. Of course, I expect that if you ask me next year they will not be the same.

So with these three values selected, we set off to write a personal essay giving insight into who we were and why our values shaped us to become the person we are. After that was written we made a recording in Digital Media which you can find below along with the accompanying text.

I listen to my suitcase clacking against the tiled floor that was once vibrant with the colors of the Venezuelan flag. I’m saddened at how quickly it has faded since my last visit but find solace in the embrace of my mother’s hand. Her mention of how she wishes my brother had been able to make it makes me want to retract from her grasp. Why would she want him to come? I wonder. He’s so ungrateful. How could she miss someone who so obviously doesn’t miss us? The age gap between my brother and I has always made our relationship complicated, but when he shipped out to NYU, he never called or texted, and I resented him for it.

“I don’t like him,” I say plainly to my mom. She drops my hand and whacks me, scolding me for saying such an awful thing. I know she’s right. I have to find a way to let go my anger. After all, every relationship is a two-way street. I decide I have to do my part. If he wasn’t going to answer my calls, I’d have to borrow the phone from my parents when he called them. If he wasn’t going to text me, I’d have to start sending him anything that would be easy to respond to – even some silly video would do.

I return my gaze to the faded floor that had once been a cheerful sign of reaching what I call home. Even though I wasn’t born in Venezuela, my mother filled our home with the culture. Am I Venezuelan? I ask myself. Does birthplace have jurisdiction over my identity? There have been many times where I’ve felt that being both American and Venezuelan has made me neither. It’s why I shied away from joining the Latino Student Union; the color of my skin didn’t match that of the other Hispanic kids at my school. Still, I make an effort to hold onto my heritage. I wear my necklace from Venezuela every day, help my mom make arepas weekly, and speak Spanish whenever I can.

My mother has been the one to help me connect my birthplace and heritage in order to build a stronger identity. It took me quite some time to accept her guidance and advice, but recognizing my obstinate manners has only made me stronger. I’ve found I can also learn from other sources of knowledge, such as books. For example, I am a proud feminist, and I’ve spent a lot of time studying to better understand what that means and how to wear the label with confidence. When my principal was cited in our school newspapers saying she did not know what feminism was, I felt the need to take action. I wrote her a letter explaining that while her personal beliefs do not have to align with mine, she should know what the term means because it’s quite an important concept for so many of her students. The parcel I gave her also included the book I had recently read: We Should All Be Feminists.

It is my belief that words are the foundation of relationships, regardless of whether that relationship is with someone you love, yourself, or someone you barely know. Perfect connections aren’t guaranteed, for instance, there is still a gap between my brother and I, but I believe that as we continue to grow we will work together to find common ground. It is my hope that by studying human rights I will be able to build bridges between identities in the international setting. Diplomacy can take many forms, in conversation, tying cultures together, or standing up for one’s beliefs. As I glance back down to the faded tiles of the airport in Caracas, I feel a new sense of hope. One day I will help repaint them.

To kickoff Design we started with an easy exercise to help ourselves remember how to get in a creative mindset and practice our photography and Photoshop skills. We went around campus and searched for how every day objects made letters. Once we had all 26 we returned to the classroom and picked out the letters needed for our name.

Next, we began studying the principals and elements of design, namely, balance, scale and proportion, repetition, emphasis, unity, line, shape, space, form, color, and texture. After several exercises of practicing lines and implied shapes with lines, we began the process of painting mock aboriginal line art. In Australia, many original paintings can still be seen on cave walls. Often times aboriginals drew animals that they were hoping would make an appearance in the next season. To keep with this theme, I related my painting to my brother. He currently resides in New York, and since he is far from home I often miss him and anticipate his next visit. He was also given the unfortunate nickname of piggy when I was young, and for this reason I chose to draw a wild boar. To do the actual painting, we dipped various objects, like the erasers of pencils, q-tips, and more, into acrylic paint. This gave us different sized dots to work with.

After our aboriginal line art was finished, we started a collage project. We ripped out random pages of magazines that had subjects that we found interesting. The whole point of the first step was to put juxtapose two images together that didn’t necessarily make sense. Once we were finished we traced the outlines of each shape on a separate paper. We then filled in each shape with a different tint or tone of the same color creating a monochromatic color scheme. This project helped us further understand shape and color. The last step of the project was creating a digital collage. 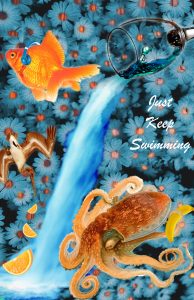 We followed the same processes of juxtaposing images, but this time also included typography. I had the most fun creating the digital collage. I started with all sorts of pictures, from carousels to cakes. I slowly narrowed it down and settled on a color scheme.The background was the hardest for me to complete. I cycled through several different ideas before finally settling on a galaxy themed orange background. You can barely see it though because on top I layered blue flowers. I erased the middle of all the flowers so that the orange would peek out. From there I added a wine glass spilling out water. Positioning and coloring the water was quite difficult, but Photoshop made everything easier. I also tinted the bird on the left hand side to an orange shade. There are a lot of little surprises throughout the collage like the seemingly ordinary goldfish wearing headphones or the octopus holding a banana. I had a great time adding these little details and I’m proud of how it all came together. The last thing I did was add the words “just keep swimming”.

After we had finished recording our personal essay in Digital Media, we begun a new project. Called the perspective piece, we were challenged to write a page that documented an opinion we had. The options were limitless. It took me a long time to decide what I wanted to write about. Since we had just written our personal essay I considered writing about some of my values, but it was not easy to choose which one to focus

on. I landed on communication and chose to write about how we often confront disagreements with rage instead of approaching differences as a potential learning experience. After it was written we were told to create a video on AfterEffects with images that went with a voice over. Since I had some previous experience with the Adobe application, I took some creative liberty and animated images. You’ll also see a screenshot of After Effects, the application I used to create the video.