Olivia Ahrens
The Visual Narrative Project began in English, where we wrote a short story and created a detailed character to be the star of our Narrative. Once we completed the final stages of the writing process and final draft in English, we then transitioned the project to our elective classes. I take design as my elective. We converted our ideas of our short story, and began to apply them to what we have previously learned in design. We first used Adobe Photoshop to compile images of different animals that have character traits that correlate with our protagonist. Once we had a rough draft of a unique creature, we imported the image to Adobe Illustrator, where we used different tools to trace the creature and make it our own. We repeated these steps to create a background that was a good visual representation of an important scene in our Narrative. When the background was complete, we put our creature in the scene to finish the illustration.
Our assignment in English was to write a narrative, or short story with a detailed main character. The inspiration for my story was school shootings and the recent controversy of gun control in the US. I produced the audio version of my story by recording it and using the application, Adobe Audition, to add sound effects to the reading. I value that my story came to life from creating an audio version because the emotion is easy to feel.

It was just before graduation. We seniors were getting ready  to say our emotional goodbyes, but also move on to a new and exciting chapter in our lives. Everyone was happy. The freshman finally felt older, the sophomores were about to become upperclassmen, and the juniors were celebrating yelling, “senior season”.  Summer plans were being discussed in the halls as students signed yearbooks and wished each other a good break. It was a great day. Or so we thought. It happened in my favorite class, psychology. I wanted to take this class my senior year to see if it would be a good major for me to study in college. I have never really felt intrigued by academic subjects, I have valued spending time with friends, traveling, and learning about people more than anything school has taught me. I am the type of person who learns outside of the classroom, and even though this caused my schoolwork to fall behind, I knew that my priorities were right for me and who I am as a person. Psychology gave me the ability to do what I find interesting and do it at school. It’s so ironic, and tragically fitting that it happened during the time I was in my favorite class, a class that teaches about human behavior and why one may do something like this. My hometown of Austin, Texas is very diverse and I have loved growing up here. I will be attending the University of Texas, my dream school, in a week. In fact, I am going to be studying psychology there. It will be my first time back in a classroom since the shooting. 12:11 p.m. The tardy bell just rang. We all started to take our seats and prepared to take notes, as we always do during the start of class in 4th period psychology. Then it happened. The thing we all have seen on the news, but never could imagine happening to us. Our school. A good school, in a nice neighborhood, it just didn’t feel real.   I don’t understand. I can’t comprehend why people feel the need to have semi automatic guns. If it weren’t for one AR-15, my life would not be like this. I wouldn’t be traumatized to go to school again, I wouldn’t have flashbacks of holding my classmate’s gushing bullet wounds. But no. It happened. One gunman changed the lives of more than just the people shot. The families and friends of the injured and dead, the students who were at school that day, the teachers who had to hide students in their classroom, and the parents watching the news who didn’t know if their child would come home. I live with my parents who own guns. It’s hard for me because it’s people like them who are stopping gun regulations. It feels like they would rather have guns than have their children be alive and safe. It feels like I am misheard in my own family because I have realized and tried to explain to them that none of this would have happened if it weren’t for guns. I could have died that day. Fortunately, I was one of the lucky ones who survived. However, I still, to this day have traumatic flashbacks of holding the gushing bullet wound of my classmate. Despite my efforts, my peer later passed away in the hospital, along with five other students and a teacher. And my own family still thinks it’s their right to own guns. Even though I almost died. Even though their own child, witnessed such slaughter. Even though guns have advanced so much since our founding fathers wrote the Bill of Rights, many still use the 2nd Amendment to advocate for their right to possess these weapons. I understand that people in Texas have been raised doing activities such as hunting, which require guns, however, why would one need a weapon used in wars to do this? I just can’t process how after this tragedy, people still don’t see a need for change. No teenager, child, or adult in fact, should ever have to experience what I did that day, my peers did that day, and what so many fellow Americans have experienced in recent years. I will be starting college in a week. The nervous excitement and anticipation of a new journey, but I am also scared to see how my emotions will handle the change. The fear of the unknown. How will I feel or react to being on a school campus again? Despite going to school since the age of 2 years old, one day changed the way I will always see schools. Obviously, I wish the shooting never happened, but it did, and I am still having to accept it. So many emotions. Sadness, fear, love, anger. Anger. I can’t put into words the anger I have for the man who committed this horrific act. I deserve to have a normal college experience, without the constant fear of this happening again, and so does every student.  I know that life will always throw hardships my way, however, I now know, I am strong enough to get through it. 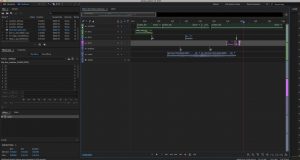 Here is a screen shot of the program, Adobe Audition, that I used to create the audio version of my story.

I created custom illustrations for this website’s headers using Adobe Illustrator. My images relate to my story because they are mostly relaxing illustrations to signify the calm after tragedy strikes and strength after overcoming life’s obstacles. 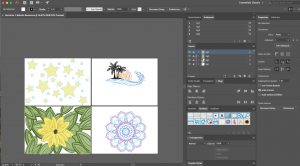 Personal Illustration:
This is my Personal Illustration. I chose to draw the Golden Gate Bridge because I was born in San Francisco and still consider it where I’m from. I am not very good at drawing by any means, so this was a struggle for me, however, I was able to finish it. 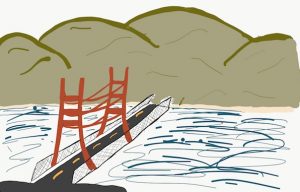 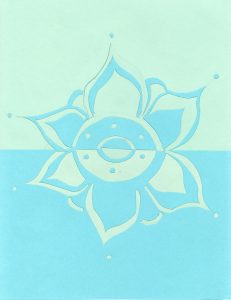 This is my product for our Positive Negative Space exercise. I valued the creativity and personal expression that we got to use for this. 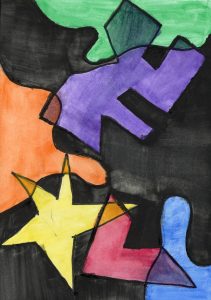 This is my product for the Blending Watercolors to Understand Neutrals lesson. I liked how we were able to see how the colors blend with something we created. 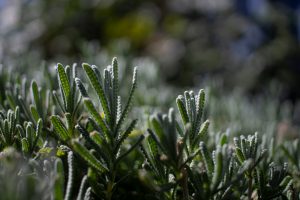 I took this picture for the Macro Nature Photography assignment. I struggled transitioning into using manual settings from previously using how to use automatic camera settings in photography classes I took before Freestyle. I really liked how you can emphasize small details of an object using the macro lens. 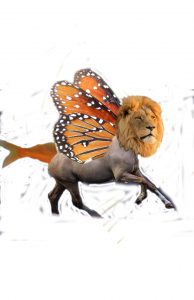 This is the creature I created for my Visual Narrative project. I valued learning how to use Adobe Photoshop to conjoin different images to create a unique character. This assignment was then used to help create our final Visual Narrative by importing our Photoshop creation into Illustrator, tracing it, and using our chosen color scheme to display our scene from our story.
Overall, I value that we were able to use our artistic skills to produce a final product that has a deeper meaning than one might realize upon first glance. I would like to thank Mrs. Parkinson for helping me through obstacles.