The narrative unit was the second one of junior year. We began to learn how to tell stories using “show not tell” In English we created a story with the guidelines of using no more then 750 words and no dialogue. This story that we created was then used in the rest of our classes where we really learned to “show, not tell”

My flash fiction is about a girl named Amber who volunteers at a senior center. She originally began volunteering just to get the hours but she realized she had built a friendship with one of the residents named Mary.  Originally I began with only Amber. Typically, I would write stories about superpowers or something out of the ordinary but I felt intrigued by simple human love. And not just a typical love story but a friendship between an ordinary girl and a sweet lonely old woman.

In design we created a hybrid based off of three traits from our main characters. We then gave them clothes and set them in scene. 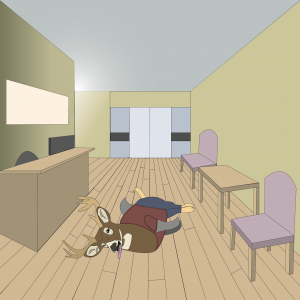 “In my English class we were told to write a flash fiction, a 750 word short story without dialogue. The story I created is based off of my main character, Amber. She is a happy-go-lucky student who loves to make people happy. When she is not at school, Amber volunteers at the local senior center. She originally began volunteering for the volunteer hours but during her frequent visits she created a connection with one of the residents, Mary. Although she has reached her required amount of volunteer hours, she continues to visit Mary everyday, often smuggling in gifts and food just to make her smile. One day, Amber was on her way to visit Mary and she had a flashback to when Mary gave her the ring that belonged to her late husband. She exits the elevator and approaches Mary’s room, only to find it vacant. As she scans the room, she finds Mary’s ring placed on the table near the window.

The illustration I created in Design required many steps to result in the final product. The instructions were to create a hybrid creature based off of Amber’s traits and use a perspective background. The entire process began by brainstorming ideas for my character and background. I learned how to create linear perspective and after producing many different versions of my interior, I finally decided to set it in the lobby of the senior center. The hybrid was created by translating Amber’s traits through a combination of three different animals. I chose a deer because Amber is anxious, a dolphin because she is selfless and, a dog because she is happy and caring. Once I finished sketching, I created the final product using Adobe Illustrator. Creating this project was a difficult but fulfilling experience and I gained a better understanding of Adobe Illustrator.”

Lastly, I created a 45 second animated short for this story. I am proud of this animation and I can’t wait to see how much I will improve in future projects.