In Animation Class, I created a 2 minute animation about a topic of my choice. I chose horse abandonment as my topic because horses are something really important to me. I hope you enjoy the video.

Not as easy as you think

I walk along a dirt path that runs alongside a street. A small brown horse follows behind me. Our destination is a small barn up a hill a few blocks away. The barn is a metal structure covered in faded chipping red paint. A middle-aged woman walks around the barn. She is solidly built with an assortment of glasses hanging off her sweatshirt. This is Deborah Goldeen. She has been my riding instructor for nearly a decade. She currently owns or takes care of 6 horses and runs a riding program called “Kids Love Horses”. This program aims to “save the world, one horse at a time.” (a quote that students who rode there came up with) all the horses at the barn where rescued from various situations, primarily abandonment. When I started researching horse abandonment I talked with Deb. “It’s more common here (in Los Altos Hills) than in San Jose. At least 10% of those horses(…) 25% never saw a  farrier, 10% never saw a person.” While those numbers seem small, on a grand scale it adds up. In the interview Deb also mentioned that outside of California she suspects the scale of horse abandonment is much worse. Horse abandonment is a major issue that’s gotten increasingly problematic. Horse abandonment is a common issue that nonequestrians should know about, especially first time buyers. Many people aren’t informed about the time, energy, monetary and emotional costs of properly taking care of horses. While I couldn’t get an exact time commitment for horses, it is an incredibly time consuming activity. This unfortunately leads to mistreatment of many horses.

The term “unwanted horse” was first coined in 2005 by the American Association of Equine Practitioners (AAEP). “The number of unwanted horses in the United States varies from year to year. In 2007,  + 58,000 horses were processed for meat in the United States, +35,000 were exported to Canada for processing, + 45,000 were exported to Mexico for processing, + 21,000 un-adoptable feral horses were kept in Bureau of Land Management (BLM) funded long-term sanctuaries, +9,000 feral horses were in the BLM adoption pipeline and an undisclosed number were abandoned.” (1) Meat processing is just one of many ways that the unwanted horse problem is handled. Another way the abandoned horses are dealt with is through horse sanctuaries and other horse-centric businesses. The goal of sanctuaries is to take the unwanted horses and restore their health to evaluate if they are ready to be resold to carefully monitored, loving homes.

One such facility is Redwings Horse Sanctuary in Lockwood, California near Santa Cruz. Sara Ruggerone, the Equine Care Supervisor, explains, “We get reports of abused or neglected horses almost weekly.  When we get reports of abuse and neglect we must notify Animal Services or the Sheriff Ag Deputy and they will go out and do a formal investigation.  Once they seize the horse then the horse can be placed at Redwings or another rescue.” Once a week may not sound too awful at first. One has to factor in that each call can have multiple horses attached to it to see how big this problem is, especially considering how important horses have been to human civilization.

Horses have had a major influence on history. They were used as the primary form of transportation before cars. While its not clear how long horse abandonments have been occurring, recently it has been increasing. In an article from The Guardian from 2012, “Thousands of horses and ponies face being abandoned or suffering from neglect as irresponsible breeding, spiralling bills, and rockbottom sale prices take their toll, according to six leading equine welfare organisations.” (James Meikle, The Guardian, ) When the value of horses and their expenses get out of alignment, it leads to many problems. For instance, “Some horse owners still believe they can make a profit from breeding but prices for live animals have dropped so far that some cannot even be sold for £5, while shelter, food and vets bills are reaching £100 a week. With UK abattoirs paying £230 for a horse or £400 for a mare and foal, raising animals for meat may be a factor for dealers trying to cash in on exports to Belgium, France and Italy, the report says.“ (4)

So what happens with all the “unwanted horses”? Some of them are being left to fend for themselves. An article from the American Veterinary Medical Association (AVMA) mentions ”Other horses may be placed in equine rescue, rehabilitation or retirement facilities. Some are euthanized by a veterinarian at the owner’s request. What happens to the others? Humane slaughter is one option. Others may end up abandoned, neglected, or abused.” (2)  One of the other ways of disposing of the horses is the previously mentioned slaughter for meat. While the ramifications of horses being slaughtered for human consumption is debated, an article from 2009 by the New York Times talks about “An estimated 100,000 horses a year are shipped to Canada and Mexico for slaughter, prompting Congress to consider a bill that would ban the sale and transport of horses for human consumption outside the country.” (5)  The price of barns (and the land they are on) is also skyrocketing, especially locally. This forces many people to either move out of the area or to have to abandon their horses.

Horse abandonment is an issue that will take a lot of involvement from people outside the horse community to really fix. The biggest step towards resolving this issue is though educating people about how much time and energy are needed to maintain horses before parents buy a horse as a gift for their child. While circumstances do sometimes arise where people have to sell horses they love, a more common situation  I’ve seen while working with KLH is younger children demanding horses without knowing much about the associated time commitment. Parents who don’t realize the commitment is a harder issue to tackle, but educating the general public about horses would reduce the numbers. When more people know about the time and energy needed there would be fewer people who would be uneducated about horses, thus leading to fewer mistreated horses.  Organizations such as KLH that provide a structured place for horse-loving kids also reduce the number of situations where parents buy horses.

Ruggerone explains, “Horses need rescuing for many different reasons. Some are not being fed enough and are very thin, some are not receiving necessary medical care for a health concern or injury.  Some horses are abandoned by their owners. Many horses are abused and being mistreated by their owners. Some have overgrown hooves, or are in need of dental care. Most of the horses that we have at Redwings were seized due to neglect and they were thin and in desperate need of hoof, medical and dental care.”

The final detail from the email interview with Red Wings that I would like to conclude with was in response to my question about horse abandonment. “In 2006, Animal Services and the Sheriff Department in San Luis Obispo County received a report of someone illegally living on a rural property and animals that were in terrible condition.  Nothing could have prepared them for what they saw when they arrived. There were two horses living on the property in dilapidated pens with no shelter and their only source of water was rainwater that had collected in dirty trash cans. They were standing mud and feces that was almost to their knees and there was no food on site. Both horses were a body score of 1, which means they were completely emaciated with no muscle or fat anywhere on their body.  The vet that arrived to assess their condition called it “a living hell” and said the horses would not have survived another day if they had not been rescued. Both horses required months of around the clock care to return them to a healthy weight. Both horses also suffered from chronic hoof problems due to years of neglect and required corrective shoes for support. Sadly, the second horse did not live very long after her rescue; she had too many health problems from years of neglect and was humanely euthanized.  Lucy recovered very well and lived happily at Redwings until she passed away in 2018.”

In conclusion, horse abandonment is a major issue that everyone, especially people who want horses should be aware of. The best way to prevent it is through people learning about horses, and that they aren’t as easy to take care of as it may seem. 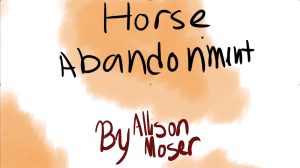 The background is supposed to be reminiscent of a paint/ pinto/ pie horse’s coat. I hand wrote the title and name to give it a bit more of a personal feeling. 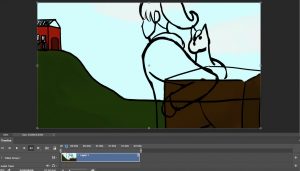 I decided to make the characters transparent to show how they aren’t in the same story book reality as the background which is bright and vivid. 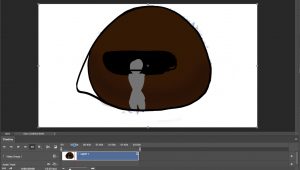 Eyes have important symbolism in art, so i had the camera focus on the horse’s eye to try to make the viewer sympathetic. From the horse’s perspective the owner just one day walks off, and the horse may never see them again. 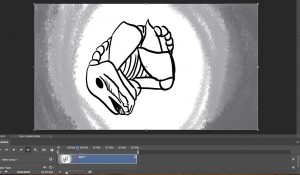 I really wanted to convey the level of decay and how grim the situation for the horses was so I did my best to make a semi-prepositional horse skeleton. Bones have an incredibly foreboding atmosphere to them, which i think is fitting to the theme of the animation. 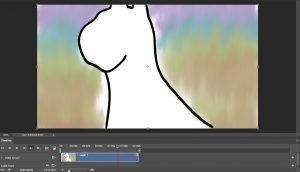 Sunrises have a hopeful feeling to them: a dawning of awareness. I wanted to present the horse looking out at the sunrise to symbolize that this is an issue that can be seen and acknowledged. 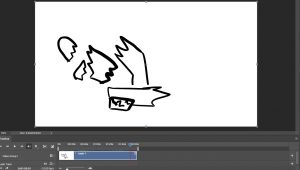 I really enjoyed drawing things are breaking apart into smaller pieces.  I also feel that it fit the audio well. 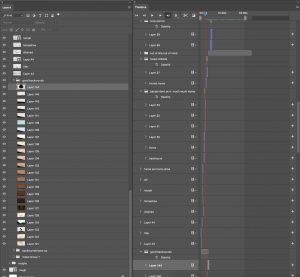 Above is a basic picture of how many layers where involved in making the animation. 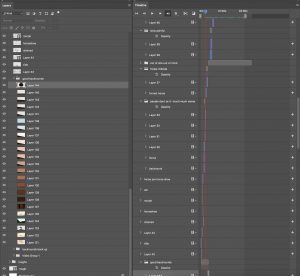 Here we see more of the layers and animations. 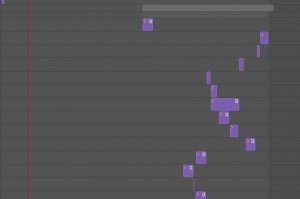 Above are some of the timelines for the animations.

The screenshots above are some of my favorite portion of the documentary. At some point I plan to revisit the animation and bring it to a more polished level.

This is the rough “planning” for the final documentary