Welcome to the narrative page. The narrative unit is the second unit at freestyle. It focuses on storytelling using visuals and audio. On this page you will find the different projects we worked on during this unit.

I don’t know why I decided to do it. Maybe it was the way the loud conversation drifted up the long flight of twisted stairs, like the shrieks of waring animals. Or maybe it was because my father had to stay at work late again, tending gingerly to the towering mountains of goods, waiting impatiently to be bought. Or maybe because I had grown tired of the monotonous pacing back and forth in the claustrophobic tan closet of a room, a space so small that if I reached each arm out I could easily touch each wall. Oppressive, like my personal prison cell.

I stared longingly at the locked window that was carved into one of the tan walls next to my bed, just large enough to slip through. I reached a thin pale hand forward, resting it on the lock that my step mother had badly tie to the window. I fidgeted with the lock until I heard a popping noise. Her latest attempt had been one of the weakest yet. I opened the window, pushing lock out of the way. A slight breeze wafted in, carrying the heavy smell of humidity touched with the faint taste of freshly cut hay. I sighed heavily, the night sky called down to me, the moon like a pale woman, surrounded by glittering jewels. the faint embers of a city slumped tiredly on the horizon. I had been there a few times, when i was very young my mother would bring me along with her on errands. But now under the tyranny of my step mother I had never been allowed out, never allowed to fly freely, forcing me to take courses online, devoid of wandering or adventure. While i did resent not having any friends, it wasn’t like i would have really been able to make any in the first place, it wouldn’t have been safe to make any.

I carefully stepped through the small window, stepping carefully onto the bottom of the sill. I placed my hands on the rough shingle roof and proceed to houist myself up. As i pulled myself up the rough incline a shingle came loose under my left hand, I started to slide back down, scraping my arms.  In a moment of panic I called forth my spirit form,it had a large gray humanoid torso, its arms were replaced by large dark gray wings covered in zebra-print-esque veins. Its large talons grabbed my arms and hoisted me up. This was my curse, bad luck always followed whenever i called upon it, a dark shadow that no one could see. Well… almost no one, i had only met one or two other people who also had a spirit of their own.

I sat back on the slanting roof, the monstrous creature watched me with its beady charcoal eyes. The roof had been one of my favorite spots to sit, it was quiet with a view. A reminder that a world existed outside of the house, an unknown place. My spirit laid down next to me, gazing intently at the sky, a silent plea to fly, to be freed from the shackles binding us down. Maybe it was mere coincidence that bad things always happened when it was around, i sat there, conflicted. On one hand i could oblige, leave the party, the prison-esque room, the house, the waiting behind but where could i go? I sighed heavily, and slowly stood up. My spirit leapt up and onto my shoulder powerfully. Whether it was the cause of bad luck or not, i was ready for change.

With a flap of its massive wings we were off. Soaring high over the ground, wind rushing past. We glided along, past cut fields of hay, high stalks of corn. Rushing past in an exhilarating blur towards the faint light far off on the horizon.

The first and primary project in the narrative unit is Story. It started in English where we were given the assignment of writing a 2-6 page story. For my story I took heavy inspiration from media that I enjoy, primarily JoJo’s Bizarre Adventure.  I love the scenes of whimsy and insanity, along with the way that the characters find creative uses for their ability. One aspect of JoJo’s that I tried to include in my story was the usage of music. In JoJo‘s original manga version there is a heavy inclusion and referencing of English alternative rock music. Mostly references are in ability name, or as they’re known in JoJo’s, stands. The names range from Killer Queen named after the iconic Queen song of the same name, to Spice Girl a reference to the band Spice Girls. The songs tie into the stand user more than the song itself. For example, in one of the previously mentioned stands, Killer Queen, the user has to go undercover, referencing the line of the song “never kept the same address”.  In the animated version of the show whenever a character calls out their stand, a musical piece that expresses an aspect of the character and their ability starts to play. So for the audio version of my story I tried to replicate the use of music to indicate a ability.

When I recorded the narrative, I tried to mix the sound effects of what the character was doing with their thoughts. My main struggle was setting audio levels correctly, as the recordings where either so loud that the story couldn’t be heard, or so quiet that it was hard to hear them. To try and balance the audio, I modified it so that it would get louder and softer as the clip played.</span > 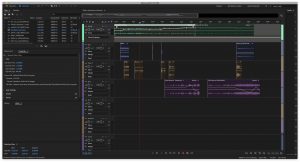 This photo is of the audio tracks for the story. 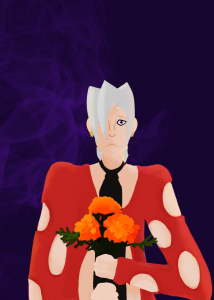 For my personal illustration I did a drawing of PannaCotta Fugo from JoJo’s Bizarre Adventure. I decided to draw him because I find him really relate-able as a character. In his short time in the story, he constantly works to help his friends. For example, he tries to teach high school math to one of his friends.  The flowers in his hands are marigolds, symbols of pain and grief. I had him holding them because in a side story focused around him (Purple Haze Feedback) he learns that his best and almost only friend died.
One of the main tasks we had to complete was creation of images for the website. I mainly used Adobe Photoshop and a bit of Adobe illustrator.
For the banners, I had to create images that both fit the projects, and would look nice only being able to see the middle of the photo. I had to make sure that since the middle was the only visible part, that  it was distinct and recognizable. For the first image at the top of the page I used Adobe illustrator. The image is of a character wearing a scarf.  The drawing consists of repeating small lines. The second image is of the main character of the story, done in a few different types of ink. The illustration sections image is of an abstract ribbon, made using the same approach as the first image’s scarf. The main difference is that this one is done in color on a black background. It was also created in illustrator. The final image is a modified screenshot from my narrative animation. The only difference is that I used Photoshop filters to make the central focus clearer. 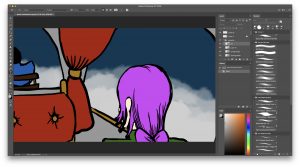 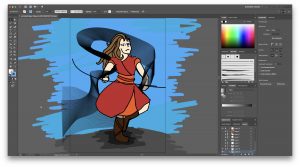 r
My main elective at freestyle is animation.  In that course we frequently complete collaborative projects. My partner and I had to make a 2 minute long animation that wordlessly told a cohesive story. The largest challenge we faced while working on the narrative animation was figuring out how to fill the 2 minute run time. Animating enough to provide 2 minutes of content is difficult since we were animating at 12 frames per second.  A single frame can sometimes take quite a while to draw, especially when any motion is involved in the background. Backgrounds have to be detailed enough that when they are not in motion they still look visually pleasing, but not so complex that they either distract the viewer from the actual focal point or are impossible to animate. To combat this I tried to have the simpler backgrounds where I knew there would be some motion, while layers that without motion were made more complex and detailed. I also used layers to my advantage, allowing motion on certain layers of the background, and intentionally chose others to be still. For example, the horses move while the character leaps into the carriage. The fence and house are on a separate layer where no motion happens. The most difficult challenge I faced with this was having too many layers.  The process reached a point where it became hard to find a specific feature. (I had about 23 layers used in the entirety of my section of the animation). My solution was to break my scenes down to actions and whether the layer was associated with a character or environment. All backgrounds were stored in one folder, while all characters (like the fox and the main character) were in a separate folder. In those directories I made sub-folders for the actions in the scenes: elements like the character in the mirror are all in one sub folder.  The character animation when the camera looked up the stairway was stored in a different folder.
^
Copyright Greenturtlelab. All rights reserved. | Powered by Greenturtlelab