The first unit of my senior year at freestyle academy was the reflections unit. It was during this unit, that I “Reflected” upon myself, who I was, and how I’ve grown both as an artist and a person. After much thought, this is my conclusion: As an artist, I’ve learned how to mold raw creativity into something real. From gaining a stronger work ethic, I have learned to set deadlines and follow through with them. I am no longer someone who is content with just an idea. I am now someone who turns ideas into reality.

During the reflections unit, one of the main things we worked on was the personal essay, an essay which could, in theory, be used for colleges. The process of creating the personal essay was just writing, then rewriting. The purpose, however, was much more interesting. To some, the personal essay was a jump start for colleges. to others, it was more about realization. Who am I? what have I come from? Where do I hope to go? these were the questions I hoped to answer in my personal essay. I think I succeeded, to an extent. There were some issues I had, mainly making it less artistic and more professional, but overall it turned out well. Sadly, I do believe that my personal essay is a little too personal for posting to the internet, or for colleges to read, so instead of presenting a recording of that, which was done in digital media class, I present a substitute.  A short blurb about stress and procrastination.

The snake in your stomach emerges from its egg tiny, and manageable. You can feel it, know its presence. Instead, you choose to ignore it, for what importance does it have. You’ll deal with it, you think to yourself. Eventually. Time passes, the snake grows, the size of one you may find in a garden. Harder to ignore, to exist alongside you feel an urgency. The snake should be dealt with, you nod to yourself. Sooner, rather than later. Oh… but it is a bit endearing isn’t it? To feel it writhing in your body. In this day and age, it is more a rite of passage than an omen. More time, the endearing nature of the snake is gone now. Pain, gnawing pain, the snake grows restless. A boa takes its prey through constriction, and you are its target. The walls close in, your mind turns against itself. Oh, why didn’t I deal with it sooner, you think. The pain unbearable, your mind screaming. No more, it’s time to end this. You raise your arm into the air and reaching down into yourself. The slimy knotted insides of your throat, the acidic rage of your stomach. Finally, you feel it deep within, the scaled devil festering within you. A moment of fear, but only a moment. The time for hesitation is long past. Gripping the beast, it begins to thrash. The nightmare made real resists against you, but there can be no falter. You must pull it out. Every inch a victory, every inch a reminder of your failure that you assure to yourself through tears will never be made again. Hours. You pull out the beast, throwing it to the floor. Like a dying fish, it writhes, gasps for air, and dies. It’s over. The creature from your procrastination dead, if only until for now.

A different section of the Reflections unit was the Perspective Piece. In digital media, we were required to record a short “rant” on a topic of our choosing. We would then edit the recording in protools, but, requiring more effort, create a short video in aftereffects. The process of using after effects was difficult at first. Learning how to actually use the program proved frustrating

Below is a screenshot of my perspective video in aftereffects. below the heart are the layers which dictate what images are going to show, at what time, and when. 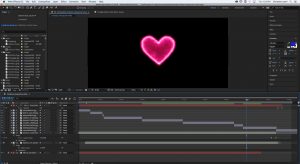 Below is a screenshot from one of my Animation projects, where I was to model an object that represented me in some way. I chose to model a Bucket with legs and a tongue, since I think I’m weird, and a bit off-putting to people. Modeling the object was simple, after learning how to extrude the faces of the object. This bucket monster started off as a simple pipe, which was one of the primitive objects we could all start with. 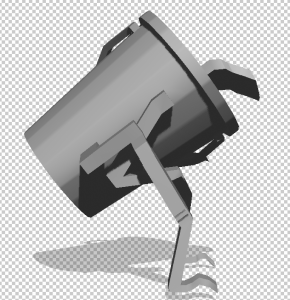