This project is without a doubt the most fun project of my Junior year. It was about learning on how to create a visual storytelling without any dialogues.  I liked this Project because that was the reason why I want to work in the movie Industry. To create an original story, and to make the audience feel attached to my main character.

This story is inspired by true events about my dog before my family adopted him. this is a story that is very close to my heart, and I am really proud with what I created

“It’s very depressing around here. I’m hearing lots of yelling from other dogs that just can’t believe what they have been through. I sit here inside an empty little cage. There are lots of rusty grey cages around me. They look like they haven’t been cleaned in the last 50 years. They contain old, filthy and injured dogs and cats inside, that have remained caged for months or even years. I just look at the only bright light on the ceiling and try to remember what happened…

I have a family in a big house. Their garden is enormous, like a party of green, with lots of holes to dig and lots of squirrels to chase. Inside the house, there are lots of toys on the floor. Best of all, I can satisfy my needs anywhere I want. It’s a dream house, the best I could imagine. The problem is that my humans always go somewhere in the morning. Sometimes the little humans go too and sometimes they do not. I find it confusing. When the big humans at home, they always shout at each other because this is a kind of game they play, I guess. But at least their food is incredible! Even though they do not give me that much, I still can have it whenever I want.

One day, the big human takes me to his mechanical cart. He doesn’t usually let me get in this, but it looks like he is going to take me for a walk. He brings me to a big park that I have never seen before, like a much more significant version than our garden. It looks like heaven. There’s shade, and water, and lots of flying plates. I think to myself that this is going to be the best day of my life. The human opens up the door at the park. I am excited like a little-energized puppy. But then… he just leaves.

I am confused. Where is my human going? Is he going to bring the rest of the family? I just decide to wait for him to return. But he never comes back. It is dark.  It is unbelievable. He has left me like I am just a piece of garbage. What can I do now? Where can I go? I walk into the park. Scared. I’m just a puppy in this big world. I’ve never felt this way before. This loneliness. I start to cry and yell when suddenly, another human wearing black catches me and puts me in a cart.

That is how I came here. To this dark room.  I have no idea how it happened. Is it me? Is it them? Is it both? I try to be the best dog there is. What does it even mean to be a good dog? When every single dog is screaming, I am the only quiet one. Until in walks another human family. One little human points at me. I am a little scared. Then I get outside the cage, and the small human holds me. What’s going on? Are they going to take me to a new house, where they will treat me like crap?  No thank you. I go rigid and refuse to move. I am a limp rag. The little human holds me carefully and smiles while he carries me as he walks outside. But I tried to resist. Inside I’m wondering if what I’ve been through will always happen to me for the rest of my life.”

My English flash fiction Story is about a dog named Twitter, who got abandoned by his owner and left in a park. A park is a place that the dog is unfamiliar with.

I started to think about the characteristics of my main character. With these traits, I searched online for some animal stereotypes that are associated with these character traits. Then I began to sketch an idea for my character. The traits include: happy like a dog, coward like a chicken, energized like a rabbit and shy like a turtle. We learned in class about linear perspective and about how to draw lines to show perspective. We had to put some linear perspective into our illustration, but I didn’t know where to fit this in, so I decided to design a cabin in the background. The most difficult part of this project was dealing with the software itself, (Adobe Illustrator) because I didn’t know how to use that software before. In my story, when there is the scene of the dog getting abandoned, the sky is grey, so I decided to give my character some winter clothes like a sweater and gloves. I decided that instead of using a park like in my story, to place my Illustration in the forest. This is because the forest is vast and it’s a metaphor of feeling like a small creature in the real world. I am very pleased with my work, and I think I did a great job.

I used pictures of animals that build my character, put them together, and recreated the parts I wanted to keep. The background was also based on a picture, But I added the trees and the house alone. 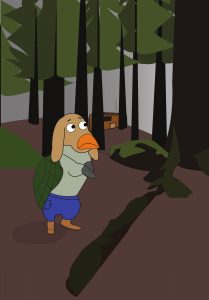 Bringing a story to life

Our first task in animation class was to design our main character and create a puppet based on the character. 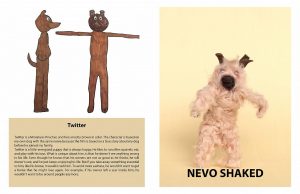 Our second task was to create a walking cycle, both with our puppet, and drawing one in a software called animate. The background was created to play with the lights and to set up the mood for the scene. (Mine starts at 1:26)

Our final task this unit was the mission I was looking forward to the most. Create a narrative animated movie, without dialogues, based on our story we wrote in english class. I worked months on this project, including a lot of changes to the scripts, and this is finally what came out: