Humor Project – If Anxiety Were a Cat

Cats are moody, and can sneak up and surprise you in an instant!  So is anxiety! Have you ever wondered what would happen if anxiety was a cat? Me neither! Not before this project at least, because it turns out cats and anxiety have a surprising amount of overlap that I milked for our English humor project. We were tasked to create a piece of comedy of our choice, and since I’m not that funny but have some sort of artistic skill, I went for a relatable comic instead. Hope you enjoy! 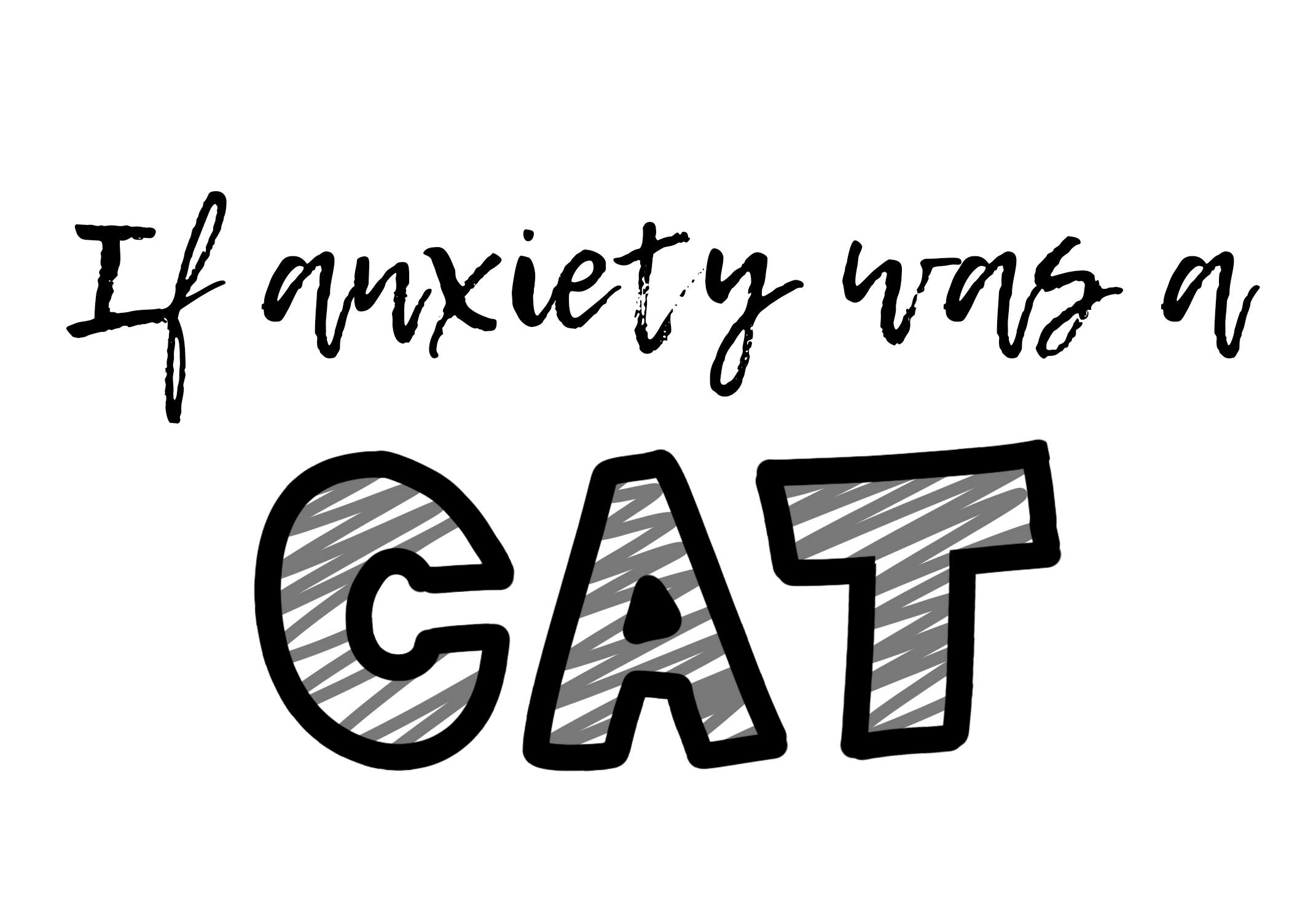 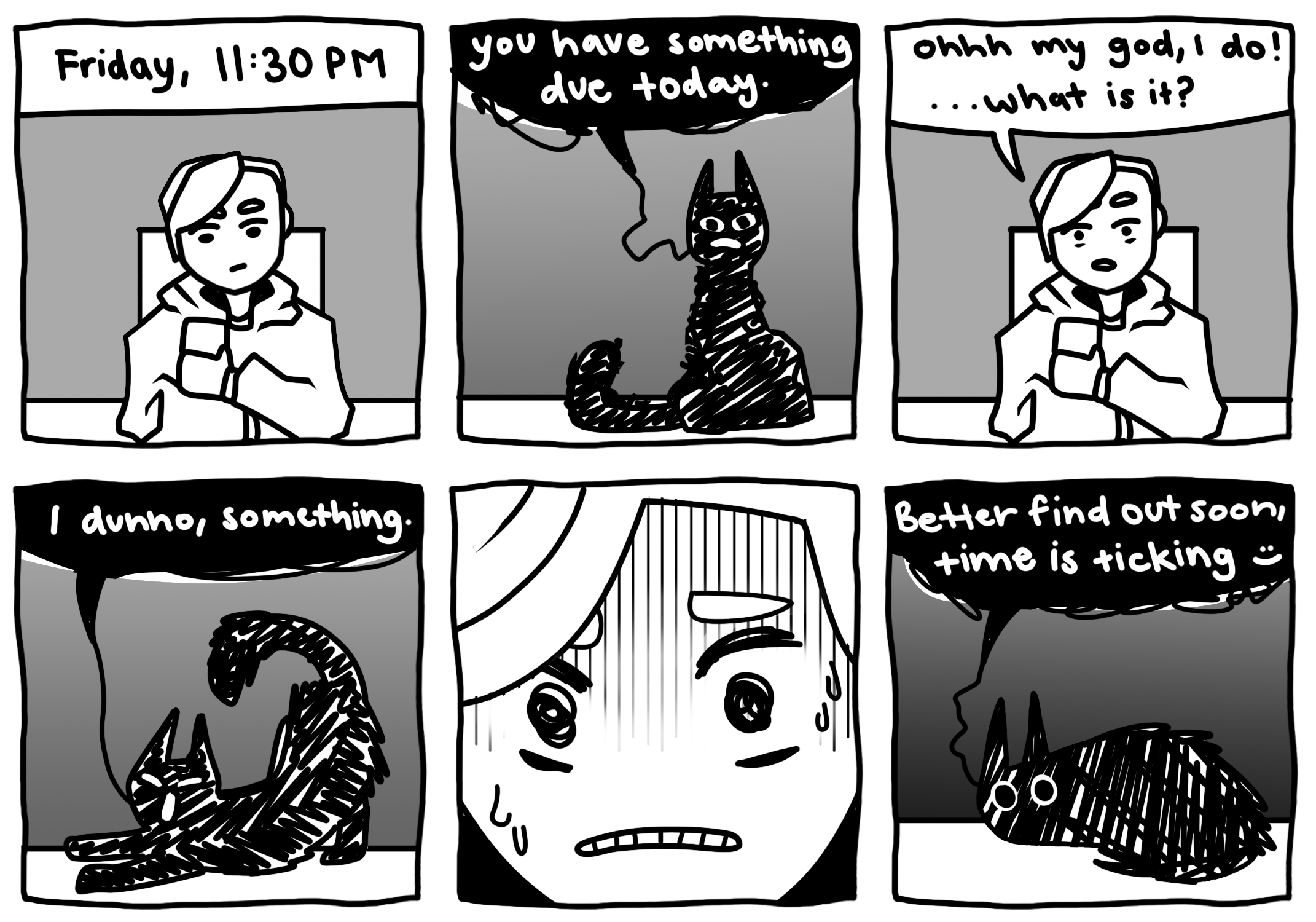 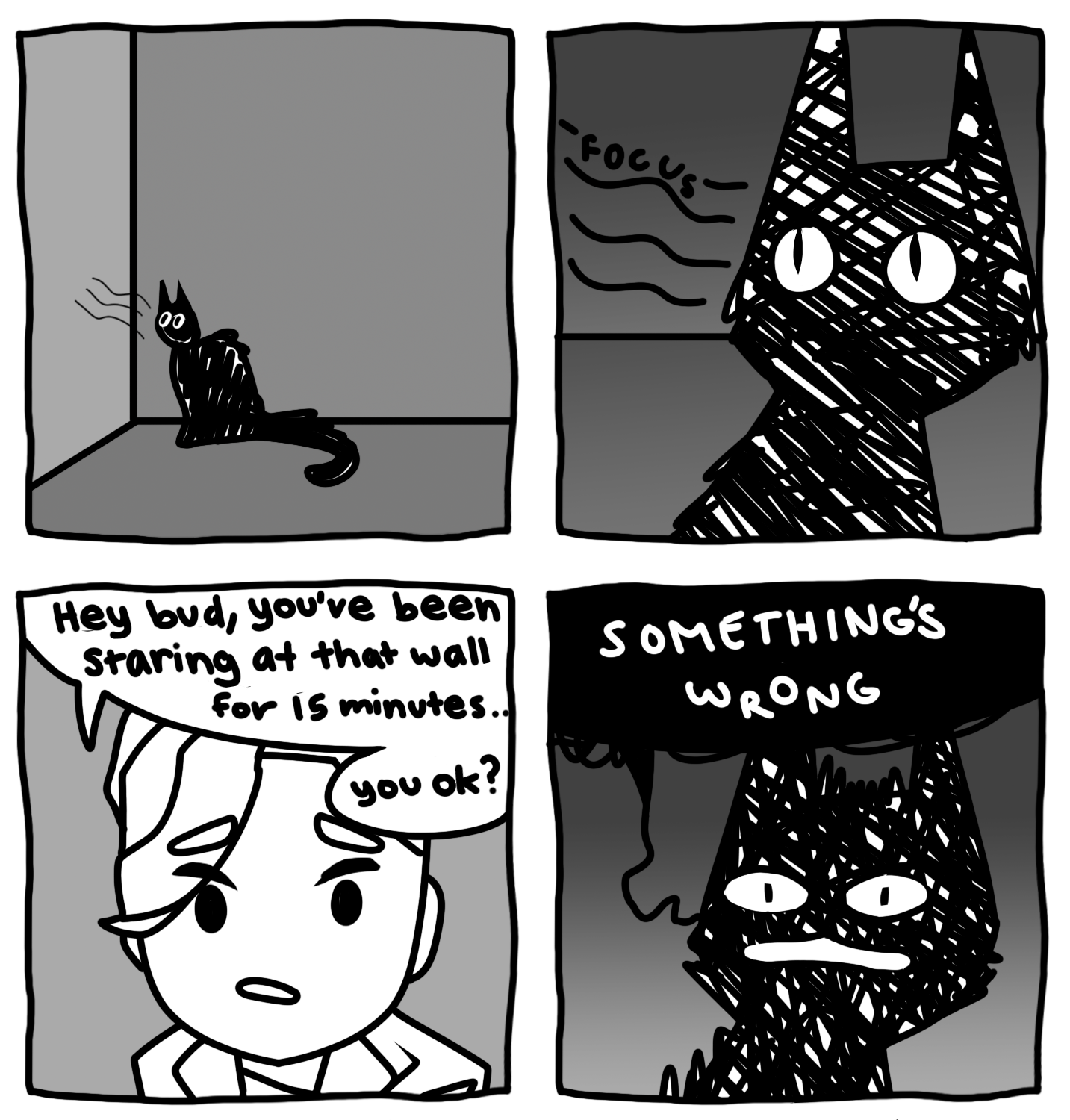 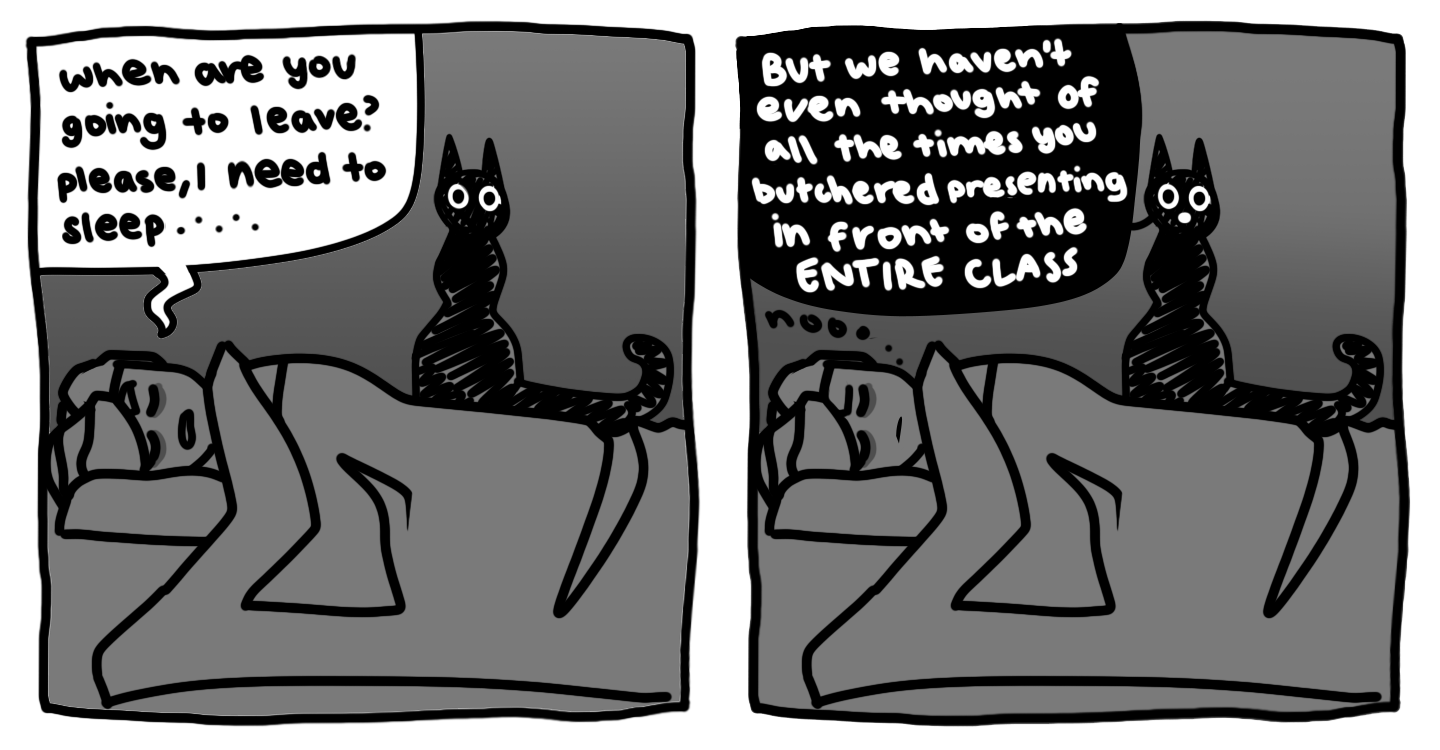 All artwork was done in photoshop with a simple round brush and lots of layers. 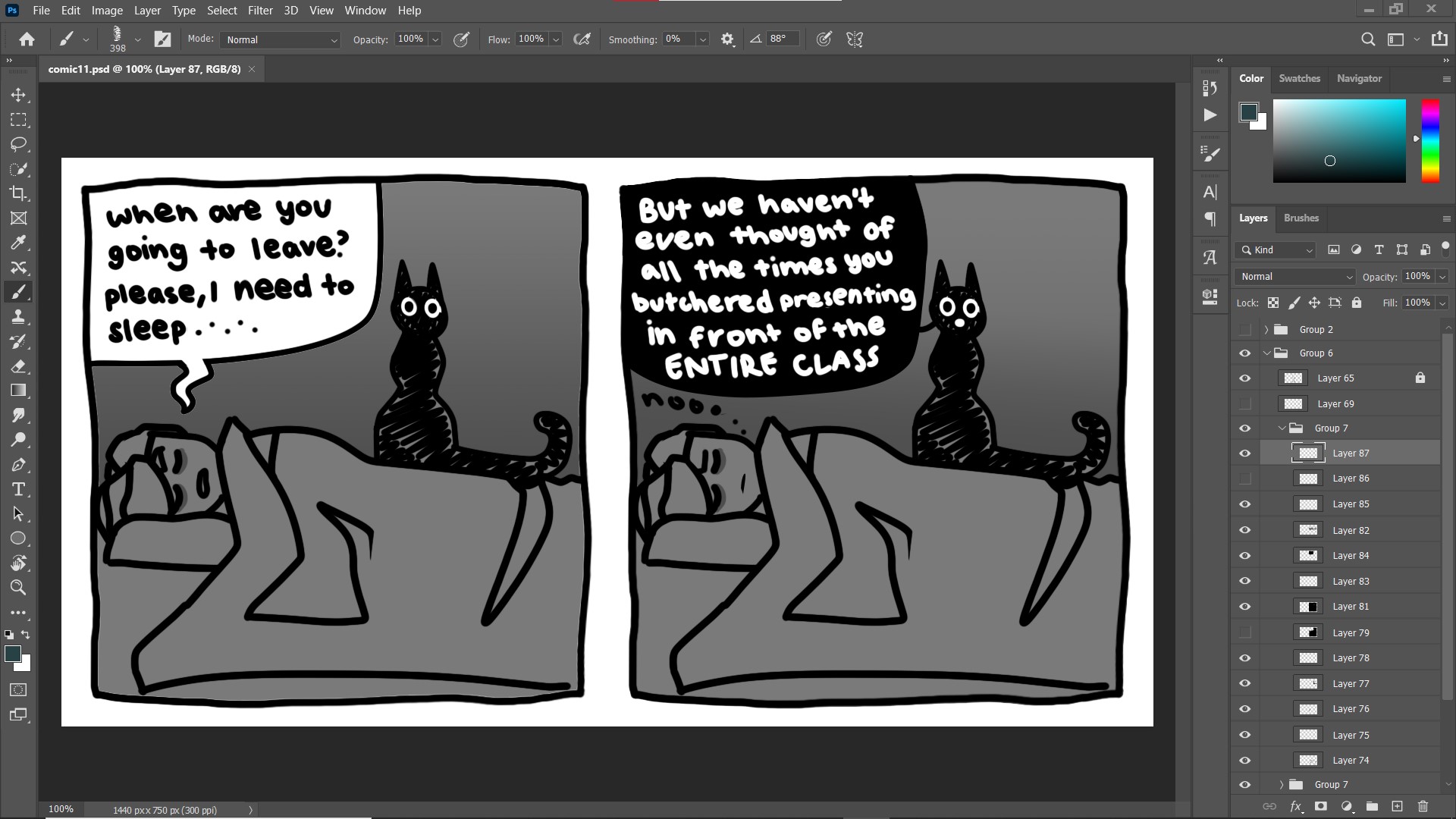 To find out about my comedic influences and why I chose what I did, listen to this video below. Transcript below.

For my Humor project, I created a series of comic strips depicting what it would be like if anxiety was a sentient cat instead of just an emotion. I did this because I thought it would be a relatable topic to teens and most people in general, and an interesting concept to draw out. Cats are strange and moody in the best way, which is why I chose a cat to be the depiction for anxiety. The humor techniques that I used in my comics mostly consisted of situational humor, triviality, and ironically, diffusing anxiety. My two main humor inspirations are Thomas Sanders and Garfield. Thomas Sanders is a youtuber & instagram comedian who depicts his different traits as people with distinct and funny personalities, kind of like  inside out. This is where I got the original idea of personalizing anxiety. Instead of using a slightly altered version of my character to be Anxiety though, I took inspiration from Garfield and made Anxiety a cat. There’s a lot of banter in the Garfield comic strips, and I feel like that type of dynamic fits well with what I had in mind for my humor project. Change Garfield’s main trait from lazy to anxiety, toss up the art style and you’ve basically got the bare bones of my comic strips. Both humorists use dialogue in an engaging way (in a straight man funny man fashion) to create comedic situations and dynamics, which I took major inspiration from and implemented into my project. Thank you for watching!