The Narrative Unit emphasizes storytelling through art, creative writing, web production, and other digital media, and challenges students to express a story in their own style. Students develop these skills with professional equipment such as:

I valued the creativity I had to implement and the tools I used to make my light cover and other projects. 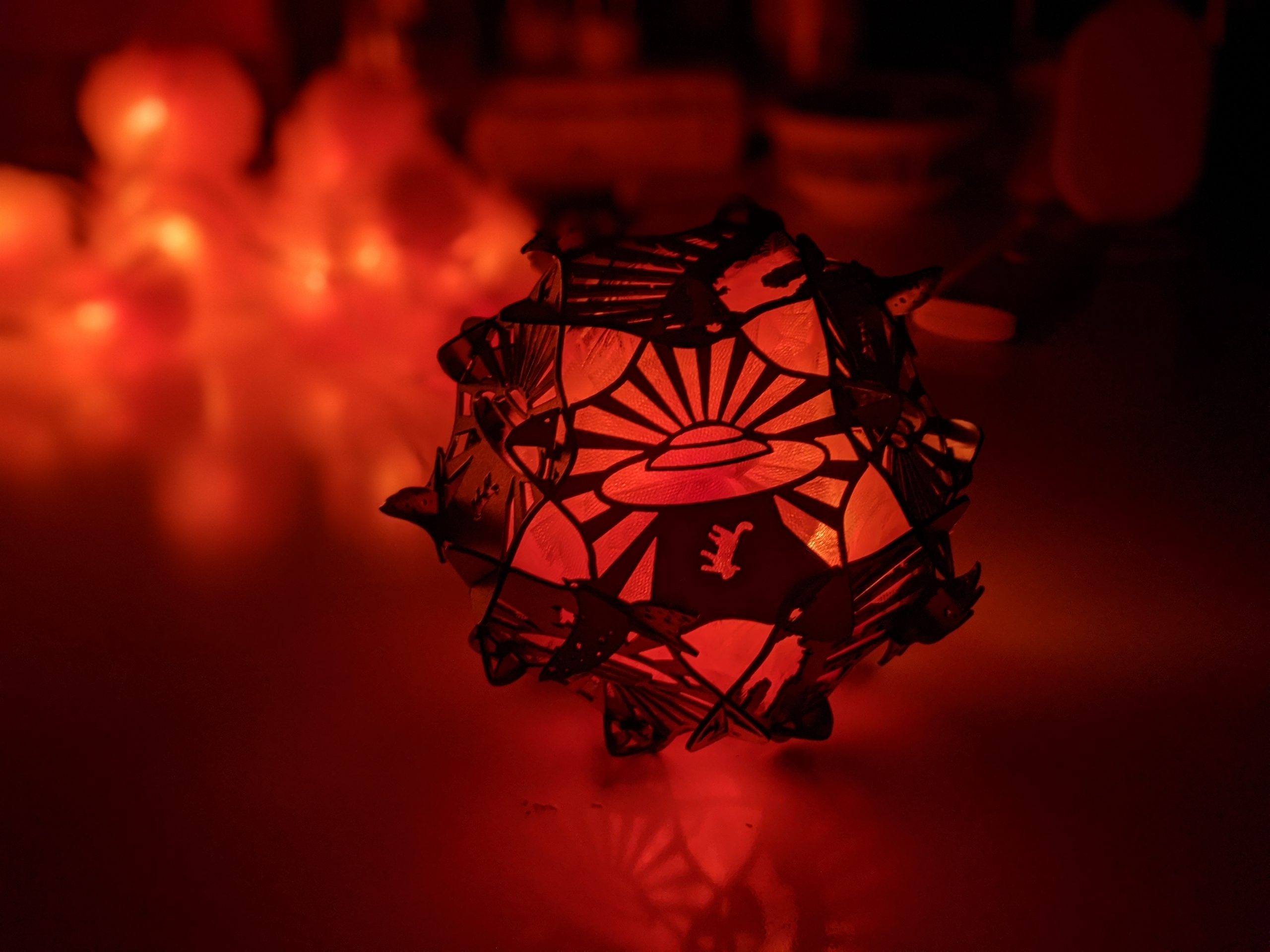 The title of my Geometric Light cover is “Lost in Thought,” which adds a deeper meaning to the otherworldly and space motifs in my design. This geometric light cover can be interpreted in two ways: literal and by the title. Space is an interesting setting and an ideal object for metaphors and deeper meaning. Rather than to try to convey a specific message though, I am trying to convey a specific atmosphere and mood with my light cover.
I am trying to convey the atmosphere and feeling of being lost in thought and curious about the various things around oneself. Space is a perfect representation of being curious and lost in thought (I would argue almost being overwhelmed with these emotions) because space is one enormous unknown. People are afraid of and pulled towards the unknown, because as the word itself indicates, we do not know everything about it. Space is completely alien and foreign, and that vastness can cause one to feel lost as people start to ask questions they can’t answer. To balance out these serious themes I chose to portray a cat being abducted by a UFO to add a bit of humor to my piece.
I learned many valuable things while making my geometric light cover. During the process I learned how to manipulate Illustrator to fit what I wanted to do. I watched tutorials to help me with Illustrator and while watching one I discovered the ‘Merge Shape’ tool. Instead of wasting time on manually adding anchors and deleting segments of lines to combine shapes of my light cover I could just click on the two objects I wanted to connect and Illustrator would do the rest of the work for me. Although this was not the only tool I used and the only challenge I faced, the ‘Merge Shape’ tool helped me by making my workflow faster, less frustrating, and more efficient. This is why I value this project, as without creating the Geometric Light Cover I would not have found ways to be better at illustrator. 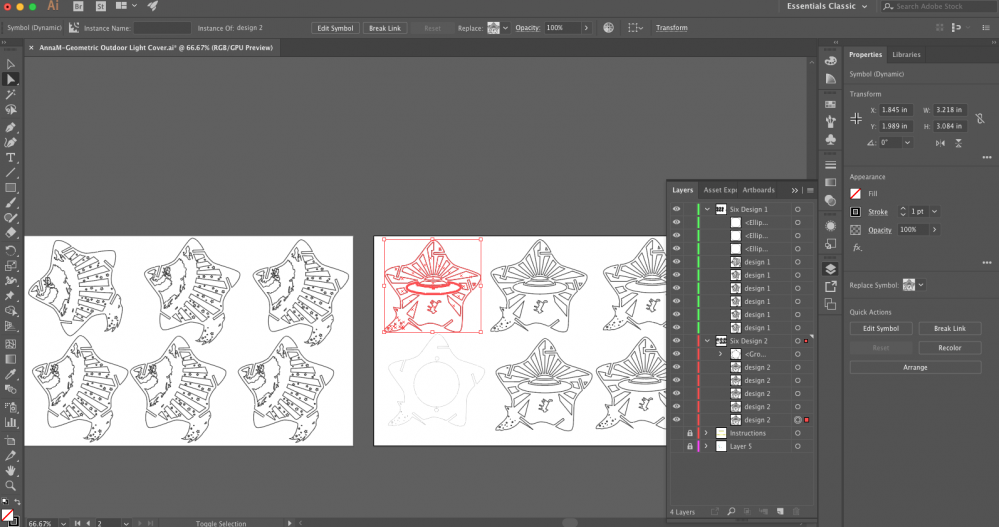 Creating my light cover with Illustrator

During this project, we applied our previous illustrator knowledge to create a design of our choosing, me choosing a T-shirt design! 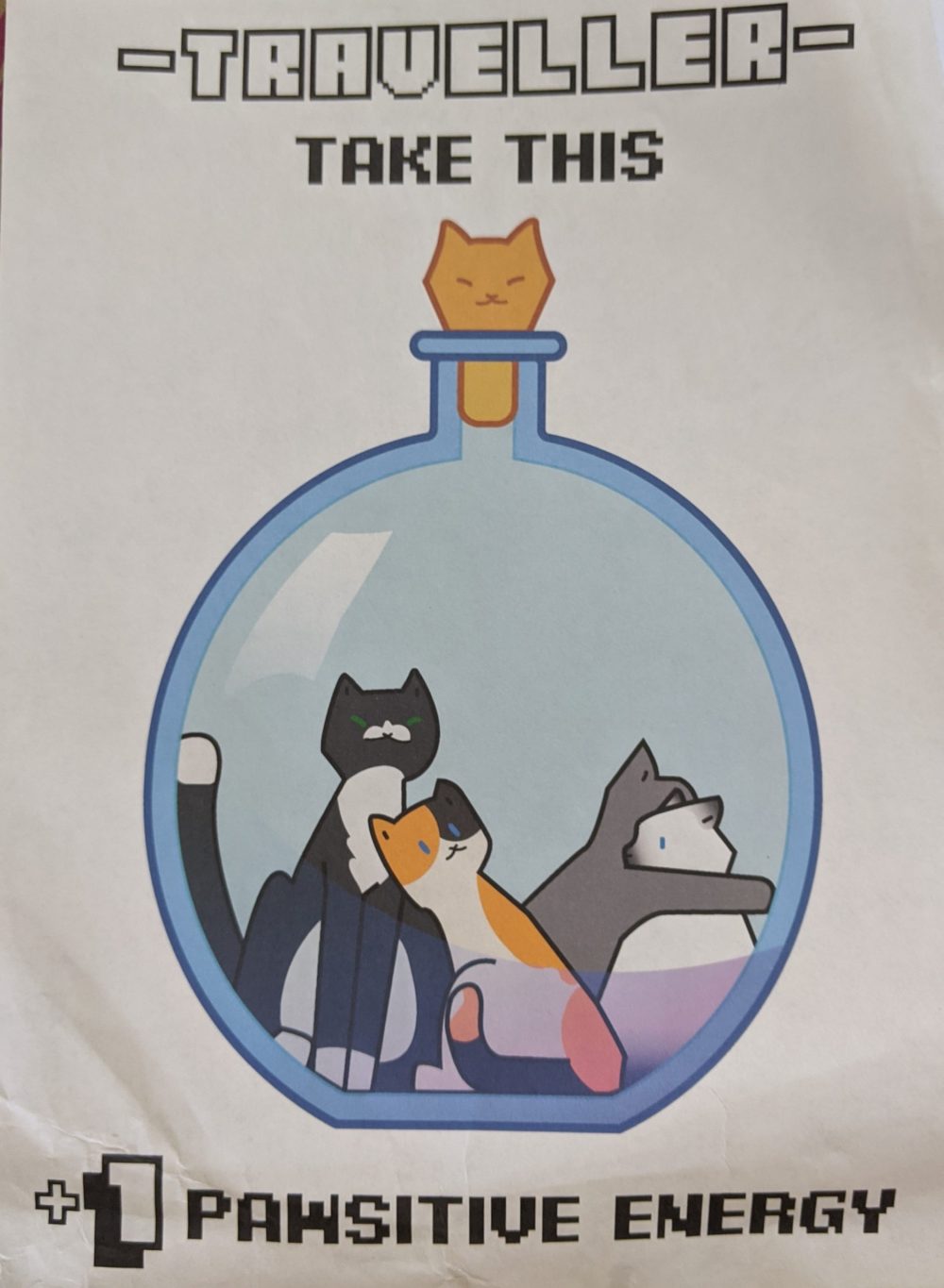 For this project, my original idea was to create a shirt with a cheesy pun. I didn’t know exactly what pun it would be yet, and spent a while brainstorming what I could put on a shirt and went from there. I decided I wanted to put something more than words on my shirt, so I brainstormed my interests and landed on a general list. My list included: Video games, cats, the fantasy genre, D&D and more. After thinking about it for a while, I decided I’d want to focus on two things: Cats and video games. Initially I tried thinking of a pun about video games, but I didn’t want my shirt to be geared towards a specific game but rather video games in general. This left me with the option of making a pun to do with cats, which isn’t difficult at all. I then knew I wanted to incorporate the pun “Pawsitive” in my shirt but I wasn’t sure how to do it. Contemplating my choices I decided on cats in a potion bottle charm and the writing +1 pawsitive energy on the bottom.
I learned a multitude of things from this project, namely how to use clipping masks. I’m still not completely comfortable using them but I have a vague understanding of how to use them to shade pieces in illustrator that I make in the future. I learned how to shrink objects around the center and not only one corner, which helped me create a potion bottle outline perfectly fitted to the inside glass plane of the bottle. The hardest part of the entire project would be coloring. Due to some objects in my art being brush strokes, I couldn’t convert them to live paint as it’d ruin the shape of the brush strokes. I ended up having to rearrange a multitude of lines and groups to color the line-art so that nothing would overlap something it wasn’t supposed to. The coloring turned out consistent and I am happy with the result, however I want to find if there is a more efficient way of coloring in the future. 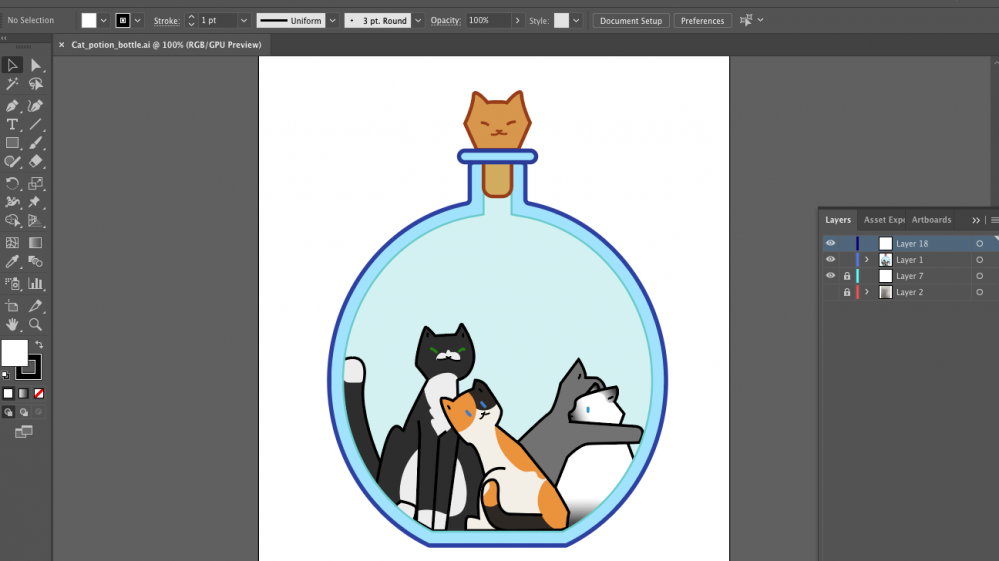 Creating my t-shirt design with Illustrator 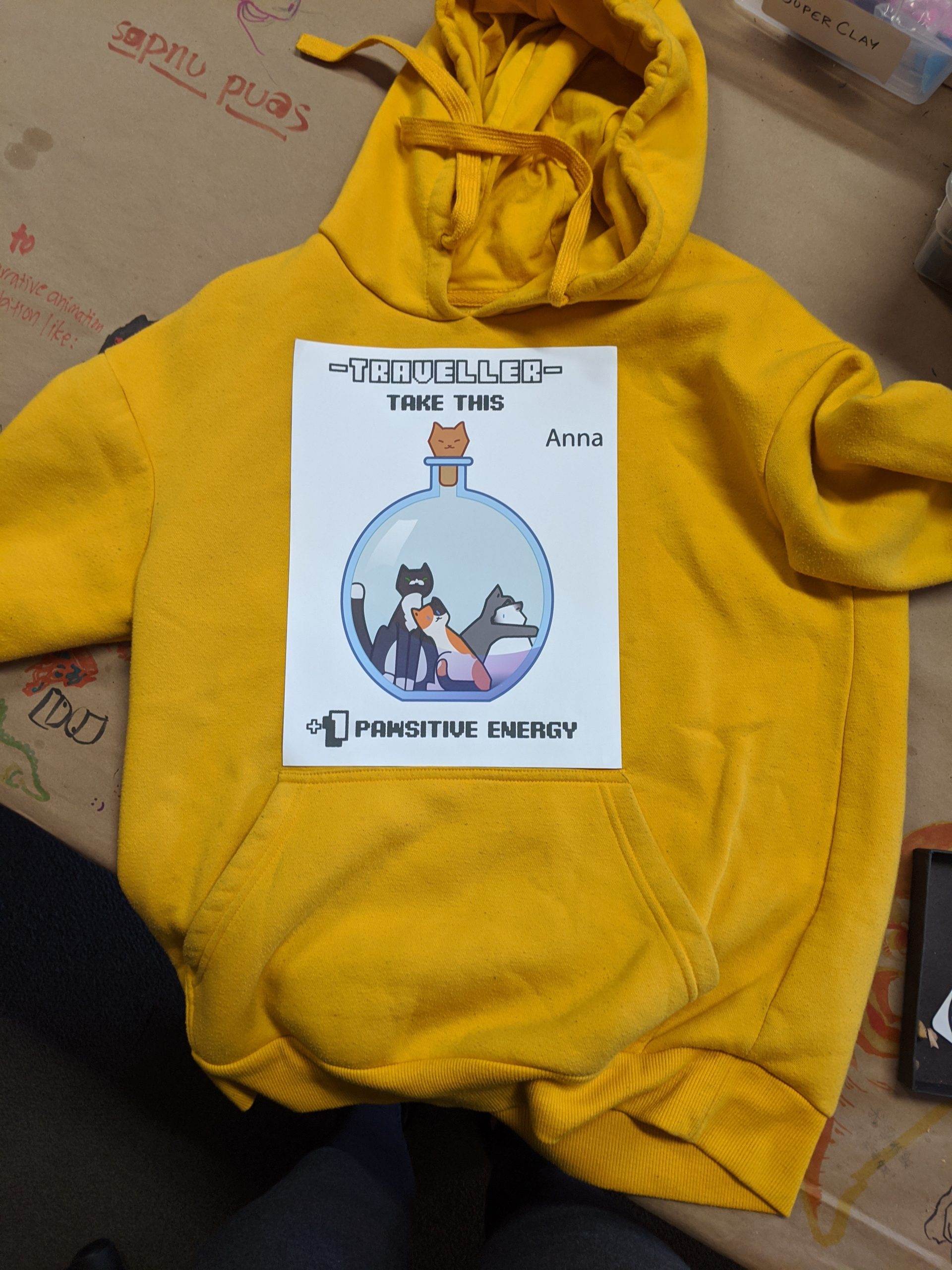 The short story assignment was originally assigned in English, but manipulating it by creating an audio visual recording was done in Digital Media. Here are my process photos followed by the final product. We were challenged to create a narrative and then edit it in Pro Tools with sound effects to create an immersive audiobook experience. Hope you enjoy! 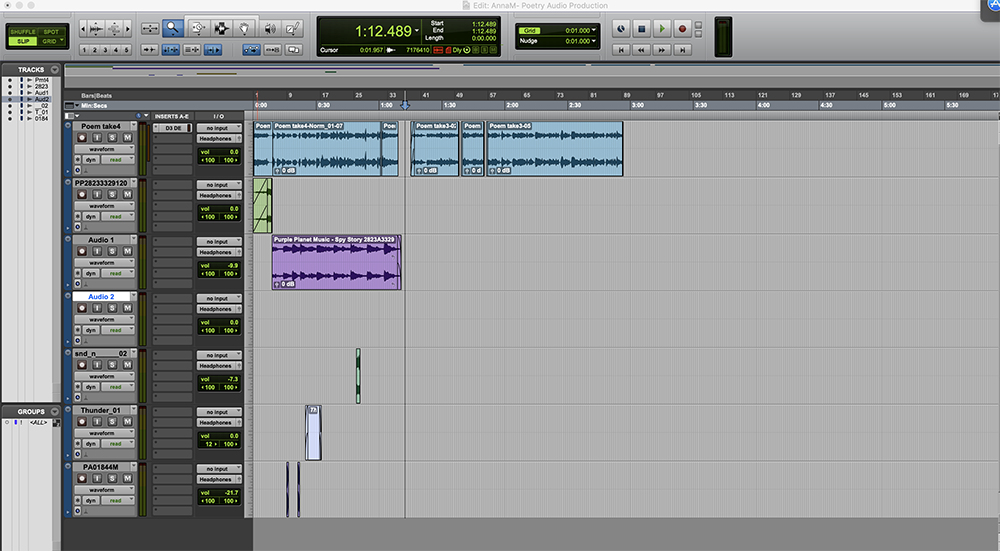 Editing my audio with Pro Tools