One of the first projects we had was the music score. We used Pro Tools and Reason for this project, using a method that would allow us to run Reason in Pro Tools, so we could cross-edit with the virtual instruments in Reason. Before we would use these tools to just make really short pieces of music, experimenting with the instruments, but now we had to make a full song. This unit had an emphasis on music found in films and TV shows, where the music can give a scene of its emotional impact, but we had the option of either making music that would replace a score in a movie/show, or just make a normal song, but we needed at least 90 seconds of music made. We had to use the virtual instruments, as well as at least 2 live recordings with either an actual instrument or your voice. My song is a mix of piano, drums, and guitar, with the piano and drums as the virtual instruments, and using a guitar to make 2 recordings, those being an accompanying melody and a base. To be honest, I did not like this project. Despite knowing how to play an instrument, I have no skill in making music in any way and making it just wasn’t fun for me. You can listen to the song if you want, it’s just that I wouldn’t.

Right after we made the music score, we started with coding, which we did on Adobe Dreamweaver. We used Dreamweaver to edit a page on our websites, that being the Narrative 1 page, and make it more stylish. This time, we made an entirely new page using the program. We primarily used jQuery, which is a simpler form of JavaScript. We learned a lot of different coding commands, such as zooming, fading, transitions, if statements, click functions, hover functions, and many more. We would then use these commands to work on our project, which was the landing page for our websites. We coded the front page of our websites using jQuery. I made the opening page you see with my name scrolling across the screen with a music play button. The learning was a bit tedious, as to be expected with coding, but it had some interesting functions, and the project itself was pretty fun.

The goal of the project was to make a landing page that had your name, which upon clicking would lead to your website and a play button that would play a song from your choice. From the get-go, I thought that only having 1 song wasn’t enough, since there were so many songs that I liked to choose from. I went in with a plan to have a list of songs for the play button to choose from when clicking. I started with 10 songs, which eventually led to 20 songs, and then it got out of hand, and then I ended up with 50 songs. These are all songs that come from bands, movies, TV shows, and video games I like, like AC/DC, Rocky, Sonic, Jojo’s Bizzare Adventure, Spongebob, Acceleracers, and any more. There is also a Georgian song on the list that I really like. The code I wrote would take this list of songs that I had and randomly pick between them. I assigned each song a number from 1 to 50 using a switch statement, so that every time you’d refresh the page, the page would pick one of those numbers at random, and whichever number is picked has its corresponding song loaded and played. The background image is a picture I took at Tbilisi, Georgia in 2019.

Here are some screenshots I took of the Dreamweaver interface: 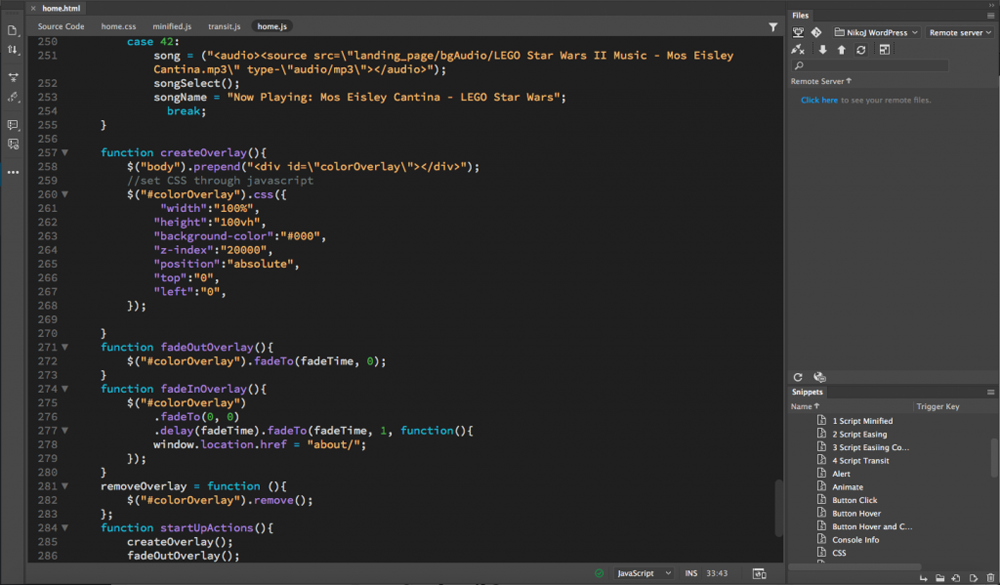 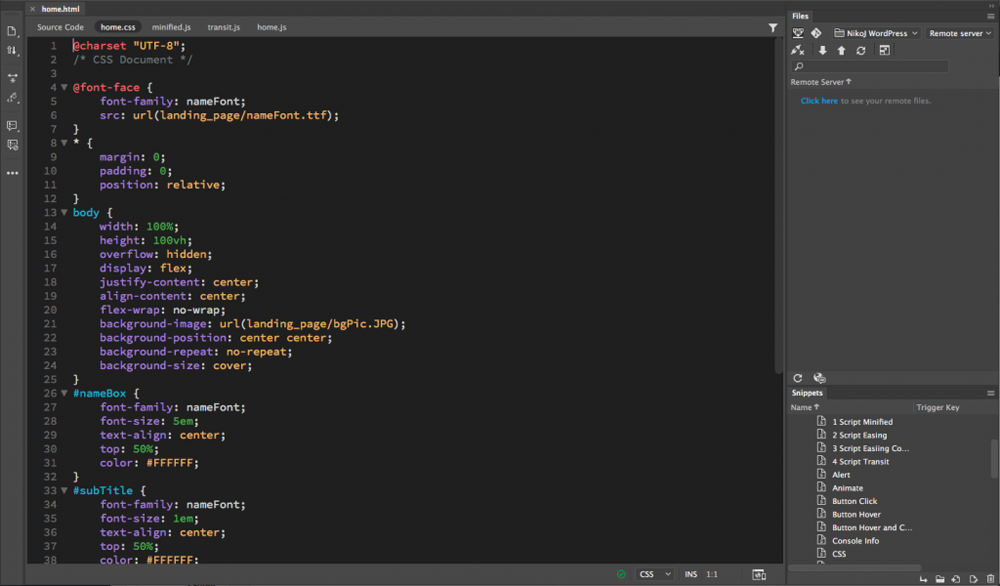 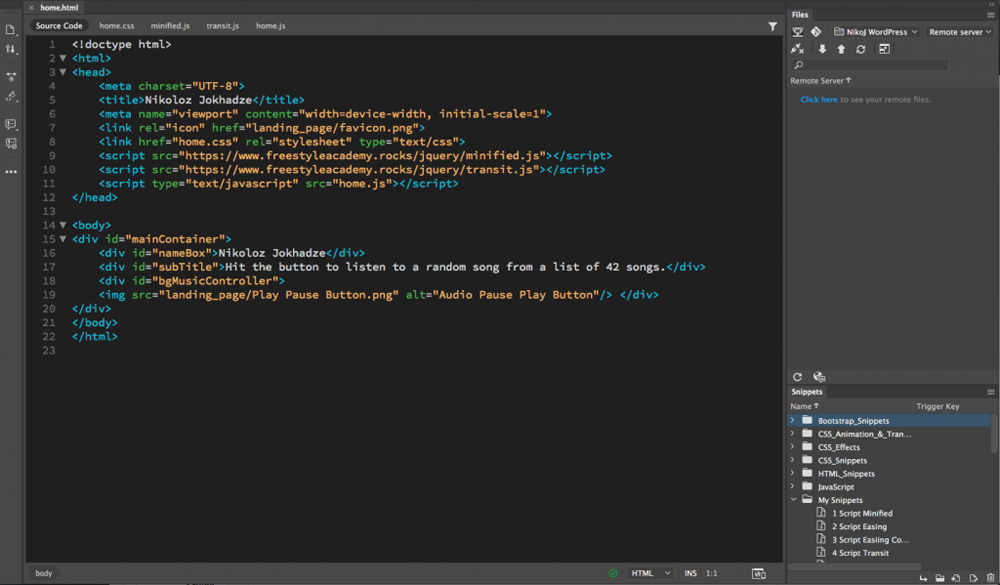 After coding, we went back to Illustrator for the 37th time and started the Multi-Layered Art Project. This was a collaborative project, where we had to have only 1 partner, and we would make 3D art. This project involved a laser cutter, and many layers of drawings being cut and stacked together to create the illusion of a 3D space. There were 3 options when it came to deciding how we would make the art: a lightbox using paper layers, a stack of wood cutouts, and an array of circles with woodcuts on the inside. I worked with Spencer Cook, and we decided to do the wood stack. The theme we went with was on tabletop games, which included a multitude of games, such as Chess, UNO, Poker, Battleship, Blokus, and more. We also had a chessboard as the main pattern in the middle of the piece, and a border that resembles a chessboard pattern on the outside. With this stack, we tried to create the illusion of many game pieces exploding out of a chessboard towards you.

We first started with some very rough sketches: 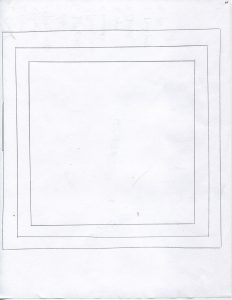 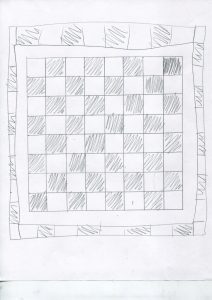 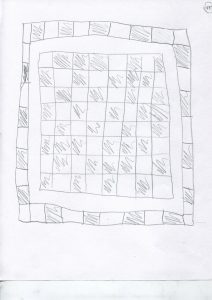 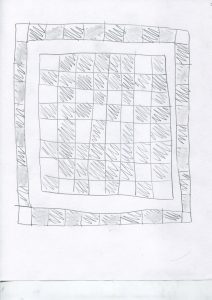 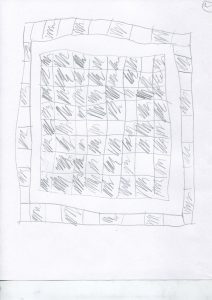 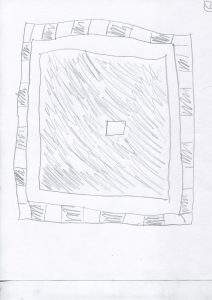 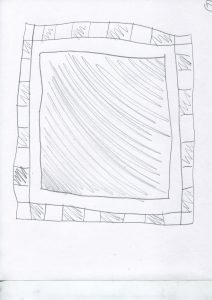 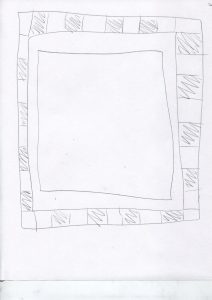 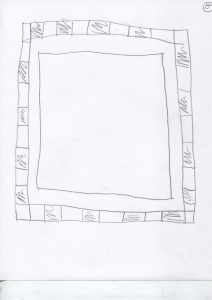 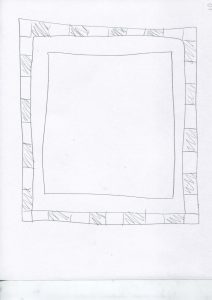 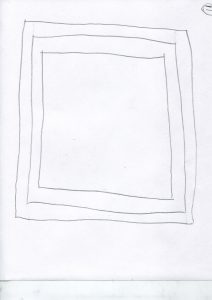 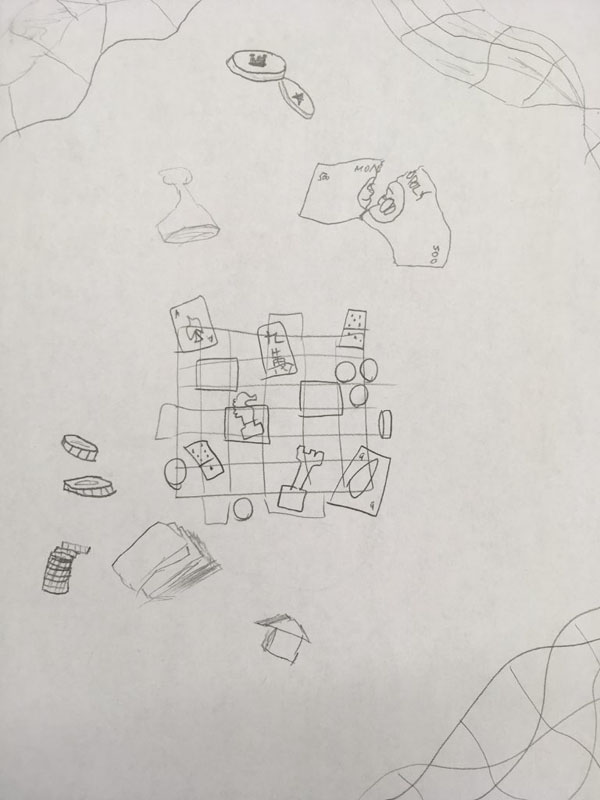 Here’s our original concept of this project, which included a couple of monopoly pieces, which we eventually scrapped.

We then got to work on the art piece: which eventually looked like this on Illustrator when all the layers were visible: 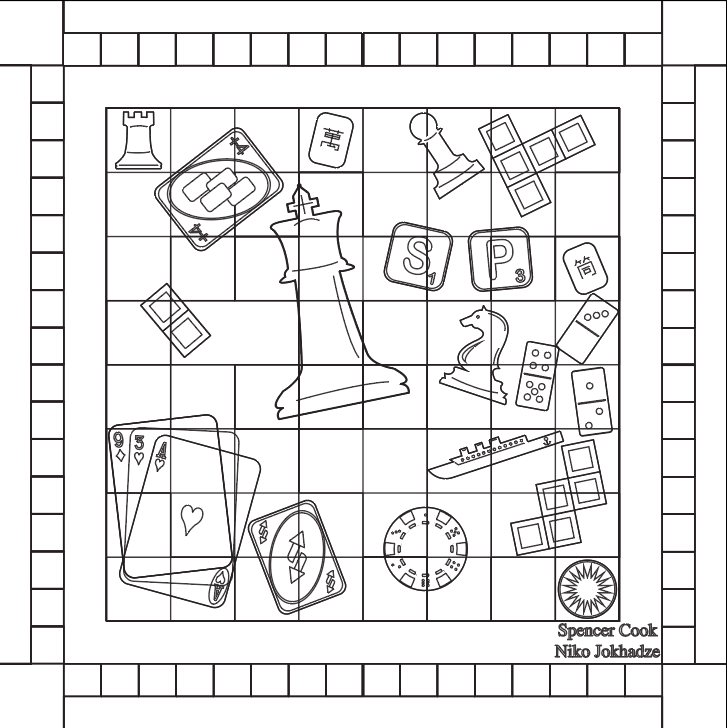 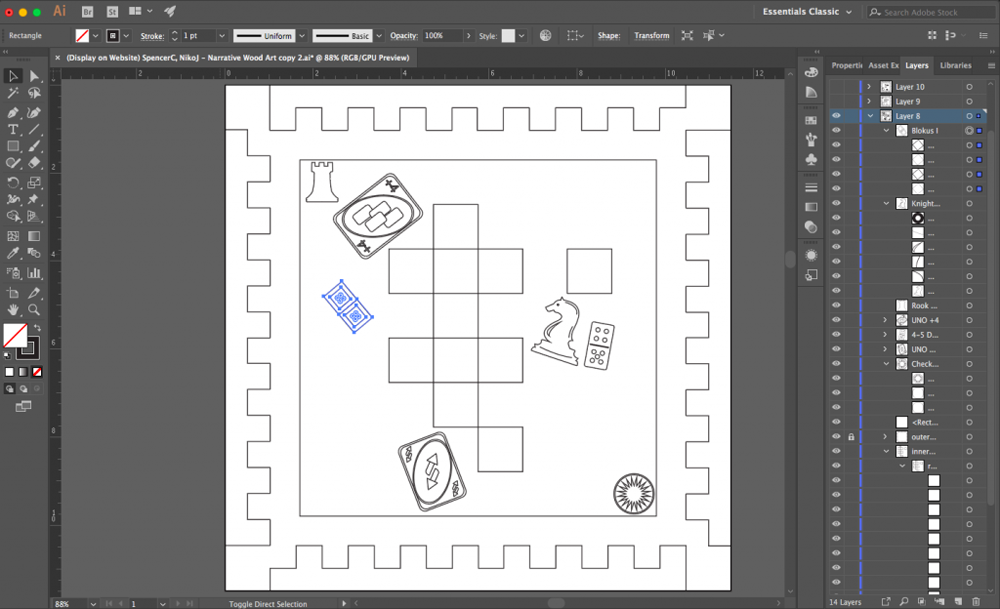 This is what the editing for the art looked like. There were 12 layers made in total, each with their own pieces and patterns, but they all ultimately kept the same look.

And the once we got our cut pieces, this is what it looked like in real life: 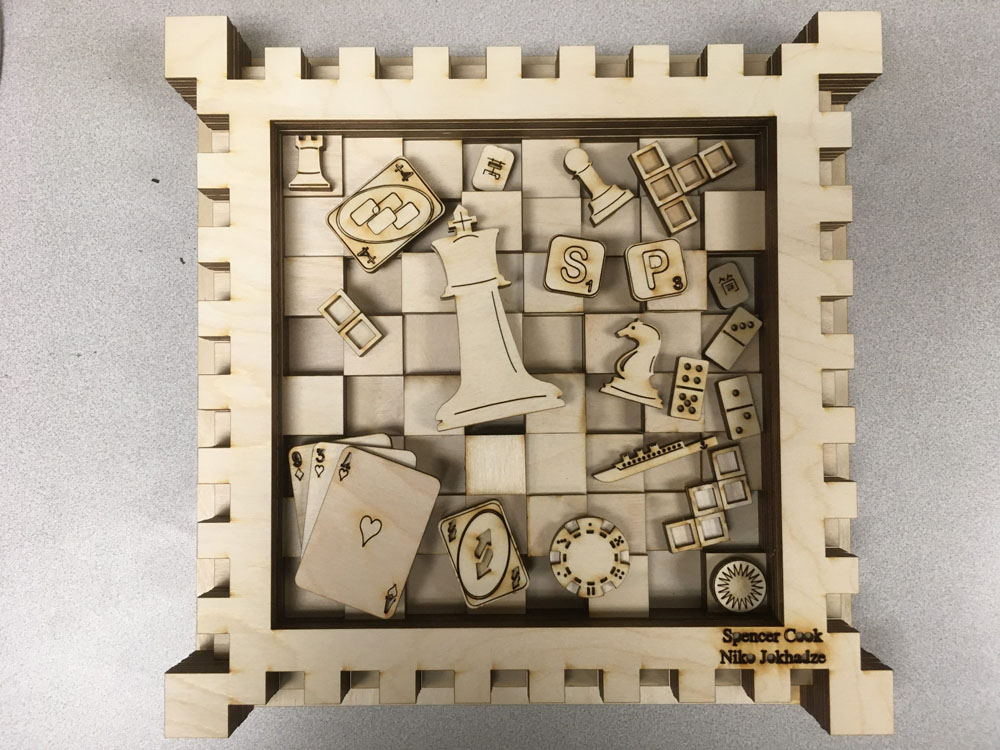 This art piece tries to convey a message about the variety of different tabletop games. There were so many to choose from when deciding what to put onto the art. When starting, our inspiration was chess, and we started off with a chess theme. Both my partner and I favored a more mathematical and angled approach to this art, rather than something very abstract, considering our lacking art skills. With chess, we then expanded to include many other game pieces, whilst keeping with the chess theme by having the main board be basically a chessboard.

What I valued about this project was just how much you could get done with a partner, and how your ideas can bounce between you and your partner to make something cool. We definitely had some differing ideas on the art piece when starting, but we then came to a consensus and decided on this theme. I think we did a good job.

The amount of detailing that went into this project also intrigued me. We wanted our squares, our game pieces, our patterns, everything to be as calculated and as precise as possible. Making the main chessboard with varying heights was very difficult on its own, and while Spencer took care of a big portion of that pattern, we still had to go back and make sure everything was arranged in the best way possible, so that when it came to assembly, we could actually make something that resembled a chessboard. Making the game pieces was pretty fun, as well as for deciding where each one would be placed relative to each other, so you could see each and every piece, and some of the fine details, since the laser cutter did a very good job printing out what we wanted. Overall, this was definitely a good project. While tiring, it was also very rewarding.