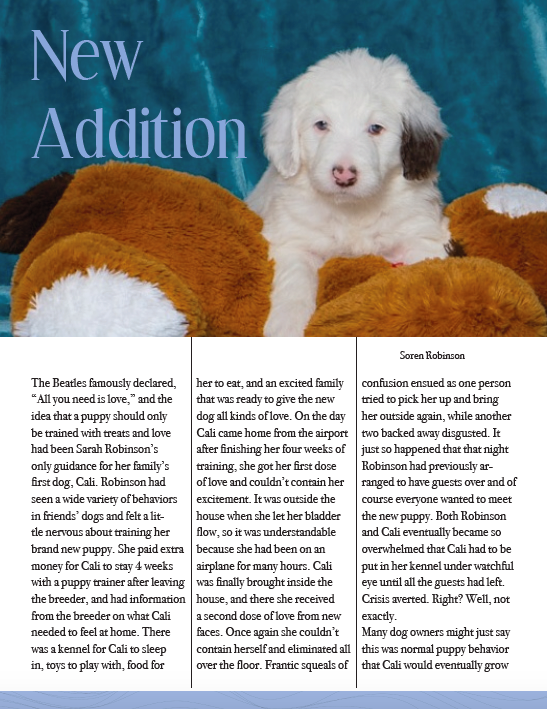 This page is a stage for the two projects I am most proud of.

This poster is based off of a fictional story I created. The main character is a scientist on Mars that gets mutated into a half human-half alien through one of his experiments with extraterrestrials. He is physically changed into this imposing monster, but keeps the human brain and memories. He is then labeled as a threat and outcast to life on Mars. With the inability to speak, the “abomination” is challenged to adapt to all of his physical changes, environmental changes, while the human colony tries to hunt him. This poster showcases all of the different parts of the abomination while still hinting back at the human roots with some of its human features.

I created this poster in Photoshop. Originally, I had planned to use compositional techniques to create the creature and scene out of only pictures that had been spliced together. This was shut down, as I wasn’t able to get the photos that I needed, so I decided to do a mix of painting and compositing. This technique is commonly referred to as photo-bashing. I used a Wacom tablet and stylus as my paintbrush to bring everything together. I used this project as a way to push my abilities in Photoshop, and I believe I was pretty successful as what I was trying to accomplish.

My idea for how my Documentary Product would turn out in the beginning was very different to how it actually ended up being. I had to change my topic a total of three times. The first idea was a dud to begin with. I was going to interview a Ukulele shop that was in my area, but I never got a reliable response from them. After about one and a half weeks of trying I gave up on that and moved onto a different idea. This one was very different from the other idea because I wanted to profile a basketball trainer that had helped me improve my game as well as many many others. The logistics were going to be tricky because he had just moved away to San Diego, but I realized that I could get the photos I needed if I just visit him over Spring Break. It was at this point when I had everything figured out and ready to go that we were put under a Shelter in Place order due to Covid-19. I was devastated because I wouldn’t be able to take the trip I desperately needed in order to get enough pictures.

With all that in mind, I changed my topic once again to a home-based project that is centered around my six month old dog Cali. We were just in the stages of training her, and I thought, “What could be better than making a project about everything we were screwing up in training our dog?” Thats what I settled on and I put my heart and soul into finishing it. Through this project I was able to realize that I can adapt to change. It definitely wasn’t the smoothest ride of my life, but looking back I can pat myself on the back knowing that I did this thing that was super hard when it was just thrust in my face.

The paper itself is a documentary that follows how my family, but most importantly my mom, made mistakes with our puppy. There was a lot that we were doing wrong, and throughout, we were able to change put ourselves on the right track. I interviewed the dog trainer for our puppy, as well as my mom, and a family friend who has had a dog in her life since she was young. This project was easily the most difficult assignment I’ve ever had to do. I am so glad that I was able to finish it and for it to turn out as well as it did.