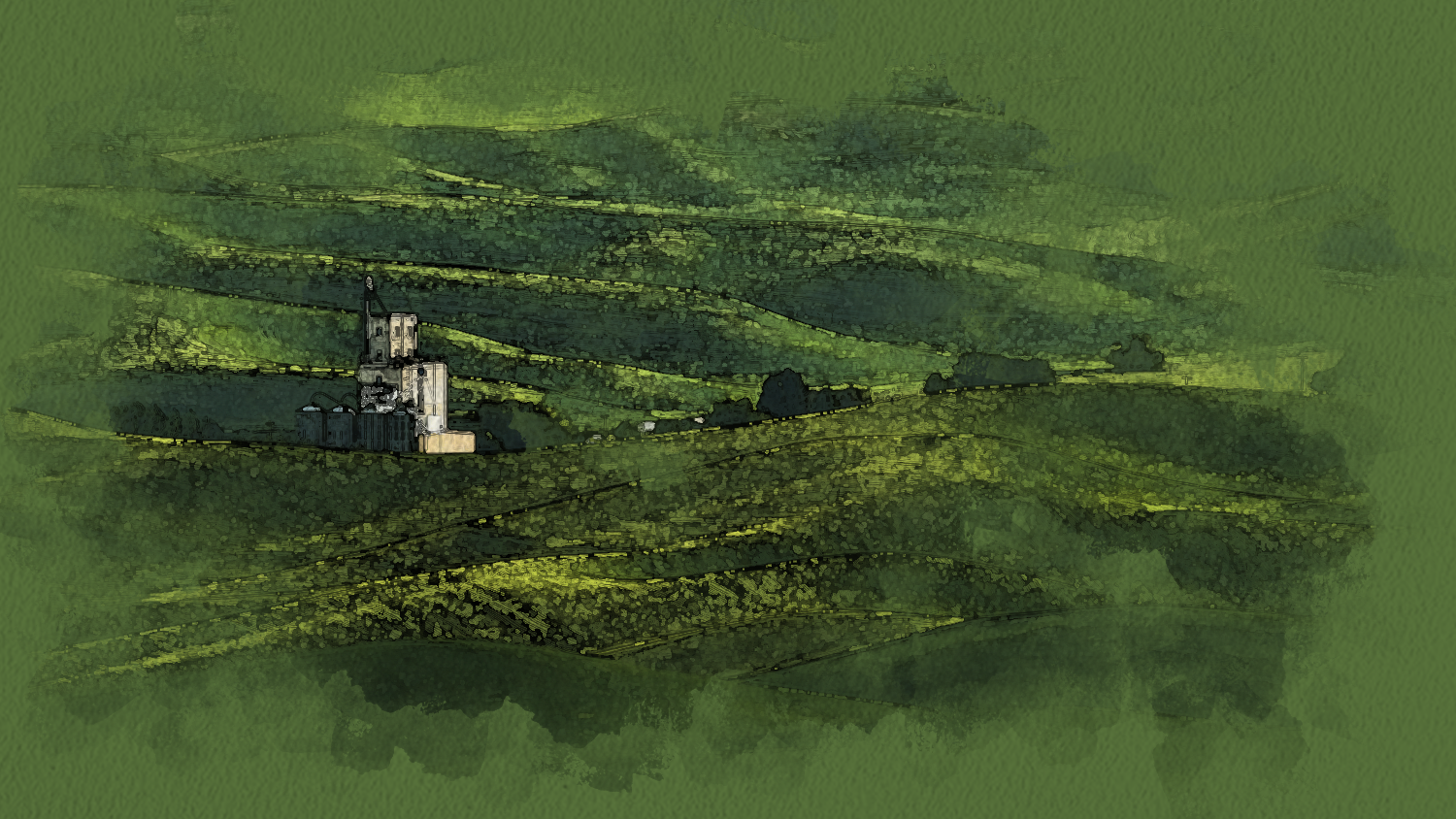 The overarching goal for the unit was to find out who I am. In both Design and in Digital Media, I used Adobe Illustrator to create a Mandala and PSA. For design I also used physical mediums to make sure I was spending time away from the screen. In Digital Media, I gained more understand of how to use Photoshop to create compositions and surreal pieces. This unit helped me appreciate find out the things that I valued in my life.

In this project, we were challenged to build a mandala using Adobe Illustrator, Because I hadn’t gotten my Wacom Tablet, I had to draw everything with a mouse. This meant that there wasn’t any pressure sensitivity for my brush strokes. At first it was very difficult to do this project because I was fighting against this restriction. However, I decided to just go with a cartoony feel and felt inspired to do something about the environment because I had just rewatched and read the Lorax.

In this project, I valued the way I had to creatively approach my restrictions. Because I was doing this project at home, I had to use a mouse to draw everything that I put on this mandala. This was particularly difficult drawing details precisely because using a mouse is not particularly graceful in any means. My mandala is very simple for this reason. I tried to embrace that fact, instead of fighting against it by using a very non-traditional art style. The color version is my favorite of the two because it shows the juxtaposition of the two sides I decided to draw. I have very bright colors in the ocean and very dull, gross colors for the buildings and sewage.

I learned that I can create something I’m very happy with, even though I had limited resources. In regards to finding out who I am, I reinforced the fact that I love the ocean, and I don’t like how us humans are hurting it in such a detrimental way. I recently reread and rewatched the Lorax by Dr. Suess and drew some inspiration from that. The world doesn’t have to be this way, but as of right now, it is. That is what I hoped I would be able to convey in this mandala. 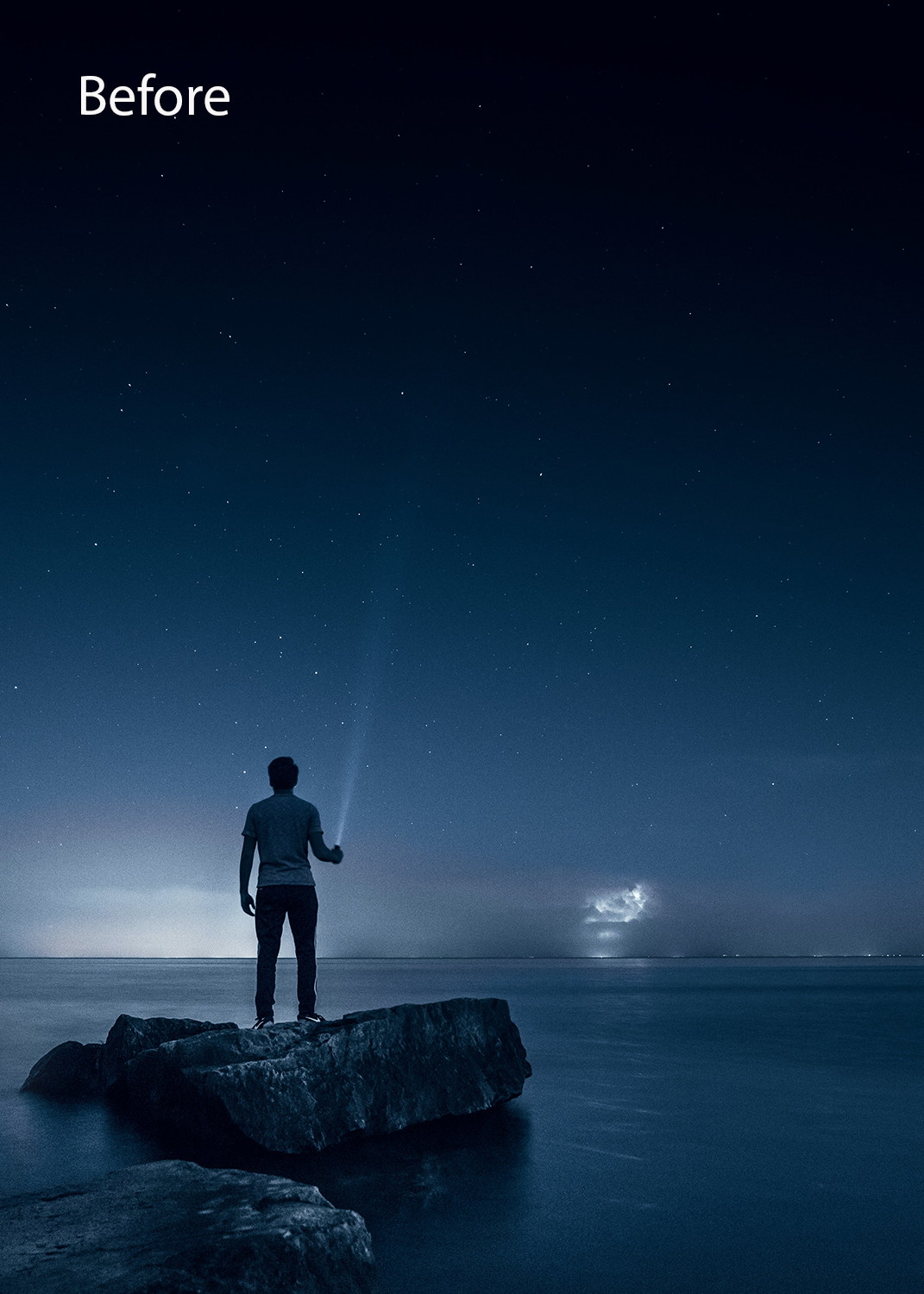 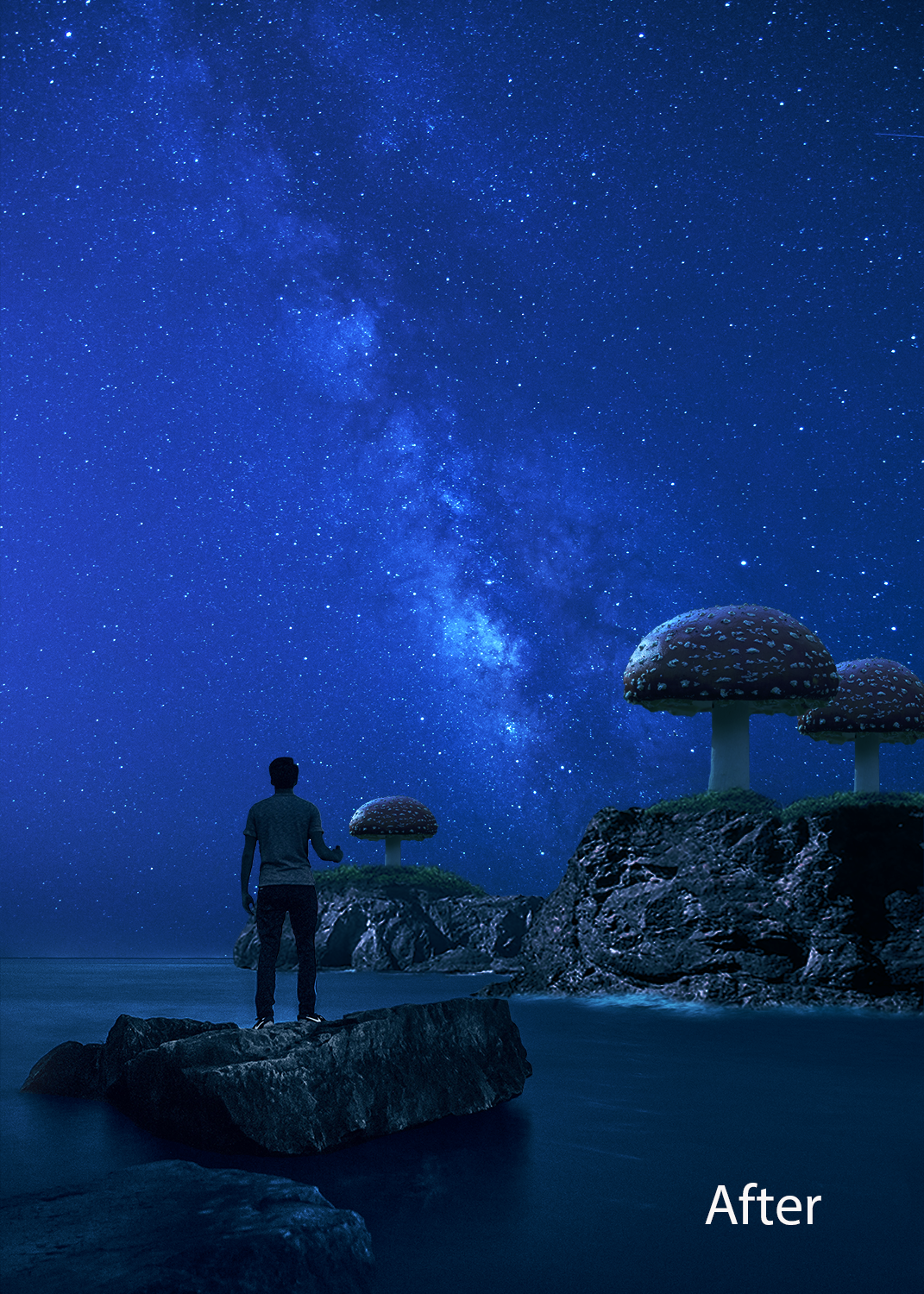 First things first, if you haven’t noticed already, look at the shoes my main subject is wearing and you will see that they are in fact Nike shoes. This will explain the name a little bit, as I could imagine a huge slogan of “Just Do It” in the sky, but I wasn’t brave enough to actually put that in. I hope that this art brings the sense of wonder and amazement that it did for me

This composition doesn’t really have any important message, but in terms of knowledge and skills learned, it is a very important progression step. Of course I am very proud of how it all came together, but the techniques I learned are much more valuable to me than the art itself. I have wanted to learn how to use Photoshop better for all of last year where I was only able to understand adjustment layers until this year.

In compositing all my photos together, I learned how to use masking layers and how to color correct the selections so that they fit better in the piece as a whole. It was sometimes difficult to be patient in making the selections, so I’m either going to have to get faster at making them while preserving the quality, or I’ll just have to learn to be more patient with this process as a whole. Because I am so excited with how my piece came together, I am slowly learning even more compositional techniques that will only make my art better. There are things that I am learning now that would have made this piece more complete, but I have to live with the fact that it is done. I won’t be touching this piece even though I am very tempted to because I want to use it as a benchmark for my first Photoshop composition that I can work from and compare to later.

This came as a result of my family recently helping out some kids from our church, whose parents were working all day. The online schooling was very difficult for them, and my mom decided to help them by bringing them to do school in our home. This Opinion came as a result of seeing how these three kids were learning in school and how it was affecting their understanding of material. In making this video, I was able to really appreciate the time and effort that goes into people making instructional videos with moving text. It took me way longer than I thought it would.

A small boy named Frankie squirms in front of a computer screen. The teacher is drawing bundles of 10’s and 100’s trying to demonstrate a complex multi-step math problem. At the end of the lesson, the teacher waves goodbye and ends the zoom call. I look over Frankie’s shoulder and realize that his paper is completely blank. The lesson is over but he hasn’t learned… anything.

Frankie is a second grader, and because his mom works full time, he comes over to our house to receive help with his school. And just like many of his peers, he hasn’t completely mastered doing addition and subtraction of single digits. However, most of his school work is multi step story problems that involve algebraic thinking. This type of stuff wasn’t being taught when my brother was at his level. (My brother is now twelve). The math curriculum in schools has changed from being based in physical, concrete interactions with numbers, to being based on virtual, abstract lectures that don’t engage students and it is hurting them.

The development of the Common Core curriculum has pushed pre-algebraic ideas into younger and younger classrooms. How do I know? My mom has helped in elementary school math labs for about a decade. The biggest change has been the focus shift from physical touching of manipulatives and playing games to trying to visualize abstract concepts for their age group all while carrying things over a digital environment. Ten years ago, there would be blocks, tiles, and objects so that kids were able to touch and understand concepts better. Now that has been replaced with online conceptualizations and lectures.

If you think back to your days in elementary school, it was mostly fun and games to help understand things. Kids now are being asked to learn in a similar way to how math is taught in high school. With the fun taken out of most activities, students are losing motivation and interest in math as well as school.

The curriculum being taught is very mentally challenging, and some kids are being left behind. Like I said earlier, it is not unusual for a second grader to have a little difficulty doing simple addition and subtraction, but because of new common core standards and a technology based format, the kids following a regular brain developing trajectory start to think that they are dumb.

When working at math, Frankie told my mom, “Oh everyone already knows this, and I dont, so I’m just stupid.” Those words should not be coming out of a second grader. Forcing these kids to push harder and harder to understand abstract mathematical concepts doesn’t give them a good feeling for going to school. At this point in their life, they should be enjoying school and having fun, not being force fed mathematical concepts that can be taught at a later time when it is more developmentally appropriate.

Putting young students on such an advanced course of understanding will not only make it hard for them to understand and like school in the short term, but will most definitely affect how they think of school many years down the road.

intro to this section and a reflection of how it was using photoshop for digital art. also what I valued.

This project was one where we could choose what we wanted to draw. I decided to do a profile of someone I met rather randomly because I wanted to give it to him on his birthday, which was the day after this project was due. He goes to school in Scotland and makes TikToks. That’s where we were able to talk and become friends. Our birthdays are actually in the same month, and he will be sending a portrait of me for my birthday as a drawing swap.

I painted this on Adobe Illustrator using a Wacom Tablet and pressure sensitive stylus. I got the painting started by taking samples of a picture of him and then laying down a small stroke. I then repeated this for the rest of the piece. This taught me how to be patient, and also to trust my eyes. A lot of the time, the color would seem off, so I had to tweak it so that the color palette remained uniform. The one thing I wish I could do if I had more time, would be to continue painting the rest of him, and not just cut it off at the neck. This painting has given me so much appreciation for people that do this kind of work for their job. It can be very tedious, but I think it pays off eventually.

In this assignment, I was able to take a photo and convert it into looking like a watercolor painting using Photoshop effects. This was a picture taken by a National Geographic photographer and I was able to create a cool border that looked like it had been painted on the paper. 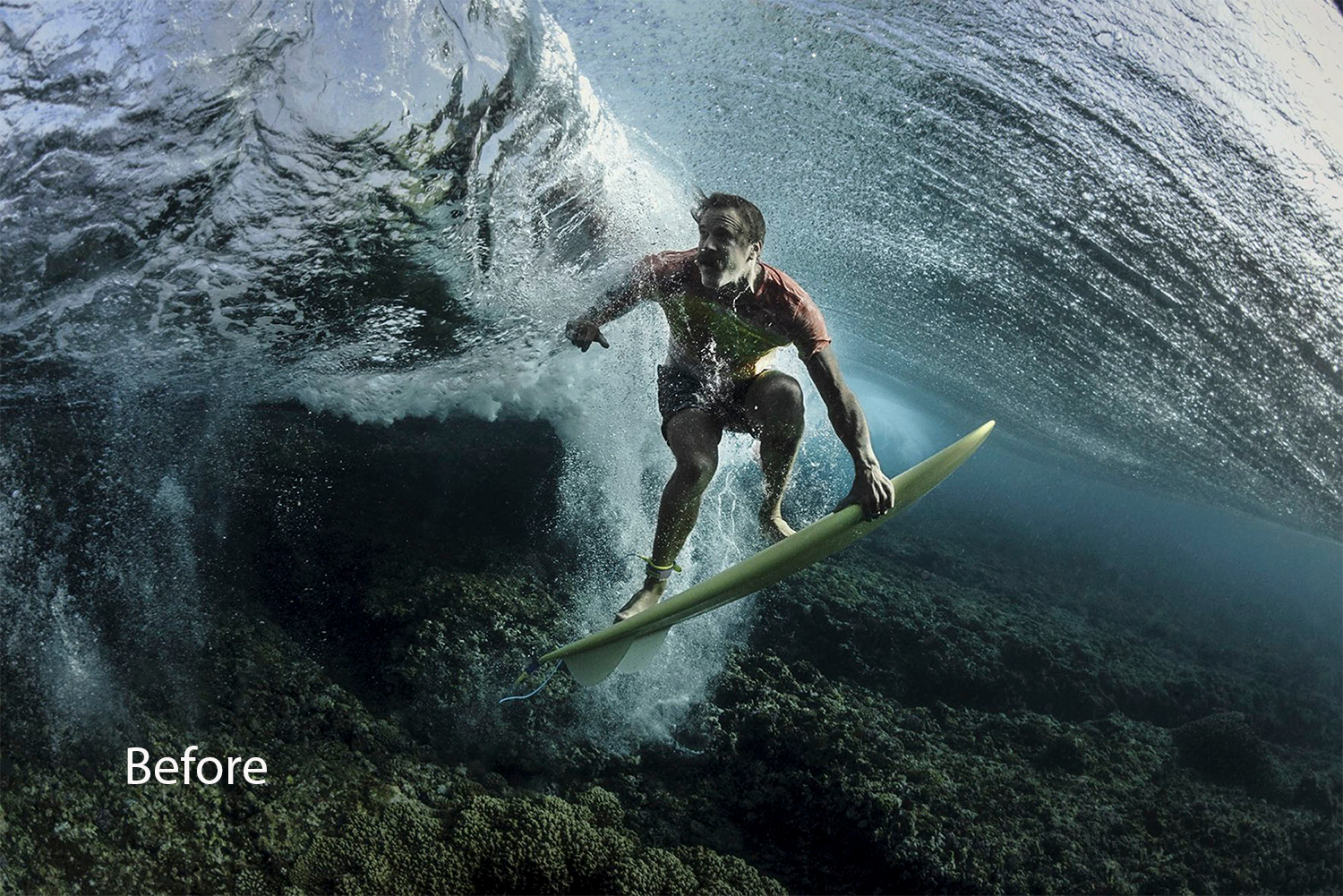 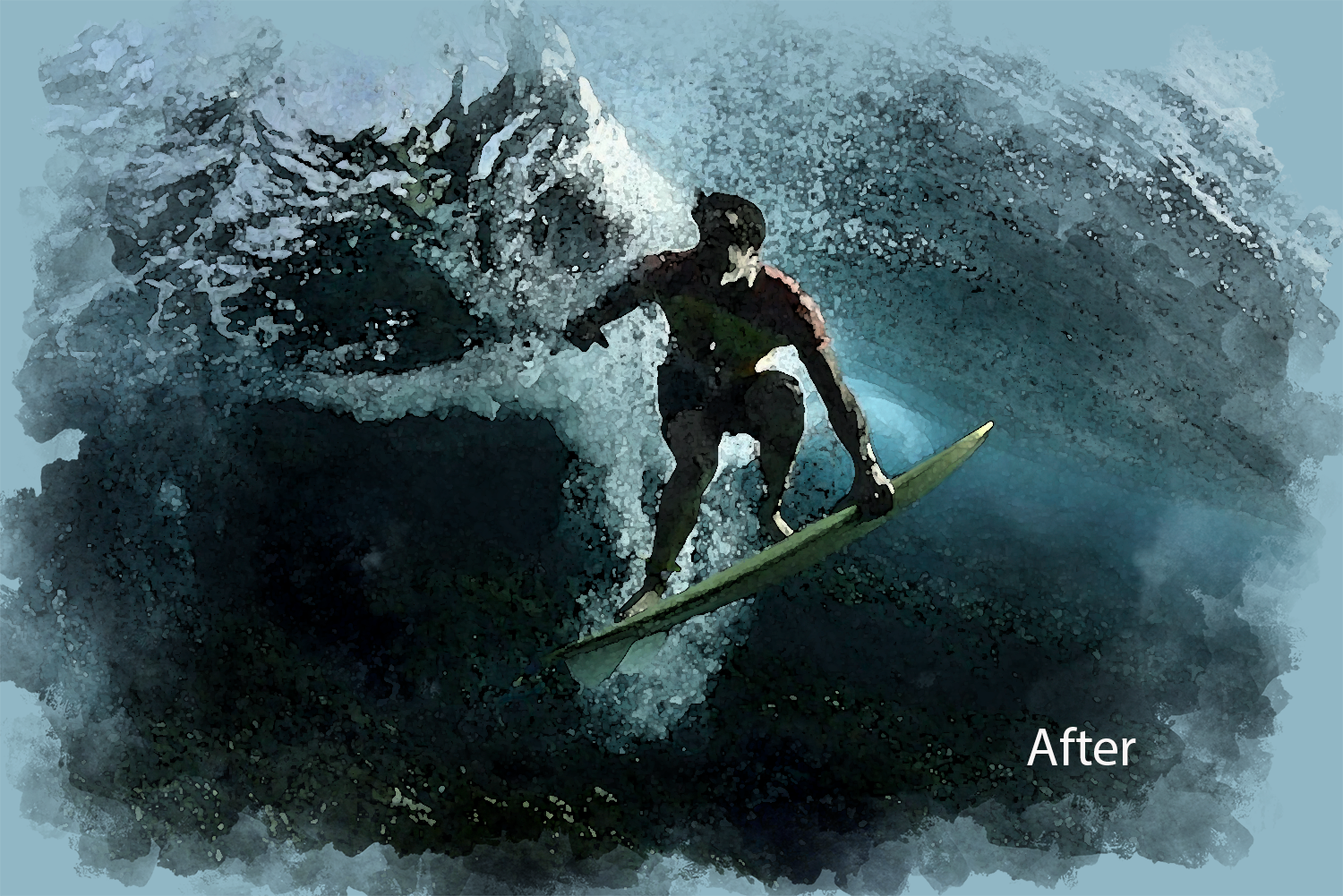 Compositing is where you mash multiple pictures into one. Sometimes you try to make it look realistic and sometimes it looks surreal. In this picture, I was able to take other pictures of flowers, and put them inside of an original portrait by Dennis Drozhzhin. This is a form of compositing where I used a clipping mask on the flowers to make them by themself. Then I cut out my person’s face, and put it on top of the flowers.

Because our class has less time, we had to pull back on a lot of the projects for this unit. I was able to do main projects, that included both digital and physical mediums.

In this project, we were tasked to make a statement from our “This I Believe” essay, and create a public service announcement out of it using either Photoshop or Illustrator. I chose to use Illustrator and make a man pulling an anchor with the words of “Holding onto the past holds you back” written at the time. This was a theme I had in my “This I believe” essay.

In this project, we were challenged to make the project more difficult for ourselves and add as much detail as we possibly could. I took this to heart and decided to use scissors and an exacto knife to cut out the details of the skeleton and flowers. Then I used glue to paste it on the opposite side to create a mirror effect. This took a long time to make, but I am very happy with how it came out.